This is mainly a maintenance release, we fixed some bugs, updated some packages, and added a few bits and pieces. The most important change is that we added support for python 3.9 which has been much requested, and as part of that process dropped support for python 3.6, since most if not all major platforms have access to python 3.7 and later.

Looking to the future, our next release will be 4.2.0, and will have an all new Admin User Interface based on the VUE framework. If I’m honest, the original AUI was mainly an experiment to see if it was possible and useful - I think we answered both of those questions and I was happy with the way the backend worked, and the event stream kept things up to date, but I was never happy with the actual browser code as it was basic and hard to maintain. So, I spent some time retooling my 00’s browser tech to bring it up to date and selected the Vue framework with Vuetify components to rework the AUI from scratch. Later today I will make it available in the dev branch for early adopters to take a look at with a view to releasing it soon. Here is a taster! 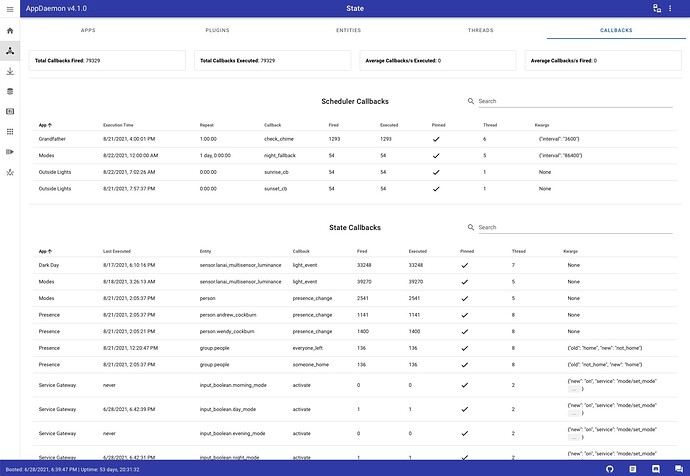 OK, back to today’s release:

Thanks for the release. Much appreciated! I was using appdaemon 4.0.6 add-on which is available with HA. I removed it and followed the docker image install guide to get this version running. However, I do not know how to make appdaemon appear as an add-on in supervisor dashboard. Is this possible? If so, please point me in the right direction.