Did you find a way, to access the addons folder?

What is the minimal config of supervisor and of HA core which work with docker v.18.09 ?

As Home Assistant Supervised is not supported on Synology the option is to run Home Assistant OS in a VM. However, not all Synology models have official VM support. This is just a hack, I’ll try to wrap this together better later. Install synoKVM from https://github.com/bsdcpp/synoKVM/releases/tag/1.6 Make sure Open vSwitch is enabled. Fire up a Terminal to your NAS and run this.# Download packages wget https://github.com/home-assistant/operating-system/releases/download/5.11/hassos_ova-5.11…

What is the minimal config of supervisor and of HA core which work with docker v.18.09 ?

You can’t run Supervisor in Docker.

I’ll try now
Hassio_Supervisor is in a Docker, no?

Did you really not read anything of what was said above?
lol

Here is a quick guide on running HomeAssistantOS on Synology VMM (perhaps we can add this to the official documentation as this is an supportedTM installation method).

Here are a quick guide to get Home Assistant OS running in Synology VMM. Install Synology VMM (only supported on some models but I managed to get it to run on my DS716+II by downloading from here) Download and extract the Home Assistan OS .ova image from here: https://www.home-assistant.io/installation/alternative#download-the-appropriate-image Start up VMM and create a Storage pool. Create a network interface (Choose Type External and select the primary Network Interface). [Screenshot 2021-…

Thank you so much.
I don’t know which way I will follow with my HA, but right now, all that I know is that I’m so thankful. Thanks to you and your amazing work, I discovered HA.

Hi, also from me and a couple of others not logged in the community - great work, fun and a very good way to get understanding and get going with home assistant. I agree with all that see it as a pity, but also want to highlight that everyone that built Home assistant are sharing the same goal.

If it would happen that you or someone else get an epiphany on how to make the installation work somehow I am all ears and would love to support with coffee/beer/patron.

I am (with several probably with me) on high end NAS but that is on the border that do not support VM.

and as for not feeling the love… you have it in the Swedish corner!

Just to conclude what I have written up there.
I’ve received my RAM extension (HyperX Impact HX318LS11IB/8), simply plugged it in and it after rebooting, the 218+ instantly showed 10GB RAM. Using Synology’s VMM to import the ‘hassos_ova-5.10’ OVA was quickly done and after waiting a couple of minutes for HomeAssistant to get prepared, the login screen was shown. Restoring a freshly taken snapshot from the old system was surprisingly simply (different to what I’ve experienced before) and the system was ready. I only had to update the URLs of my Influx/Grafana installation, because the VM has a different IP and that’s it. Updating each component and addon to the newest version went without problems and now I’m satisfied.

So what’s left is to again say thanks for the hass.io-Synology extension. It enabled me to start using HA and I’m not sure whether I would have started without it. But now I’m going to remove this package and continue using the VM way.

Comparing how quick stuff loads Node-RED instance Dockerized running on Synology host system opens 600-700ms faster than the one running on virtualized as an addon (hence also Dockerized). But, overall, I must say, no issues at all.
You must keep in mind that I don’t have any video surveillance or something that may destroy the CPU.

My setup is Node-RED, Zigbee2MQTT (this one I kept running on host Synology (dockerized) as well as the MQTT Broker, as I’m lazy to re-pair all devices (haven’t found a way to recover devices list)), VSCode, SSH Terminal and few other Wi-Fi devices like Xiaomi, Slide curtains etc. so nothing special.

With Zigbee2Mqtt the only issue or smth unusual I noticed is the fact that logs were absent after line in the log like node ./index.js, usually it’s full of logs, so I didn’t like that either. But in Zigbee2MQTT if I asked to build a map it did build one, but with a coordinator only and that’s it (CC2531), no errors or so.
But it may be caused by the fact that I “mounted” USB stick after VM launch and not while it was in a disabled state. Anyway, never bothered trying to figure it out.

The VM normally takes 5-6% CPU load and 4 GBs of RAM. It works like a charm

Guys, my DS 218+ processor load is always 65-95% after moving HomeAssistant to the virtual machine. Maybe I have wrong settings for the VM…

That is not your VM usage it’s core usage. To check the vm usage login and use the command: “top”

There is a new docker release -> https://www.synology.com/en-in/releaseNote/Docker
Maybe they fixed the problem?

That is not your VM usage it’s core usage. To check the vm usage login and use the command: “top”

Yes, sorry. Please have a look to Resource Monitor screen shot. VMM load is always around 50% 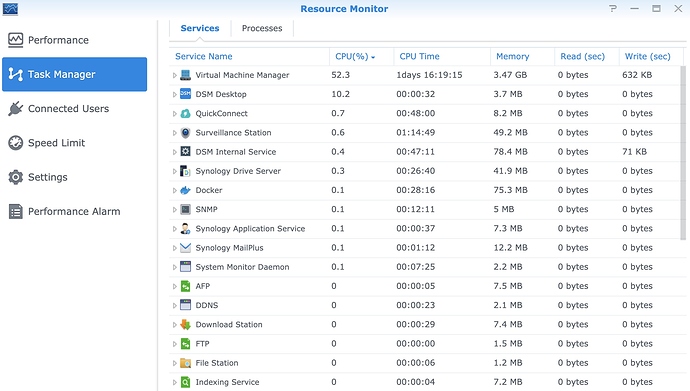 Have a look at the cpu load from the supervisor tab in home-assistant, that will show the real use.

I restarted the Virtual Machine, cleaned not used applications on Synology (docker) and the cpu load returned to normal.