Edit: though you’d miss out on all the new features like a super easy to setup interface. Personalised day/night cycle. Make changes without the need to restart. Scrolling notifications. Device counters and the ability to assign any type of entity as a badge inside of buttons. Easily create a frontpage layout with the built-in edit mode. Automatic creation of automations, battery and scenes views (no config required). Addons created by the community (you can find beautiful addons created by @noodlemctwoodle here ). You will get perks like easy updating with usually only a few folders to replace. You’ll get custom views and custom areas on existing views in where you can create either fully customised views/cards or use the preinstalled widgets which can all be setup in the UI any of the code used in those custom areas will survive all future updates! You will even get a notification if there is an update and you can check the current version against the latest within the UI. The best of it all is that every change made in the UI is instant and in realtime (you could even open a second browser to see it happen). And many other great improvements.

About screen to show if you have updates (hacs updates will also be shown here in the future):

Or what about an easy vacuum control?

And for all this all you’d need to do is the initial installation. Setting it up is the easy part!

its fixed in new declutter version

For everyone following this thread, Custom Header has finally been fixed. This means I can move forward getting HKI 2.0.0 ready for a public release. This will be released in the upcoming weeks. For those that can’t wait can still download the current beta. The current beta will get an update beginning next week which will make HKI compatible with HA 0.110.x.

Current beta testers can simply update to the public version. No need to reinstall like was the case with releases prior to 2.0.0. If you are still running beta 1 to 7 I will urge you to update to beta 10. Read the release notes of each patch to be sure you get all the new config. Most beta’s can be easily updated with the exception of going from beta 7 to beta 10 (it requires slightly more work, trust me not too much

Thanks all for the patience as this project has been in beta for quite some time now. Videos and instructions on how to install will follow after the release. The current betas are pretty well documented and you should not have any trouble installing this.

Hi @jimz011 since we can have multiple dashboards is it possible to switch between HKI and my current one or will everything be overwritten?

It will be possible. You can either have a storage (ui controlled lovelace) or a yaml dashboard. HKI can run as second dashboard (it is currently also the default setting).

Keep an eye on the docs which I will change soon on how to do this.

Great, looking forward to it!

Hello jimz011
just started with HA a month ago and your HKI was big inspiration to start, its really nice layout =)

still just play with standard HA to learn it before i wanna move to HKI.

been looking on your github code for hki, but couldnt figure what card are you using to create that picture, home status, battery and mail?
i made home status with a “Picture Entity Card”, but not sure how i can get those icons you have in left/right side with battery status and such

can you point me in right direction to what i need to use to do so?

It is actually a picture elements card.

Maybe this will help?

yes that was perfect thank you so much

also made me need to learn picture-elements

guess that will be usefull later when doing a floorplan =)

Well thank you, because of your question I have found errors in that card. Haha. Well good luck and don’t forget to join our discord channel (see link in first post).

kind of been out of the loop for awhile, but just noticed my pop-ups don’t open the card anymore, just a blank pop-up on safari and iOS, but seems to work on chrome (desktop only)… still on v1 but did I miss something breaking the cards? (mostly dbuits and the ones you modified previously I believe)

It kinda depends on how long “out of the loop” is haha. It hasn’t been updated in a while so I did not make any changes there. However when this card first emerged it did change quite a lot so yeah that might be the problem. It did break as far as I know and you might need to check the code for changes.

For more information on how to install/update please visit the link below. There is an error in the latest beta, please remove /dashboards/homekit-infused/remote.yaml to fix it

It kinda depends on how long “out of the loop” is haha. It hasn’t been updated in a while so I did not make any changes there. However when this card first emerged it did change quite a lot so yeah that might be the problem. It did break as far as I know and you might need to check the code for changes.

So just finally got around to looking into this, not sure if you remember how the old pop-ups were setup but it was vertical-stack, swipe-card, entities, pop-up… just removing that first vertical stack it’s all good again. Must have been one of the front-end changes made recently. Thanks!

EDIT: (The old vertical stack was probably from the original pop-up from before Dbuits card…)

what should be done, if i am doing it for first time.
how to configure?
thanks

Do you plan to make the code lighter so HKI would run on RPi?

I will definitely try to make it lighter, but in its current state this will never run smooth on a rpi (the reason for this is pretty simple: it uses a lot of input text entities which weigh heavy on the backend side).

The project was never made with a pi in mind simply because they are too weak imho (anyone that has used a pi and switched to something better will probably acknowledge this). The main reason it is so heavy is because everything done inside HKI is instant (e.g. adding a light to the frontend will not require a restart, nor will you need to add the light to a group in yaml) this is true for almost every setting within HKI. All changes are always instant and you could even open 2 browser windows to see it change in realtime.

Removing this heavy form of templating will make it lighter though would also make it harder to configure (like 1.1 and 0.13.3 was) it would then also require restarts after most of the changes whereas now you could leave it running forever (unless you really have to add something like automations and such).

The goal of this project was to make something simple to setup but most of all even simpler to use. I am improving the projects code but it might take a while to slim down 60k lines of code. Also I wanted to mention that if people are serious about smart homes that they should not run it on a pi (that is my own personal opinion ofc). As that little machine is the heart and brains of your smarthome. I see it often that people spend hundreds if not thousands of euros on smarthome products but only spend 50 euros on the most important piece. It feels like driving a ferrari with an opel kadett engine or running a GTX2080ti on a pentium 4 (if you get what I mean).

In other news though, I am currently learning to create Android apps and maybe in the future I will create a native app for HKI instead (which would definitely run on a rpi as the serving side).

This is awesome, thank you for sharing your work! 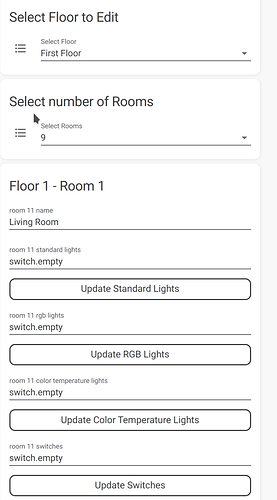 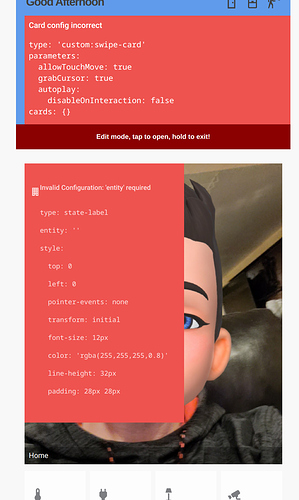