No Z-wave configuration menu in Armbian/HA

I am new to HA but I am familiar with linux. I have just purchased a z-wave USB stick and a few z-wave+ devices and was experimenting HA with it. I do have a spare RPI3 but I found it to be too slow, thus I am experimenting with running HA on Armbian with a Amlogic S912 tv box (8-core, 2GB RAM with 1gbit ethernet). The base linux I am using is balbes150’s armbian (https://forum.armbian.com/topic/7930-armbian-for-amlogic-s9xxx-kernel-5x/), the flavour of which is Debian Buster. After a clean-install to the SD card, I installed HA using armbian-configuration->Software->Softy, which installs HA through Docker.

It is much faster than RPI3. However, there is no z-wave sub-menu under configuration menu. I followed the advice here (https://www.home-assistant.io/docs/z-wave/control-panel/), and installed the “configurator” add-on. The configuration.yaml on both RPI3 (with z-wave submenu) and on armbian (without z-wave submenu) are identical:

sorry for the trivial question; it has been a long day.

The control panel isn’t displayed until you enable the Z-Wave integration. That is done either via configuration.yaml, as you’ve shown in your example, or in the UI via the Integrations page (Control Panel -> Integrations). The choice of which method is up to you. In either case, I would recommend using the usb path /dev/serial/by-id/usb-0658_0200-if00 if it exists. If you use configuration.yaml, make sure you also create a network key in case you need to do secure inclusions later. The UI will create a key for you.

If you haven’t already, I would start with reading the Getting Started section of the z-wave docs, not with the control panel docs.

where in RPI3 does it store the information about USB path to the ZooZ USB stick if it is not in configuration.yaml?

Thanks for the prompt reply. And I apologize for the lack of clarity in my original post. It was late at night and I’ve been working on the problem for way too long.

My point was that, there is no access to z-wave integration page under Control Panel->Integrations on Armbian. On RPI3 (default image) it is there, and I could enable it and specify the USB path for the USB hub.

On Armbian the z-wave integration sub-menu is simply missing from Control Panel->Integrations. That’s why I was asking about modifying configurations.yaml directly.

Is Z-Wave showing up in the Integrations page? Check the home assistant log and make sure the zwave python module didn’t fail to install.

no it is not. There is no z-wave sub-menu under the Integrations page.

If you are able (I don’t have access to my HA system from work), how do I go about check if the python model is installed properly?

no it is not. There is no z-wave sub-menu under the Integrations page.

If Z-Wave is installed, you should see something like this in the Integrations page: 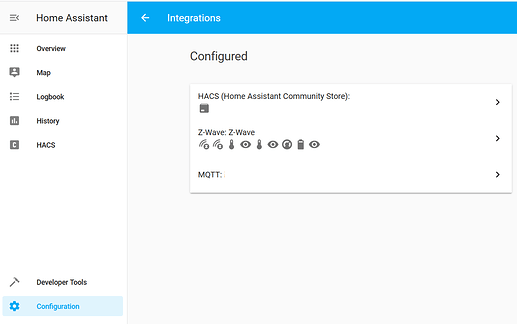 image1286×808 25.9 KB
You don’t see the Z-Wave entry at all? That would seem to indicate it didn’t get setup properly. Are there any z-wave entities available? How have you setup z-wave on the Armbian, using the UI or configuration.yaml?

As long as the integration is installed, the control panel should show up, even if the z-wave network fails to start. I would check the HA log file and make sure there are no unexpected errors.

I also just noticed you said HA was installed via Docker. If that’s the case, and it is using the official Docker image, than the zwave module is pre-installed, so nothing to do in that case. I would still check the log file for any errors.

hi, I started from scratch (installing Armbian/HD again) but ended up in the same place. Here are the screenshots.

From RPI3, under configuration: 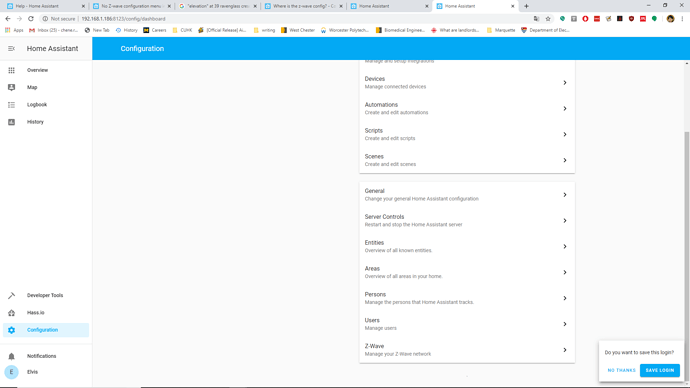 Note the last entity is “z-wave”. 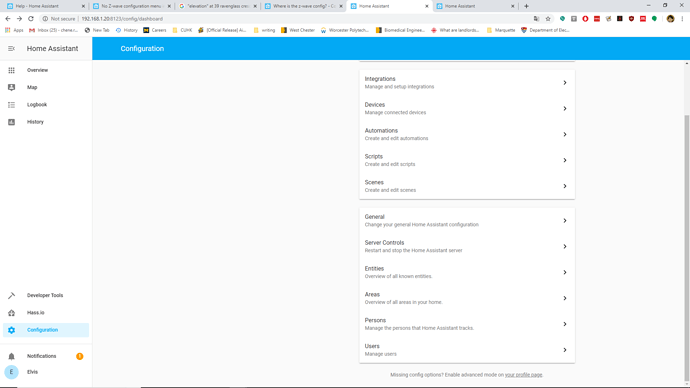 I’ll modify configurations.yaml and report back as I go.

Note the last entity is “Users”, no Z-wave sub-menu.

But don’t you have to “turn on” zwave in order for it to show up?

What happens when you hit the plus button on integrations and point it to your zwave controller?

you are right. I have to enable “Advanced Mode” and then “turn on”" z-wave.

Thank you! now, I am going to connect my z-wave+ switches,

you are right. I have to enable “Advanced Mode” and then “turn on”" z-wave.

That’s what @freshcoast was saying all along.