Some Noob questions ... some related to media_player

First post. Greetings. I want to get into HA, so I installed it on my Synology NAS using Docker. I’m trying to orient myself. It discovered my Yahama receiver so I played around a little bit with it.

A couple of very generic questions …

A couple of media_player questions. These questions stem from me trying to use the “+ Add Automation” button in the Configuration screen:

There seems to be some menu differences when you use Docker. There is no Hass.io store that I see in YouTube videos

You must have Home Assistant Container. What you are seeing is HaOS ( sometimes called hassio) which is a custom OS and HA mainly designed for the Raspberry Pi. Home Assistant Supervised is several Docker containers with similar features but it is only supported on a vanilla Debian OS installation.

Tried to make some automations using the “+ Add Automation” button in the configuration screen. So is that like a wizard, but most of you edit YAML files instead of using the wizard?

I personally usually use the UI now. Many users here are used to using YAML because the UI did not have all the needed features. YAML code is easier for sharing.

Sorry, I do not use media player.

Is Docker more limited or does it handle add-ons differently?

But you can still get all of the exact same functionality by just installing the equivalent of the add-on manually in docker.

Add-ons are just docker containers that have been modified to be able to be installed and managed by the HA Supervisor.

If you install them yourself then they work exactly the same but just outside the control of the supervisor.

how would one normally do that with Docker?

I think any text editor will work but I personally use Notepad++.

you just need to point it to your configuration files in you NAS.

most of you edit YAML files instead of using the wizard

the UI can be good for beginners but eventually you will likely run up against a wall where the UI editor will be less user friendly and you will need to edit files manually.

My advice is to just start learning to do things manually from the start and you will be way more knowledgeable and won’t struggle as much later when things will be more complicated.

And the UI editor doesn’t allow for adding comments or any organizational structures. it simply creates yaml files (in json) in one big monolithic file. If you need to find it later or want to split your config later to improve organization it is way harder.

Lastly, the UI editor re-arranges the order of the keys in the automations so they might look different than the way the yaml files are usually manually written when posted into the forums so that tends to confuse new users at times.

Where would you point me to read for myself how to improve my understanding of how to get started?

that’s pretty broad question so if you have any other specific questions then post them here.

how should I have gone about assessing the right approach myself?

I don’t use your media player so I have no idea what features/services it supports.

Related to the above, if I wanted to use a YAML editor, how would one normally do that with Docker?

I am running Home Assistant Container and installed a docker container for hass-configurator. It is an editor that can be set up to appear as a menu item in Home Assistant.It also does some basic YAML syntax checking. 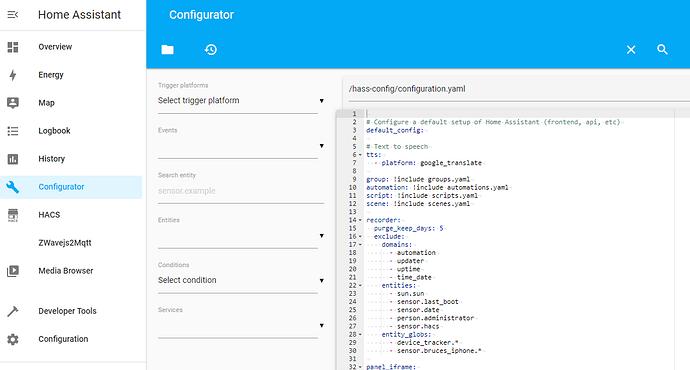 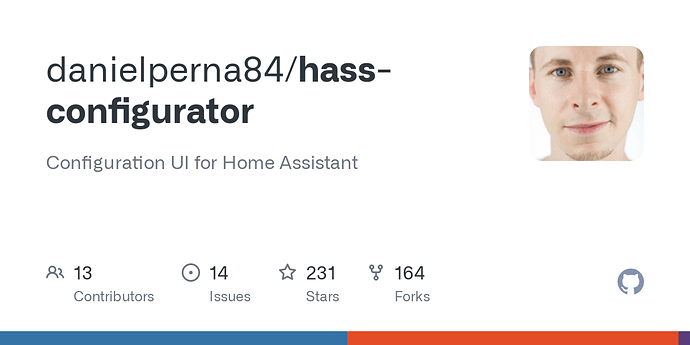 Configuration UI for Home Assistant. Contribute to danielperna84/hass-configurator development by creating an account on GitHub.

Thank you I will try that. And thank you for answering my questions. In Googling around I found a hint as to why my source wasn’t changing … case sensitive … I changed AV4 to av4 and it worked! Having fun with this.

This is all really helpful. I found a hint on another page that gave me the clue I needed for the input source … changed AV4 to av4 and it worked! I saw someone say be careful with case.

Let me know if you need help setting up Configurator. It can be a little daunting. I just use it as a YAML editor although it can do more, I think…

Tried to make some automations using the “+ Add Automation” button in the configuration screen. So is that like a wizard, but most of you edit YAML files instead of using the wizard?

If you use the ui editor, you can use the three dots on the upper right hand corner of any given automation to see/edit the yaml. You can also do this for any given block, e.g. for just a given service call in your automation. I took a long time to start using the ui editor and now I am all in. I love it. My favorite part is being able to easily tweak an automation on my phone, e.g. today I noticed a bug in one of my automations and added a timeout then and there.

Regarding your general ha edification, I recommend starting here.

A breakdown of what an automation consists of.

This is a bit of a dated thread, but in case there were future Docker people I thought I would mention that I moved away from Docker and decided to install it on a VM instead by following this really great video: How to migrate hassio to Home Assistant Virtual Machine in Synology - YouTube One thing I would say is follow his instructions carefully… even the Bios choice.