Updating to 0.115 on Virtualbox

Ok, I feel really stupid asking this but I have searched and can’t seem to figure it out, I think it’s because I don’t fully grasp the different “pieces” of HA for some reason. I have HA installed using the VDI option in Virtualbox, works great. From what I understand (i think) the Supervisor (v245) is what hosts the OS (HassOS 4.13) but not sure where the 0.115 update fits in and if I need to do something special to update it as I am not seeing a notification like I have seen in the past for Supervisor or HassOS. Any guidance in understanding this would be greatly appreciated!

The supervisor will show a link when the update is available.

Thanks, I was going crazy trying to remember how i got to 0.114…I’ll keep an eye out for it

Hi, I also don’t have the update ready on my VM…
Yesterday, I tried a manual update from my 0.114.4 version, running the following command on the terminal:

The update went well, I think, at least I didn’t see anything broken. But I’m new to HA…

didn’t retrieve a new version, so I had to use the --version option.

Today, I’m surprised to see I have a new update available to… version 0.114.4, the same one I had before.

Did I do something wrong?
Are the updates on virtual machines managed differently from the RPi ones?
Shouldn’t I see already any 0.115.x version available instead of the older 0.114.4?

What version does the info panel say you have? 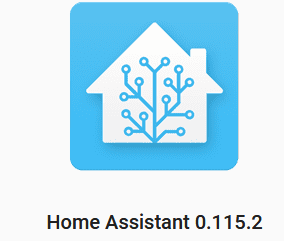 This is the version I forced the update to.

That is the latest.

There can be problems with updating the virtualbox version as the default virtual hard drive is too small. Enlarge it to 32GB or so.

FYI: The notification showed up for me shortly after posting this. I was able to update my virtualbox instance without issue.

Thanks, I had already the VM set to 32GB, and currently have 25GB free.
Today, it’s still telling me I have a new version 0.114.4 available. I wonder where this information is coming from…

I have finally a new real new version available.

While it was still showing the older 0.114.4 version, I’ve restarted Home Assistant several times, but never the VM.
A few minutes ago I’ve completely shutdown the VM because I wanted to move the .VDI file to another location, and after the boot, it’s now showing the new version 0.115.3: 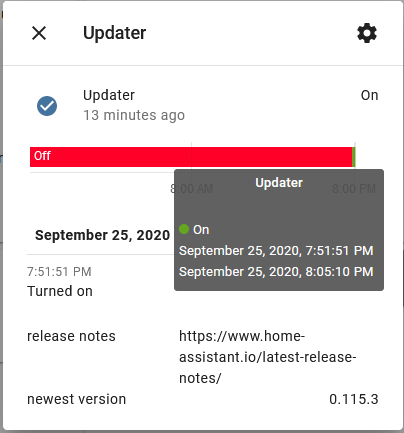 From the updater information, the time the update was found is consistent with the time I’ve restarted the VM. I’m wondering if the VM restart cleaned the issue, but definitely something to have a look the next time I get this issue (if I ever get it).