Any news on this front? I’m currently designing my new home with full automation in mind, and crazy ideas are boiling in my head…

I’m in the same boat, only have older Synology NAS’ and RPis and so I’m after an energy efficient but sufficiently powerful hardware to host Hassio (plus other process mentioned above), seems an Intel NUC is the way to go then…price vs spec? or possibly an older laptop so gain from the builtin battery backup

Hello @eon, I’m experimenting with an old laptop running docker on Ubuntu Server 18.04 LTS and it runs very very well. The laptop is a really low end one (even when was new

so performance wise it’s no big deal, I’d say it’s a bit better than the RPi 3B+. But the battery backup is very nice to have.

My next move will be testing the same solution (Linux + docker) on AWS, let’s see how that goes. If I like it I will provision the new home with two ISPs for redundancy and connect them to an AWS’ VPC using an Watchguard firewall.

Also gotta check what AWS has to offer on their IoT products.

About 2 months ago I finally got tired of having stability issues, random crashes, and automations performing poorly on my raspberry pi 3. I moved everything onto an hp 8100 i5 desktop. I have it Debian installed with a VM running Ubuntu + Hassio and I couldn’t be happier. Things are instant now. Upgrading to a new version takes less than 15 seconds. Restarting the home assistant service, and the front end is back up in less than 8 seconds compared to the 15 minutes I was up to on the Pi.

Some nice and varied tips there thanks. Although the RPi is a key target device for HA, the boot and update speeds plus other services running on the same host are also a key factor for me (and unreasonable waiting also drives me nuts) . So I think I’ll be looking for something with a higher spec for my first delve into HA. Cheers.

I forgot to mention, I’ve been running home assistant on a pi since the very early versions of home assistant. It has been a solid device for a couple years, but if you’re integrating cameras and cast devices, and wanting to actually view your history, I do suggest upgrading from a pi. I’ve had zero issues with compatibility.

This exactly. If you’re not married to the logbook and history, pi is fine, the newer one is seven better as it supports 5ghz WiFi. Not sure on earlier posts on reliability and SD Cards. I’ve been running on a class 10 Sandisk 32gb for over two years with no issues. My database is at about 650mb. GUI and interface runs like a champ on Android/IOS and browsers.

How to run on a Mac mini Server? I tried an Ubuntu install in a VirtualBox, but seems unreliable. Any other methods to install it on OSX?

Could you mention your devices and circuitry?

Synology NAS (with intel N3710 and 8GB of RAM) with HomeAssistant in Docker.

Main benefit: only one device that is always on (thus reducing power consumption) and which does so much more than only homeassistant (Dropbox replacement, Plex Server for music and video, online shop hosting, … ).

I found out by chance that my power bank was capable of charging and powering at the same time, but by now you can find that technology when googling “Pass through charging”… there are lots of em on ebay.
Otherwise I have no special circuit…the power bank is at main power and the pi’s are at the powerbank…as so often I have the cheap Xiaomi powerbank

and did not expect that feature when I bought em

Only if the database is on the SD card, if you have the database on an external HDD or NAS than HA on an SD is very reliable

Hi! I would like to ask about the “problem” with the SD Card, did you have any problem?
I’m running in a RPI 3B+ with SD Card without problem until now, but I listen in every topic issues and worries about this configuration. What can you tell us about your config and expertise all those years?
Thanks!

I have had SD card corruption, when actually running Raspbian, it’s not happeneded to me a lot but it has happened.

If you use good quality and PSU’s you are pretty unlikely to get SD corruption in my experience.

I know this is a older thread, but I am also looking at upgrading my setup. With the pi 4 here, do you think it will be a suitable replacement (Maybe using a USB SSD)? If not - is the NUC still the preferred alternative (cost for a I5 NUC in my country is (new) 7 x more than a PI4, and (second hand) 3.5x more)

You don’t necessarily need a i5 NUC for running HA (or if you do, the power of i5 can be used for running a lot of other apps). A Celeron N3000/N4000/J4005/J4150/J3455 or Pentium J5005 Intel NUC (or equivalent box from other OEMs producing mini pcs) is more than sufficient for HA (even with several Hassio addons) and price of those is not significantly higher than the Rpi 4.

You should consider the need to add to the Rpi 4 board also the cost of i) a relatively good power supply (there are some issues with first batches of Rpi 4 not recognizing all USB type C adapters); ii) quite expensive microSD card (at least 32 GB, recommended 64 GB) iii) case (not mandatory)

Obviously, if going with a barebone unit, NUC also requires a disk drive (preferably SSD) and RAM; however, (at least for a previous gen NUC) chances are you already own these from an older laptop.

As it is a relatively new product, Rpi 4 is still sold at good margins (the 4 GB version, although not in stock, is estimated at about twice the price of the 1 GB flavor). A Celeron Nuc seems the better choice compared to Rpi4 as it is more powerful (even if, in future firmware updates, it will be possible to run OS straight of the USB SSD to avoid microSD card I/O penalty) and not very pricey. Again, not to start the discussion about the likelihood of Rpi microSD card getting corrupted when least expecting

The main reason why I am thinking of replacing the pi is because of sd cards - seems that I no issues for years and now have gone through 2 cards in 3 months. So a NUC it is then, will rather save for a I5 as it can also replace my current outdated Plex server…

If requiring transcoding on the fly I would advise not going for a mobile platform: for transcoding, a mobile Core i5 processor is nowhere near a desktop counterpart and it might gasp for air with two or more 1080p streams (not to mention HEVC/4k with very high requirements); also, due to limited real estate, NUCs can’t hold significant amounts of storage and will require mounted space from a NAS.

Instead, you could try to optimize client software to use mostly direct play (if available) or direct stream instead of transcoding as hardware requirements for PMS would remain relatively low (or convert current PMS server to a file server and mount folders on the new i5 NUC running PMS).

I don’t know if this is the best, but for under $200. I used this board https://www.newegg.com/p/N82E16813157806?item=9SIAH419G25968&source=googleshopping&nm_mc=knc-googlemkp-mobile&cm_mmc=knc-googlemkp-mobile--pla-easternstar--motherboard+%2f+cpu+%2f+vga+sets-_-9SIAH419G25968&gclsrc=aw.ds&&gclid=Cj0KCQjwyerpBRD9ARIsAH-ITn9PzcPDB71F4xaI5X7G6nGTDyCbaTyKiZWOuZ4KzWMrY30HLagw2ewaAlh5EALw_wcB, 8 gigs of RAM and a crucial ssd and I have a low wattage extremely powerful, silent machine that has worked flawlessly. I liked the idea of building my own NUC and I am very happy with it.

This is my setup: 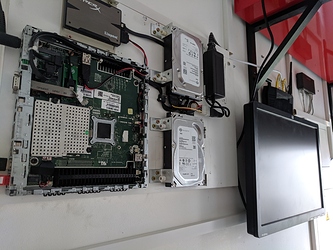 HP ThinClient t620 with 6 gigs of RAM 2x2TB storage and 120GB SSD runing Ubuntu 18.04 with Docker (Xeoma, HomeAssistant, NodeRED, Mosquitto, Transmission, Appdaemon) - 20-40% CPU usage. Kind of enough, but I’m planning on running Plex and then things would go nasty, so I’m thinking about upgrading to more powerful machine. Main requirement for me that device should have 2-3 SATA connectors for HDD, as USB3.0-to-SATA adapters was unaccetably unstable