I just got an email from Lutron Caseta. They will be introducing a fan control in March. I already have Lutron integrated with HA for some lights, so I will likely wait for this to come out and give it a try. It looks like it will cost between $60-$80. They sure are proud of their products.

I wired it behind the switch in the wall, acfual used a separate basic for the light switch as the I fan doesn’t have enough gpio pins for a 2c hardwired switches for manual control

I don’t suppose you came up with a clever way to make both the ifan and the rotary wall switch to work?

Giving this thread a bump. I am in-need of an in-canopy fan controller, and options do seem pretty slim.
Anyone have a recommendation? The load is shared with an outlet that powers a TV, so I can not use a wall-mounted switch.

Currently I have Insteon but this is my last Insteon device and I’d like to retire it.

What about a sonos ifan03 with Tasmota? Haven’t tried myself but someone wrote up a blog about it.

I have this Aubric one I am using with local tuya. I would have went with the sonos but wife liked the aubric remote better.

I’m using the sonos ifan03 without flashing over to Tasmota, using the HACS Sonoff LAN integration. It works very well. In addition to the ifan03 units, I’m also using RM443 remotes and, rather than pairing the remotes to each ifan03 (which is an option), using sonoff RF Bridges and HA automations to specify what each button on the remotes does.

Does the aubric one work well, and is there an integration?

I had thought the sonoff ones had an rpm problem with western electrical systems. They work well?

Duress there aubric one work well, and is there an integration?

It works well and is reliable for fan control. A couple drawbacks though - Medium and low for a brief second come on at full high speed and then basically “ramp down” in a few seconds. I think this is the device detecting its voltage/load and adjusting, but that can be annoying to some. There also is a beep with each command, although using “local tuya”, you can disable the beep (more below). A big drawback to many as well is there is no dimmer - light is on/off only.

The device is a Tuya/Smartlife device. The chip it uses though cannot be flashed with TuyaConvert so you are stuck on the Tuya system with it. There is an official TUYA integration, which had the fan show up right away for control, but it is cloud based. There is a “local tuya” integration, but it is a community/hacs add on. Programming it and looking up the initial “keys” is difficult if using local Tuya. This fan makes it harder with “mapping” the values. in mapping for this device in local Tuya, Fan is 1, light is 9, beep is 17.

Update - speed is mapped to value 3

Hi All, I’m using Home assistant in a docker on a Openmediavault box and I’m perfectly happy with it. One thing however does not work well and that is Tuya. Using the Tuya integration results in delays, group lights turn on one-by-one, you know the drill. Before you say ‘Tasmota, Tasmota’, that is kind of difficult because I have 25+ Tuya bulbs and 12 of them are in a chandelier high up in the stairway. Not going to take them out to flash them. Currently I installed Homebridge in a docker on… 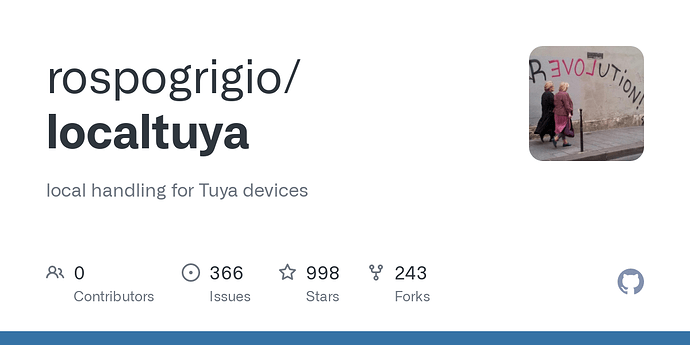 local handling for Tuya devices. Contribute to rospogrigio/localtuya development by creating an account on GitHub.

Honestly, if it wasn’t for the remote, I would have went with the Sonoff due to the complexities of local tuya. Tuya is working on making the official integration work locally in the future, so that could change things down the road though on Tuya devices. I have several Tuya smart bulbs and you can’t really compete with the price. I would be interested to hear from @qoheleth on any concerns about the Sonoff and RPM issues though.

They work well enough. It’s not so much an rpm problem (although it translates to something like that) as much as it is a capacitor value issue. However, for my purposes, the stock capacitors work well enough for me and I could always change them out for the values that are designed to give US-standard speeds to my fan.
(What it looks like in practice is that the fan still has three speeds, but low is really low, medium is on the low side of medium, and high seems normal.)

What it looks like in practice is that the fan still has three speeds, but low is really low, medium is on the low side of medium, and high seems normal

Now that you mention this the Aubric does the same thing. I’m in the US too and it’s a Harbor Breeze fan.

When I do a search in (US) Amazon with the search string smart+fan+control I see a couple of options and a couple of different styles.

Are those any good? Would they have the RPM issue like sonoff?

That disappointing, so there still isn’t really a good option.

It sounds like the ifan04 might work better but I don’t see a good way to purchase it. 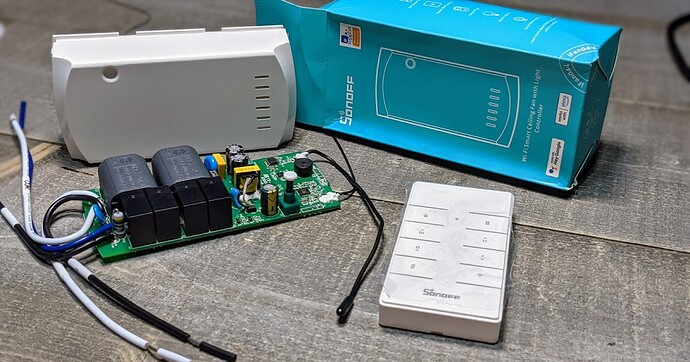 While chatting on Discord we got on the smart ceiling fan controller options or lack thereof.  Long story short there's a new listing for th...

From the link you provided, there is a link for purchase of the iFan04:
SONOFF iFan03 - Wireless Wi-Fi Smart Ceiling Fan & Light Controller (itead.cc)
I know it says iFan03 in the link, but scan down and you’ll see the option to get the iFan04 as well.

I have ordered two of the iFan04 and they work great with 110 VAC. Running the iFan03 Tasmota firmware.

Ordered directly from itead, the link above.

Hi, I purchased the Aubric Tuya based device on Amazon for $29 and as explained above it is possible to add it to Home Assistant via the Tuya integration. I am using the Local Tuya integration and after setting the device up in the Tuya Smart Life app, I was able to go into the developer section of their web site in order to pull the local key for configuration in Local Tuya. Mark Watt Tech on YouTube has a great tutorial for setting up the Tuya developer account and for getting the local keys. Once you invest the time to set this up, adding new Tuya devices into Home Assistant via Local Tuya is pretty quick. It took me much longer to get the thing wired up and shoved inside the ceiling fan canopy vs. getting it into HA! I ended up using 3M mounting strips to stick it to the ceiling inside the fan’s canopy and then taping the wires to the side of the module so that everything was flush and did not rub against the fan while spinning.

Thanks mmvav3 for the mapping values that you listed, as I was able to add all three for the fan, light, and beep controller. It’s a much better device now that I can turn off the beeping.

I am able to control the fan speed from the Tuya Smart Life app and it works fine, I don’t see how to add the fan control speed into HA, although I did see that there were a couple of other mapping values that I could try out and maybe one of those were for the fan speed.

Thanks for the info it was really helpful to get this up and running.

Glad you got it to work. It can control speed through Home Assistant- when you configure the fan you have to configure a few extra settings to control speed (which is mapped to value 3 it appears): 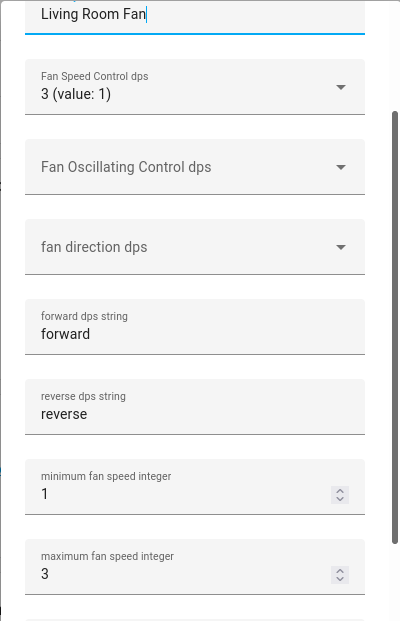 What dashboard card are you using to control the fan through home assistant?

I’m not using anything fancy in the dashboard for this. I just have an entities card that has all four fans in the house grouped together. If I want to control the speed instead of just on/off I just click the fan and then get the speed slider. The light is on a separate entities card along with the rest of the lights for that floor. 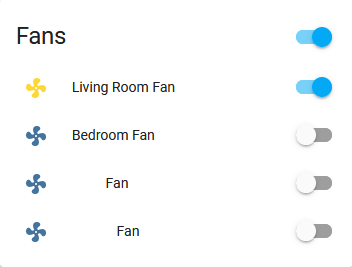 Clicking the fan brings up this: 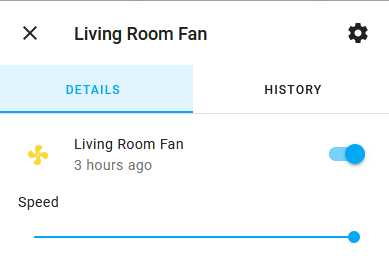 I’ve seen some nice custom examples though, like some of the ones on this thread - I would take a look if you want something more advanced

Any examples of custom Lovelace state cards? Not card cards, but state cards. Like: https://developers.home-assistant.io/docs/en/frontend_creating_custom_ui.html I have something working, but really it is just wrapping around the old style way of doing things. As such, things like override the name doesn’t work. I am not compiling, so I’m not sure I can import things from HA. If I can, I don’t know the proper path. So I can’t import computeStateName, etc. This “works” but ignores the name I…