Pulling my hair out here. Is there a way to disable any sort of sensors created by the companion app?

In the companion app itself…

I’m hoping for a server based solution as there’s going to be a few users logged in and not super computer savvy.

OK, but my response is on the very minimal information from your post so I suggest to add the clear (!) case with which the forum can respond.

Just go to the sensor, and disable it?? 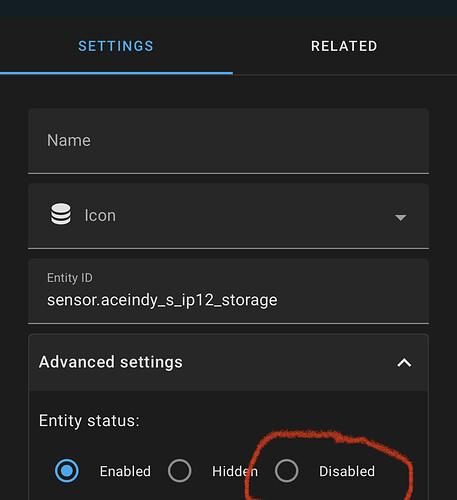 No there’s no way to change which sensors are enabled by default for new instances of the ios companion app that connect. That’s set by the app and can’t be customized right now to my knowledge.

Why does it matter though? Yes you’ll get a bunch of extra sensors dumped into your HA that you may not want. Since you said your other users aren’t very tech-savvy I assume they don’t care about what does or does not show up in HA. So you can just disable all the sensors you don’t want when you get around to it, no? Or is there some impact on these other users I’m not understanding?

Also users can’t create an account in HA from the mobile app. An admin has to make them a user account and then send them the credentials. So I mean couldn’t you just do this part for them and then disable the sensors you don’t want in the app when you set them up? How many users are we talking about here?

The use case is a semi commercial building used for a retreat centre. The staff are hoping to have the companion app to control scenes etc and there’s usually change over in staff etc.

Ah. Yea that’s probably what you’ll have to do for now. Could request a feature for that though.

Also just an FYI there’s very limited ability to do access control in Home Assistant currently. It’s really only set up for a model where you trust everyone in the system to do the right things rather then an admin being able to enforce users are doing the right things. There’s a WTH on this here but there’s no change since what Paulus posted on the current state of it here. It’s pretty difficult to configure and you’re likely hit a lot of issues if you try.

So given this I would say you would definitely want to instruct users to disable the sensors on their phones specifically. Don’t rely on disabling it on the Home Assistant side in the way aceindy is showing above. The problem with that approach is that if the sensor is just marked disabled in Home Assistant an employee could then enable it for another employee without their knowledge (or anyone’s knowledge). As long as users disable it in their phone though then even if someone enables that sensor in HA it will just say unknown.

Just something to think about in general. Your use case sounds reasonable in theory but you’ll have to consider that everyone will probably have a lot more access then a typical sysadmin would like. If a someone with a user account really wanted to break the system they almost surely could.

To prevent users from accessing unwanted features simply create a reduced dashboard with hidden sidebar for them and use an app like Kiosker to nail down the according devices (or have a bunch of kiosked tablets around for controlling the scenes.)