So I have a Aeotec Multisensor, running through the openzwave beta, pretty chuffed that it’s talking and working!

I’m trying to expose it’s temperature and humidity through to HomeKit. They are coming through fine, but as discrete accessories, rather than 1 accessory with 2 values.

Comparatively, my Eve Room multisensor (which is directly connected to HomeKit, not through the Hassio bridge) shows up as a single tile in the home app, and when tapped on, shows the three sensor values plus the battery level grouped in the resulting screen.

My daikin (which is connected through the Hassio bridge) also shows up like this in the Home app, displaying the current temperature, along with the HVAC mode and target temperature under a single tile.

Is there anything I should be putting in my HomeKit yaml config to make these two entities appear as a single accessory? I have them in HomeKit via the include entities option, and no other config in the HomeKit config other than other accessories I have included.

The main difference I see that might be making HomeKit split them is that Hassio is passing their entity IDs as serial numbers. I do wonder if I override that so that they both have the same serial number entry if that would make HomeKit group them, I just don’t know where or how I would do that.
The “Model”, “Manufacturer” and “Firmware” fields are all valid (though the firmware entry is Hassio’s version, not the firmware being reported from OpenZWave, but I’m not too concerned about that)

Anyone know how I could override that serial number value, or otherwise get the two sensors showing as a single device in HomeKit?

To add some context, Screenshots!

The tiles. Eve Room on the left, Daikin in the middle left, Aeotec MultiSensor are the two right ones

What I’m aiming for the Multisensor to come up like 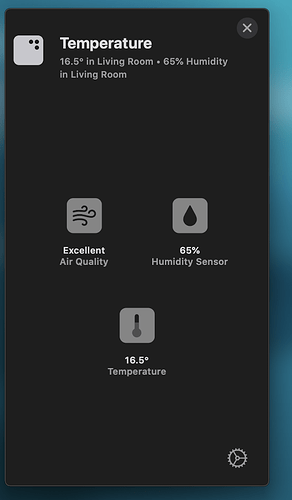 The meta-data provided for the Multisensor Humidity 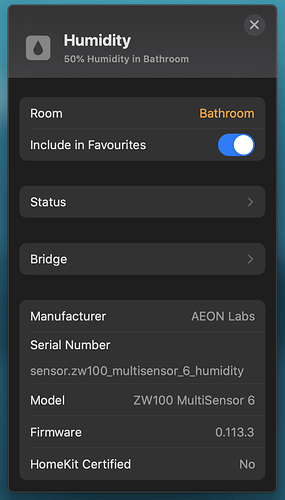 The meta-data provided for the Multisensor Temperature 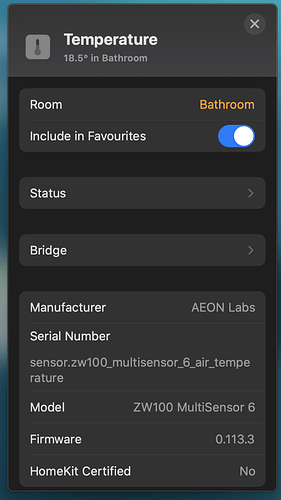 have you found a solution for this?

Sadly not yet. It really seems like either modifying the homekit controller integration will be necessary to solve this

I posted a feature request for it a while ago, so if it would be useful to you, hit it up with a vote

I’m hoping we can get HomeKit to be a little neater by allowing multiple sensors to be grouped into a single tile when they are provided by a single device. At the moment, each entity you add to HomeKit in YAML or via the main interface gets it’s own tile in HomeKit, and is treated as a standalone device. So my temperature sensor that also reports humidity, light level, UV level and motion appears as 4 devices on my iOS devices. In the following images, you can see my Eve Room (which is direct…