If you don’t compact your database (whatever is appropriate for the database platform that you are using) would you even notice a change? I’m more familiar with with SQLite and MySQLand they won’t release unused space unless you vacuum (SQLite) or optimize (MySQL).

The default auto_purge will not repack

So far with the tweaks from this thread and the 0.112 beta, my database size for my 14 day purge interval is down to 2.8GB from 6.6GB and looks like it’s getting lower.

Is this the correct format for my exclude.yaml?

six spaces, that’s what i copied out of my config.yaml

You could use SQL to get the database size. It wouldn’t be exactly the same as disk allocation, but it should be close.

Above is for an installation on MariaDB. Adjust the database name (table_schema) as needed, or remove the WHERE clause entirely if all you have on that service is your Home Assistant schema.

You’d get something like the following (here produced using phpMyAdmin):

This week my SD card failed. I’d had a notification of a power issue at some point, which I foolishly ignored. Soon after my SD failed and I had to restart. I had some ‘faux’ backups so it wasn’t too bad. First thing I did was to create a real backup using the snapshots, the excellent Hass.io Google Drive Backup, IFTTT and Dropbox.

Next I am looking at logbook, history and recorder. A long time ago I’d thrown date, time and weather into my excludes but now I am wondering what do I really want in there past what’s useful for troubleshooting and whether this is even an issue with the new DB changes. I run HA from a RPi 3 model B, official psu and now SanDisk Extreme 64 GB microSDXC A2 App Performance as the previous card was the 32Gb with A1 and I noted that the A2 is the recommended one.

I know many people recommend upgrading from the Pi, but for me personally the Pi has many advantages;

Now I have a ‘true’ backup I am thinking that if the SD goes again, I’m just a £15 SD card and a few minutes away from being back up and running, which seems a much cheaper option than everything that would be involved with moving off the Pi. Has anyone switched from the Pi to the NUC and felt that there wasn’t much gained from it? I appreciate that it’s a little early with 0.112 to really judge the DB stuff.

With this methodical application of excludes and the improvements in 0.112 my 7 day database has fallen from 1.5GB to 240MB, which is an 84% reduction in size. I still have all the graphs and history I was interested in (pages and pages of graphs).

I have read this thread from the first post by @tom_l, and this is what I have done so far…

I request guidance from @tom_l to proceed with the Mariadb part.

In your earlier post in which the worksheet data is sorted, just after this you have defined recorder.yaml code.
The begining is
db_url: !secret mariadb_url
Can you explain please. FYI I have not added anything to my secrets.yaml file.
I have started Mariadb in which a login (username and password has been defined)
What is to be added to the secrets.yaml file?

And the documentation in the addon (supervisor / mariadb ) for generating this URL.

Setting up MariaDB is beyond the scope of this guide. If you have further questions search the forum or start a topic in the configuration category.

Along with this I have added these to my configuration.yaml

All three are trapped in the check config step.The error is

How do I get to have recorder, logboog and history congiguration in seperate files?

In logbook.yaml, that is the culprit. Same for history and recorder.

Thanks @francisp!
With your help and this post I am able to choose what I want for the record a, history and logbook.

I have reduced my database by a third, from 1.5GB down to 1GB, over the last few days and it probably has further to go as the old data gets purged.

Hi @tom_l how did you configure this MariaDB size daily graph?
Will be great if you share…

That was done using InfluxDB and the Grafana addons. See: https://youtu.be/m9qIqq104as

Also make sure to use includes or excludes to reduce the size of your InfluxDB database.

You can get the DB-size with a sensor.
Use almost the same url as for the recorder. 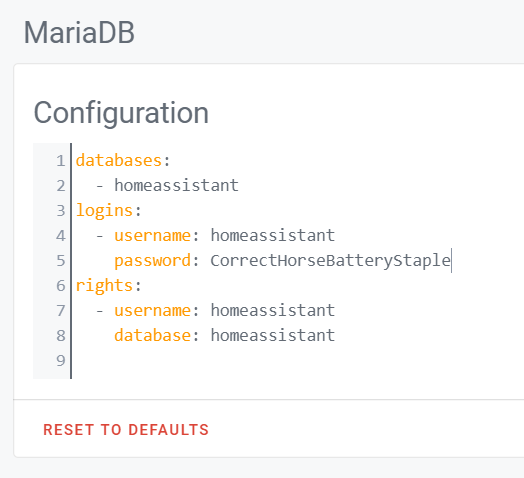 Is there something similar, reliable for an InfluxDB?

Is this what you mean?
I have no idea no where I got this from