Okay, but that’s not what you wrote initially - you wrote that you use median to not spam HA but get fast value changes.

Median isn’t the right tool to achieve that.

It’s kind of strange that you get spikes like that, haven’t seen anything similar with my unit and would still assume that the values are correct, maybe the fan just kicks up some dust from time to time or the fan collected some dirt on the fan blades which falls back into the sensor when it turns off?

Anyway, yes median is able to filter out outliners. But I would stack a sliding average over the output anyway, to avoid that you send flickering values in short succession to HA, but instead combine those values to get more precision.

I use the median in combination with a delta of 1.0, Sensor Component — ESPHome so the difference between last sent value and the new value being sent to HA need to be at least 1.0 to avoid the flickering.

Has anyone got a mod to quieten down the fan? I can hear mine from about a meter away spinning up. Don’t think it’ll be usable in a bedroom as I’m sure the fan spinning up will keep me awake.

Had the same issue. It was an annoying sound in our living room. I connected the + (red wire) from the fan to the 3.3v from the Wemos. The GND (black wire) is still connected to the original connector.
In this way the fan is still controlled by the IKEA PCB, but at a lower voltage (and speed).

Don’t know if this will impact measurement…

Can you please explain your logic here?

I wanted to connect the fan to 3.3v, to reduce noise; as described by Hypher.

I only reconnected the + / red wire to 3.3V.
Later on I discovered that the fan was still turning on/off (which was not my objective

). It appears that the fan is controlled via it’s GND connection 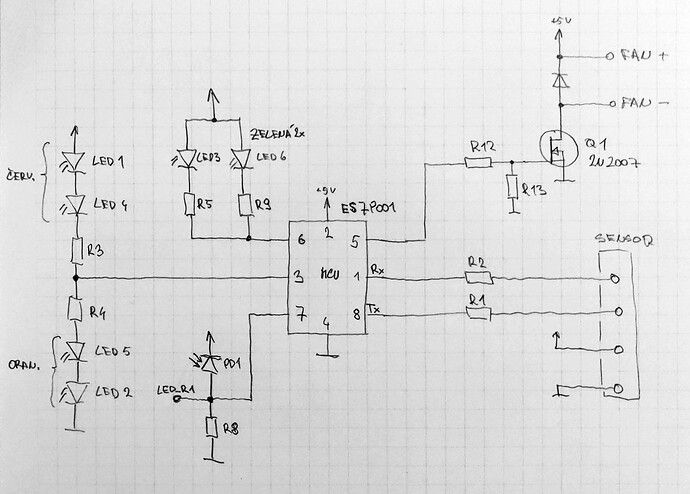 I can imagine that a lower fan speed will result in a lower air flow. Might result in the sensor seeing less particles per unit of time; measured values might be lower than 5V fan.
But because the measurements seems to be optimistic (see post 72 in this thread), I don’t think the lower fan speed should be an issue.

Thanks! That drawing explains a lot. Interesting solution with the transistor. Everyone would think the opposite way, I guess.

@sermayoral, have a look at this:

Cubic came back to me: ‘After confirmation with engineer, the DF7/8/11/12/13 are the Reserved byte.’ I guess these bytes are not for us.

Sad. Would be cool to get PM10 and PM1 measurements, too. Can we plot them to confirm that these don’t contain useful informations?

Can we plot them to confirm that these don’t contain useful informations?

Adding an export for them, clearly marked as ‘unknown value’, would be a small change to the driver. I’ll think about it (of course, anybody else is free to PR such a change as well!)

Anyway, here’s my config which also exports the power consumption and enables the Vindriktning to be shown properly in the Energy Monitoring:

The power consumption is what I measured earlier plus 10% inefficiencies for the power supply.

Have a look at the post above. It has a link to Twitter where you can find a sketch of the PCB and you will find the LEDs as well on that.

I wanted to connect the fan to 3.3v, to reduce noise; as described by Hypher. I only reconnected the + / red wire to 3.3V. Later on I discovered that the fan was still turning on/off (which was not my objective

). It appears that the fan is controlled via it’s GND connection I can imagine that a lower fan speed will result in a lower air flow. Might result in the sensor seeing less particles per unit of time; measured values might be lower than 5V fan. But because the measurements s…

So yesterday I added 2 sensors in the Vindriktning and a Wemos D1 mini:

I looked a bit further for the LED’s, it seems green leds are connected to +5V and via R5 and R9 to the µC. Difficult to control as the are on +5V allready. Same problem for the other LED’s…

I was wondering if it wouldn’t be more easy to create a new PCB for Vindriktning, than it would just be a PCB swap and done, what you guys think ?
Did anyone was able to make the particular matter sensor work straight from the ESP ?

I used a BME680 for CO2, VoC and temperature etc. ESPHome offers a temperature offset option for the BME680_bsec sensor. I have set it to 1, and the temperature now corresponds roughly with another temperature sensor I have standing next to the Vindriktning.
My idea was that the more sensors you add to the box, the more heat is generated. So investing in one single sensor seemed logical to me.

For me, it’s not the sensors, nut the Wemos making the heat… and yeah, it stays a small box…
Will try with the offset.

I think every component will generate some heat. Some more, some less. reducing the number of components will also reduce the heat. I had a D1 mini without pins, so I soldered the wires directly to the Wemos and placed it under the fan. The BME680 is taped to the top of the vindriktning, so the distance is as big as possible.

Hi, thanks for the config - I use it for my sensor. But for some reason I am getting unknown for the air sensor: 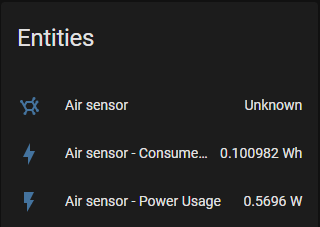 Hey, guys! I’m looking at the IKEA PM sensor mod but I also want to squeeze a mhz19 in there and both happen to connect over UART. So question is - can the wemos d1 mini support two UART connections (as I imagine one cannot be shared)? Is there an alternative small board (~45 mm long) that can handle two UART connections?

Have a look above, someone has done it:

Pleeeeeenty of room for more stuff inside!!! I manage to install a mhz19 (temp and CO2) and a MQ-9 (CO) After a few days working very well I´ve decided to open a wee hole for the MQ-9 because of the heat it generates, not much tho but it affects the MHZ19 temperature sensor. This is my esphome code esphome: name: sensor-aire-ikea platform: ESP8266 board: d1_mini api: ota: password: "xxxxxx" wifi: ssid: "xxxxxx" password: "xxxxxxxl" ap: ssid: "Sensor-Aire-Ikea" passw…