I would not recommend trying to use an Rpi4 to run Proxmox. It’s very much underpowered for this sort of thing.

Yes I understand that the RPi4 is underpowered. My production HA system is running in a NUC i5 flawlessly. But that is still a docker system. I want to move that to a Proxmox 7 install. But in order to do that I thought I better could get some experience with Proxmox, since that is new to me.
That’s why I wanted to create an test/development HA system in Proxmox in an RPi4 which I have for this purpose (It has an ssd and runs HA/test in Docker).
But searching for How-To’s on RPi4, I found only negative advices to take this path.
That’s a pity, I have to find an other way to make myself familiar with Proxmox…

Thank you for your reactions.
BTW, I shoud have read in the first line of your tutorial that it was meant for X86/64 machines. Sorry.
Kind regards, Bert

EDIT, I am going to give it one other try; found this tutorial: [TUTORIAL] - How to run PVE 7 on a Raspberry Pi | Proxmox Support Forum
And maybe I’l try an old laptop as @tteck suggests. But I am afraid that is not a 64 bit processor…

Proxmox works very well on older laptops, if you have any lying around.

And the bonus is a built-in UPS

Thank you so much for writing and maintaining this wonderful guide.

Can you update your script to change sata to scsi0?

Is there a way to change from sata to scsi0 already running vm with ha os? Or should i create new vm to be able to change it?

Create a new VM is the only way. Be sure to make a backup first

I shut down my VM and changed from sata to scsi0 without problems!

Anyone else having issues with a clean install? I keep running into the dockerhub rate limit, even after creating an accout (to increase the download limits). Is there any way to pace the installation to fall below the limit?

Further investigation revealed the Netgear router (R6260) only sends out it’s own ip address as the DNS nameserver address. The timeouts built into upgrading or installing add-ons are short enough that passing the DNS requests thru the router first cause the requestes to time out and never complete. The workaround is to use the home assistant cli interface to set the ipv4 interface to static, which enables setting static dns servers for HA directly. I set them to 1.1.1.1 (cloudflare dns) and everything completes successfully.

Hello I try to run the script on a PVE 7 fresh install and I get an error message:
[ERROR] [email protected] Unknown failure occured.

Don’t know what to do about this

Are you using btrfs? if so it won’t work with the current scripts. It relies on subvol instead of raw

yep you are right I’m in btrfs (raid1) for Pve install
I manages to install it manualy via cmd line finally.

@kanga_who May I know how is the CPU usage for your HA VM? I have an old HA VM with Proxmox 6 in an old notebook. It was running very well till few months back when the CPU usage is always hovering around 90-100%. I used 2 cores of CPU. When it was doing fine few months back, the CPU would be around <25%.

Thinking something could be wrong, I installed Proxmox 7 in a newer Dell 7080 micro I recently bought and again use the script to create the HA VM. With HA being totally bare and I have not setup anything yet, below are the CPU usages…

Did the newer versions of HA uses more CPU?

No issues for me 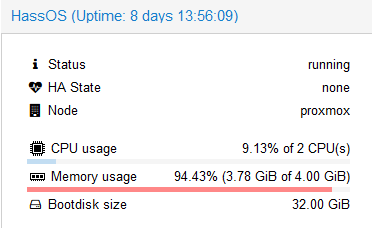 I found the culprit. It is actually the old HA VM in the Proxmox 6 notebook. Once i turned off that VM, all systems CPU usage went down to <10%.

Not sure what is wrong in that VM. I have not changed any settings so far except upgrading versions. Looks like now I have no choice but to force myself to move everything to the new 7080 micro. Hopefully everything will turn out fine.

Update: Moving to the new system did not help after I configured network. As I have 3 networks that HA is connected to, the mDNS implementation of HA was causing issues even though I have not changed any settings previously both on my network and HA. I now have resolved the problem with a very simple fix that I mentioned in the other thread (Setup VLAN and HA tutorial - #66 by skull29). Hopefully it helps anyone encountering the same issue as me

@kanga_who this might be a stupid question, but is there a reason why you recommend putty instead of using the Shell option that is available within Proxmox?