Light not detected as offine when switched off

I have a bulb (a Philips LWB006) that is turned on and off with a normal switch. Unfortunately ZHA still reports the device as available (and turned on) when it’s switched off at the wall. 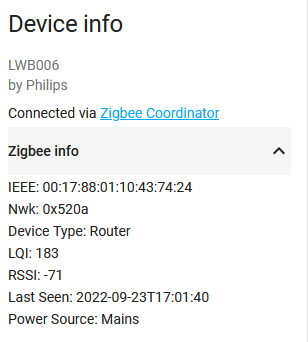 Any suggestions would be amazing!

I have a bulb (a Philips LWB006) that is turned on and off with a normal switch.

What do you mean by “turned on and off with a normal switch” exactly? I ask because you are not supposed to purposely cut power (ON and OFF too often) to any mains-powered Zigbee devices for example smart lightbulbs when they are a part of a Zigbee network because they are normally used as Zigbee Router devices (also known as Zigbee repeaters and Zigbee range extenders)? If you keep cutting power to Zigbee Router devices then it will screw up your Zigbee network mesh as it normally only updates the routes between routers once about every 24 hours in a normal environment.

ZHA will not know the status is you have cut the power because the device have not used Zigbee to report that it has been powered off (as it really has not), though the “last seen” should not be updated no more.

Really, if you plugin mains-powered Zigbee devices for example smart lightbulbs to a power circuit with a manual switch like a ceiling lamp-socket with a wall-switch then you are supposed to first disable that manual switch, bypassing that wall-switch wall-switch and usually replace it with a battery-powered Zigbee switch/remote with a wall-mount instead or install a "smart switch module like the Philips Hue Wall switch module without built-in relay behind the wall-switch in order to convert that wall-switch into a smart remote switch, or replace the whole wall switch with a smart wall switch (still bypassing power for the smart lightbulb).

The alternative is to only install a smart wall switch or smart switch module with built-in relay and do not use a smart lightbulb but instead use only dumb lightbulbs that are dimmer compatible.

The alternative is to only install a smart wall switch or smart switch module with a built-in relay and do not use a smart lightbulb but instead use only dumb lightbulbs that are dimmer compatible.

Anyone tried these Phoscon Kobold branded smart dimmer switch modules from Dresden Elektronik? https://phoscon.de/en/kobold [image] Has anyone tested these Phoscon Kobold modules in Europe with relatively low-power LED lights? They look a lot like other unbranded Zigbee 3.0 smart dimmer switch modules from China but coming from Dresden Elektronik / Phoscon I expect high quality and firmware to be maintained for a long time. https://github.com/dresden-elektronik/deconz-rest-plugin/wiki/OTA-…

ITead SONOFF ZBMINI-L Zigbee 3.0 Smart Switch without neutral wire looks small enough to fit all? https://itead.cc/product/sonoff-zbmini-l-zigbee-smart-switch-no-neutral-wire-required/ It is meant to be fitted into a junction-box/back-box behind your existing wall switch and used to convert/transform any dumb wall switch into a smart wall switch which will work over Zigbee 3.0 https://sonoff.tech/product/diy-smart-switch/zbmini-l/ [image] [image] [image] Supported rocker light switch …