I’m pretty sure the badge is supposed to go after

thank you!
I’ll take a look at this remote and try to implement a Controller blueprint for it, then add support for both the Light and Media Player Hook.

I’ll let you know as soon as the controller is supported.

you’re definitely right, thank you for reporting.
Original post has been updated with your suggestion.

Thank you for reporting here, I’m sorry for what you are experiencing.

Does this setup (E1524 Controller + Media Player Hook) work if you don’t add the pure ZHA automation?
Are there any entries in the Home Assistant Logs related to automations or blueprints?

I’m happy to inform you that I’ve just added a Controller blueprint for the IKEA E1744 SYMFONISK remote, you can find it here:

Moreover, support for the remote has been added to the Media Player and Light Hook.

If you have any suggestions or you want to leave a feedback about the blueprint for the E1744 controller, we can continue the discussion there.

I’ve published an update for this blueprint, which adds support for the IKEA E1812 Shortcut button and fixes a naming issue for the IKEA E1743 Wireless Dimmer.

If you had previously used this blueprint with an IKEA E1743 and you’d like to update it, you’ll need to fix your current automations. Please make sure that the value for the Controller model input in automations generated by this Hook is exactly equal to “IKEA E1743 On/Off Switch & Dimmer”.

Follow-up of the following question received in another thread:

Thanks now it works perfectly! Now I’m trying to configure the symfonisk dimmer to control a media player, I followed the instructions and I can only increase the volume of the receiver, in the input text created I can only see the brightness_move_up text and when I try to turn left or click the button does not change the input text. in zigbee2mqtt config I have correctly set the entity with: legacy: false How can I solve?

thank you for reporting.

Please post here the configuration for both the Controller and Hook automations you’re experiencing issues with.

Moreover, did you notice any entries related to these blueprints in the Home Assistant Logs?

I’ve just published an update for this blueprint. You can now specify the number of steps to go from min to max volume when controlling the volume, both for short actions (button press etc.) and long actions (rotation, button hold).

This allows to configure a finer and more precise volume control, which you can easily customize for your media player. You can find more about this new feature in the docs.

The added setting for adjusting the volume control sensitivity is awesome. Thank you!

Hello,
I have a IKEA E1524 remote and I created 2 automations based on your blueprints :

Here is their respective yaml :

Do you have any yaml examples I could copy/paste somewhere ? Thanks !

The Media Player Hook maps the center button short press event to the “play/pause media” action. However, you can configure a custom action in the controller automation to run for the center button double press event, which is not used by any of the currently available hook configurations.

Here’s the updated YAML for your controller automation:

If you want to learn more about controllers, hooks and the different available configuration options, you can give a reading to the Controllers-Hooks Ecosystem documentation. I’m planning to add a TL;DR version of that doc page, as well as a detailed FAQ section. Both of them will act as a quickstart guide for helping users to setup controllers and hooks on their systems.

Moreover, I can see from your YAML config that you’re using an outdated version for the Media Player hook. I’d like to suggest you updating the blueprint to the latest version (currently 2021-10-29); thanks to the good work of a kind contributor, during the last couple of days I’ve published a major update, adding support for alternate Hook mappings (more of which will be added in the near future for currently supported devices), and fixing a few naming issues for supported controllers in hooks. Since this is a breaking change, I’d suggest you to read the blueprint’s changelog and update your hook configuration accordingly.

Please let me know if you’re able to achieve the desired setup with my suggestion.
Thank you!

After some more testing, I was able to launch a radio stream when clicking the center button.
I was also able to increase/lower the volume thanks to the up and down buttons but I had to explicitly code those 2 actions when I thought they would be automatically embedded in the Media Player hook => this is where I’m not sure I totally got it

Maybe it has something to do with the 2 required fields I left blank in the Media Player hook ?.. 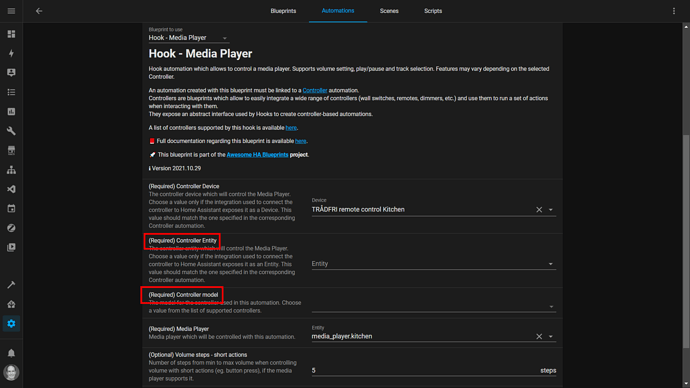 Another confusing thing (if it can help anyone else) is that you need to call the service media_player.play_media to play a TuneIn stream and NOT media_player.media_play that does exist as well ! (note the reversed words)

Hi @JeromeO, thank you for your feedback.

Maybe it has something to do with the 2 required fields I left blank in the Media Player hook ?..

By the way, I can see from your YAML that you correctly provided a value for the “Controller Device” input in the media player hook. The issue might be with the controller_model input. Version 2021-10-26 introduced a breaking change for this input, as described in the blueprint’s changelog:

Please select a valid value for the controller_model input while configuring the blueprint from the UI. The value should match the full name of your device. You should then be able to control the media player’s volume without having to configure custom actions.

Thank you Matt for taking the time to guide me !

I updated the Controller blueprint to 2021-10-26 and created a new automation based on it.
I also added the missing required “Controller model” in the Hook Media Player automation like you mentioned.

(it does launch in a basic automation without the blueprint)

If I click “Run actions” in the Controller, nothing happens either.
In its Trace Timeline, I have the following error :

[Update] I have another Ikea remote (E1810 that one) using your Controller/Light blueprints.
It was working fine until I decided to update the Hook Light to version 2021.10.29.
I re-recreated 2 automations from scratch for this remote/light to no avail…
The error in the Trace Timeline of the Hook Light is also :
UndefinedError: 'dict object' has no attribute 'event'
So my problems might have the same root cause.

The up/down buttons do not change brighten/dim the lights though.
The left/right buttons (arrows) do not change the kelvin either.
What am I missing ?

[Update] Hmm, I was a little too enthusiastic and I have a funky behavior with that Center button (toggle on/off) : once I start using that button, the group of lights remain “on” in the Lovelace interface, even when they’re off (they’re literally off and my LIFX app shows them as off) and I cannot turn them off through the virtua button in Lovelace

I went to the Developer tools and emptied the value of my new input_text.dining_room_lights_last_controller_event helper, reloaded Input Texts in the Server Controls but none of that unblock the status in Lovelace.
Only when I restart HA does it reset the status lights to its real off status

[Update 2] Ok, nevermind the funky on/off behavior. It’s working fine now. Must have been a temporary glitch.
It’s just the left/right and up/down buttons that do nothing :-/

I can start the TuneIn stream with a Center button short press but I cannot find the right command to stop a radio stream.

Here is the controller :

And the Media Hook :

is it possible to use this controller with Styrbar IKEA E2001/E2002 via deconz/phoscon?
It doesnt show up in the list of selectable devices?