Hi all out there.

I have a few considerations which I like to sort out. I started to do some home automation with Sonoff stuff. I was/am quite happy with what these guys have been cooking. Cheap an reliable but in term of interfacing rather limited. So somehow I got onto HA. At first sleepless nights for a few temperature graphs but by now 6 months later I am comfortable with the HA environment. I feel super nerdy actually but by now I have made an alarm system, I monitor the performance of the solar heating of my pool, I have my floor heating online, I am saving money on electricity (quite considerable), I monitor and control my irrigation system ( btw I try to link a Sonoff th10 with a capacitive moisture sensor, newest project) and I control my network and performance of my raspberry PI4 with 64gb card. Here some screenshot for the feel: 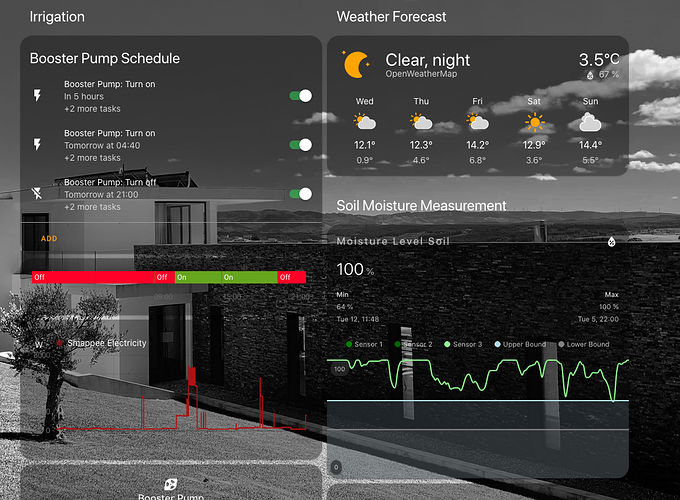 Overall I am quite happy but it’s all stacking up which raised the question if it would make sense to upgrade my platform to a HA Blue. But before I do so I have a few questions on which I am gathering some insights:
1). Would a HA Blue be better and faster then a Raspberry PI4? Would it be worth the change?
2)How do you actually move all the software from the Raspberry to the HA Blue?
3) Is 64GB enough or would it make sense to go beyond and move to 128 or even 256Gb

All in all what would be ideal or optimal platform to run HA on?

Thanks guys, really looking forward to your ideas and guides on this.

I just got my Blue today, took a couple of hours to cut everything over, but some of that time was associated to making some changes like setting a static up address which involved a number of changes on other devices. Cutting over is easy, just did a snapshot on my Pi and downloaded it to my PC, turned off my Pi and plugged in the Blue. Figured out the IP Address and did a restore (option on login screen). From there I did have a issue with the log so deleted the home assistant DB. Rebooted and it worked fine, but ended up installing MariaDB as some say it’s faster.

After everything, I have not noticed any performance differences, but my PI was running very well so it would be hard to see a real change. I already had done the boot from SSD.

I had planned to get another PI so I could put my ZWAVE and Zigbee sticks in a better location in the house. Figured, I would get the Blue as cost was very close anyway.

I am not sure going from a PI 4 with 4gb Memory and SSD to a Blue is justifiable, maybe more loading on my system and I would think differently. If you have another use for your PI or it”s a PI 3, or your still on an SD Card then go for it.

Honestly, when I ran my setup on a Pi3 my only performance complaint was the SD card. The CPU rarely exceeded 25%, and I don’t think I ever caught it exceeding 50%. I moved it to a dual core setup on an old i5 where it bumbles along in the 5% to 10% CPU load region.

Great feedback guys. So what I read is that an upgrade doesn’t give much. Only if you start (or restart) the cost of a Blue is comparable with a Raspberry.

For now I will stick to my Raspberry for a while then. I work a lot remote and I also believe that my router has a big influence on the perceived speed of the Raspberry!

I would spend the money on moving from a SD card to a SSD instead.

Sure. What would you recommend? I mean capacity, type and brand? I have absolute no experience there. And how would I do the change to SSD?

This well-written community guide should cover most of your needs.

Thank you Björn! I have read it twice and I will read a few time more.

If by “relocate” you mean that you attach an SSD to your existing Pi and then move everything from SD to SSD then the answer is no.
The process is that you create a snapshot of your old HA, install a fresh and virgin new HA on your SSD and then load that old snapshot into the new system.

Ok Thanks for that clarification. I am still struggling a bit.

I make a snapshot. That’s clear

I flash an image of HA to the SSD. I connect the SSD to my raspberry using the right adaptor and start from scratch. But where is my snapshot if I do so?

I need to save the snapshot somewhere were I later can put it back on the SSD in the right directory?

Store the snapshot on a separate location and follow these instructions : How to restore a snapshot