Hi tom_l, where did you configure this? I have tried both ‘configuration.yaml’ and ‘Raw configuration editor’ neither one works. Also how did you add the sensor for ERX? Trying to do this for my UDM Pro but not having any luck. SNMPv2 is enabled.

Please advise and thank you

Hi, I have done the same way but get quite a lot of drops, does anyone know what it is due to or if you can set so it does not show any negative values? 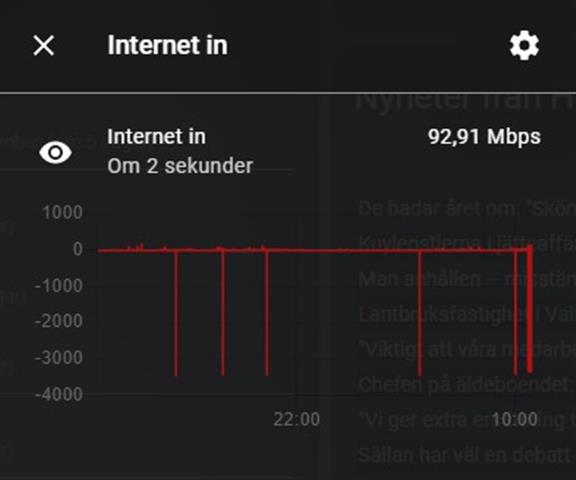 For those interested, here’s why there are big drops.

The type of OID that keeps track of the the usage is a counter. it counts bits (octets) from 0 to a very big number, and then resets back to 0 when it gets to its maximum value and starts counting all over again.

To calculate the various values from the counter (were you to do it manually), you’d take a look at the counter and write down the number. Then, you’d take another reading some amount of time later, and write it down. Subtract the first number from the second and then divide by the number of seconds between readings. That’ll get you the average speed utilized during that timeframe.

Now, imagine if you’re near the end of the counter range. You calculate a value, and then all of a sudden, you’re subtracting whatever 2^64-5 is from 27. You’re going to get a very low negative number because of the way these numbers are. The way I usually deal with that is to add 2^64-1 to the later value, and then subtract the earlier one from that sum. (2^32-1 for older gear with 32 bit counters)

That having been said, I’m not sure how to mitigate it in jinja. But it can be fixed. We’ll just have to mess around with the templates to figure out what the syntax is.

Technically true, but I doubt you’re exhausting a 64 bit counter within your lifetime, or the lifetime of any router.

32 bit counters, OTOH, are easily exhausted, as you say. I once wrote a “realtime” bandwidth monitor and had to use the 32 bit counters for some of the hardware (because the older Ubiquiti Airmax equipment doesn’t do 64 bit counters) and counter resets were definitely a problem.

Some things I’ve run across that have impacted reporting for me in the past, regardless of the counters being 32 or 64 bit:

Not everyone runs ISP-grade or corporate-grade gear at their houses like I do, and I have found that many of the cheaper residential router-gateways have issues with being underpowered or having buggy SNMP stacks.

It should be possible to add some light error checking in templates to mitigate the strange data issues.

You’re right, any of these events will reset the counter and you’ll likely get a spike in the traffic.

My point about 64 bit is still valid, as it would take approximately 4679 years to transfer 2^64 bytes of data at 1 Gigabit/second. Not likely to be exhausted in any relevant time frame even with 40-50 residential services. Not sure which speed you are looking at. Even 5000 users using 1Gbit/s at full rate would take almost a whole year to exhaust a 64 bit counter.

I had a deep dive into the NPM server, and it looks like someone didn’t enable the 64 bit counters.

So, everything I said about exhausting 64 bit counters? Ignore it.

Worked like a charm for me, but after installing the HA core update from october stopped working. Anyone else having issues?

Nope. Still working for me.

Thanks,
I’ll digg in to it later then, maybe delete sensors and restart HA and configure them again will do the trick

For anybody with Float = None errors etc… (p.s. not an expert just FYI)

Well that will return 0 when sensor.wan_in_der is unknown, like the last version of Home Assistant did.

A better option would be

So you know when there is an issue with your sensor.

Updating Templates with the new default values in 2021.10.x Configuration

I keep seeing the same question about the new default argument for the templating. This post will cover all possible ways to define default. All the methods that were changed: acos as_timestamp asin atan atan2 cos float log round sin sqrt strptime tan timestamp_custom timestamp_local timestamp_utc Each of them have the exact same default functionality but a different number of arguments. There are multiple ways to use these methods/functions, and this is where all the confusion lies. Us…

After reading the template info page I am testing your suggestion (in configuration.yaml):

does anyone know how to find OID of my UDM/UDR. The OIDs posted above do not work for me.

The UDM does not support SNMP. This has made a lot of people very mad.

I don’t know about the UDR. 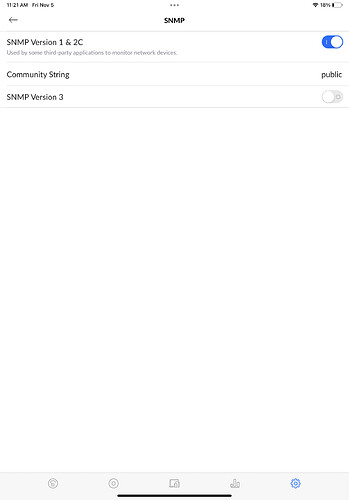 What does this SnMP do?