Was working perfectly up to today, now broken… 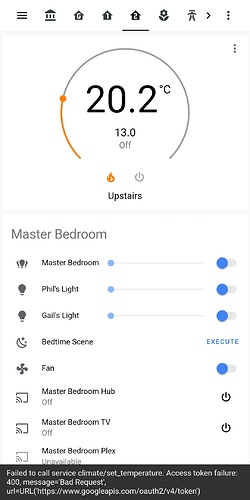 Any ideas ?, the integration is so horrifically complicated I wouldn’t know where to start…

Hi. For some reason your access token was revoked by Google. There are a couple options:

This can happen for a variety of reasons, related to your account.

FWIW I had the same thing happen to me today… Was working great then out of the blue it wouldn’t accept my token. While I did end up getting it fixed, a restart didn’t do it for me (albeit I’m not on the latest version of HA like Allen suggested above).

I started by logging into the Google APIs dashboard and generating a new token which I then copied into my configuration.yaml, but that didn’t do the trick (at least not by itself).

I removed the integration in HA, then re-added it. After that started working again for me.

I restarted and then got a notification to re-authenticate. At the end of the process I got a Server Error 500 message, however the thermostats are now working again.