I’ve recently discovered these Sonoff devices. For what they are they seem very nice and inexpensive to use for various things. I just got one in, put it inline with an extension cord, installed custom firmware, and have been testing it for a week now without issue through Home Assistant and its own GUI.

My main concern is how safe are these devices given how cheap they are and that they aren’t UL listed. Has anyone ever had one of these just burn up on them? OR had an issue with the inner components? Obviously there is a level of common sense when wiring them. Just didn’t know if there were any issues with the quality of the part itself.

We have a Scentsy in every room and usually we have them all on at the same time. It can be a bit of a chore to turn them all on then off again before bed. My goal is to link them all in Home Assistant. I’ll also be using them for seasonal lights and the Christmas tree.

I just wanted to get some thoughts or experiences on these sonoff devices before I buy a lot of them. Again, so far I haven’t had any issues with the one I’ve tested. I left it on all day and it wasn’t hot or anything. I’m just a little paranoid is all.

Hi,
In regards to safety, ingress protection is about 46 (low water protection, and moderate hazard protection). The only way your going to have one ‘burn up’ is if you exceed the amperage of 10amps. Even then you have to exceed the 10 amps by another 10 amps for it it melt. The PVC doesnt exactly catch alight but melts and destroys the board. Here is a youtube video outlining what happens hen you exceed the 10amp rating. 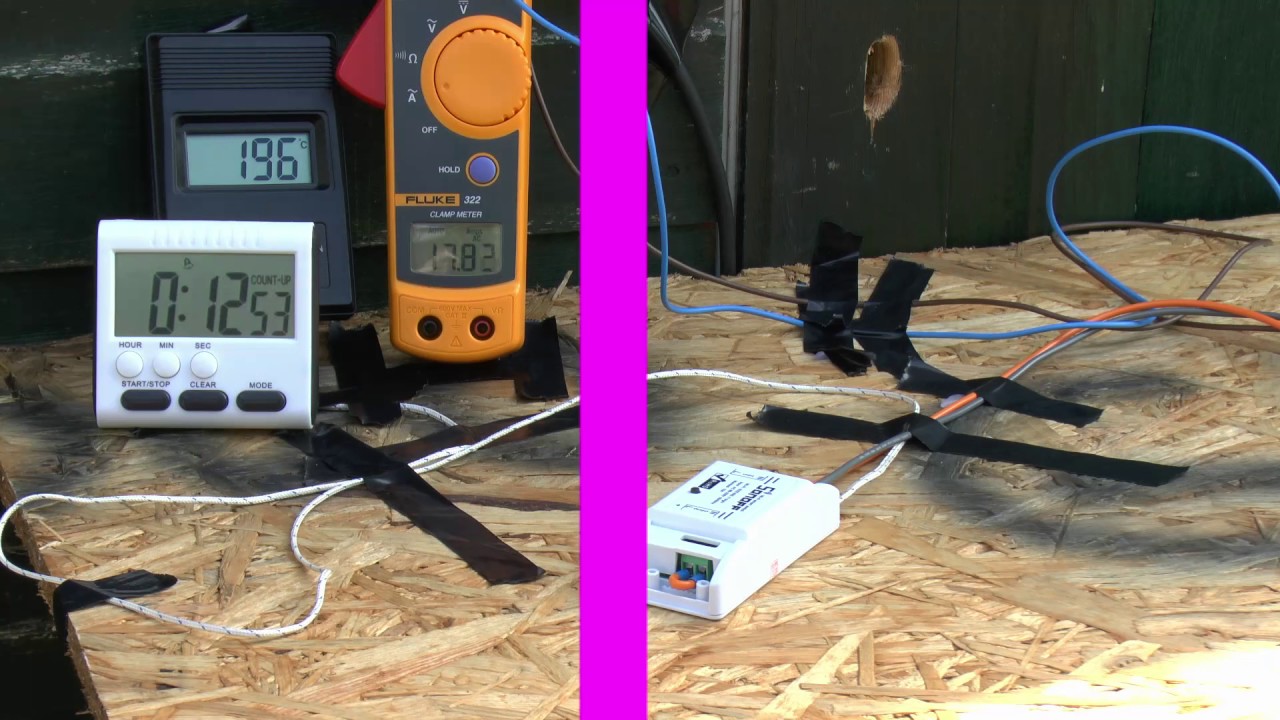 If your worried about safety, get yourself a electrical power box and some cable glands similar to this. This is a project I use to demo the switch. With the lid on it becomes sealed and water proof. I personally would never leave the sonoff switch ‘as is’ on a wall or somewhere fingers can touch it. Your relying on a small clip to hold live wires together. At least with the glands you can almost hang from it without it breaking. 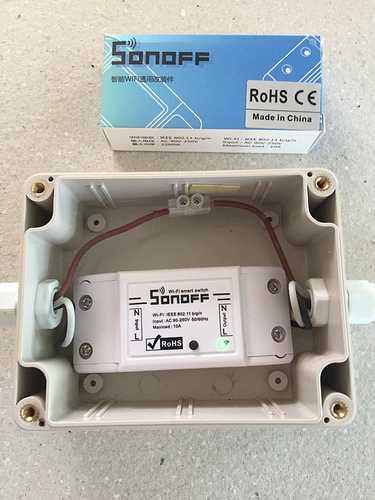 Yes,
I was using the TH10 to control a water heater and it did melt, mainly in the area around the fuse. Itead replaced it with what they claim was an updated product and I think they claim that the solder in the tracks was incorrectly specified. The current was only 8amp max!

IMHO I would not want to put high current through solder tracks and in the past I have had a fire as a result of a smouldering PCB in a non-fireproof box. The devices are great but perhaps Wifi is not, especially when enclosed in a box with other stuff. If you want high current, then drive a relay with Sonoff.

If switching high currents (>15A) or capacitive/inductive loads (like water pumps) look for a Contactor insted of a relay, as they have stronger springs and arc suppression. 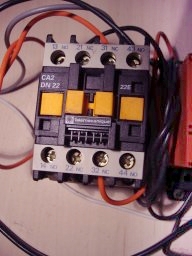 A contactor is an electrically-controlled switch used for switching an electrical power circuit. A contactor is typically controlled by a circuit which has a much lower power level than the switched circuit, such as a 24-volt coil electromagnet controlling a 230-volt motor switch. Unlike general-purpose relays, contactors are designed to be directly connected to high-current load devices. Relays tend to be of lower capacity and are usually designed for both normally closed and normally open a...

I would not recommend attempting to control large motors with an IOT solution. A 1HP motor for say a swimming pool is only around 750Watts and often they would have additional protective circuitry to detect a stall condition. Larger motors are likely to need specialist controls to properly start them and to monitor winding temperature as protection.

You might think to use a high current contactor which is activated by a clock to control the basic duty cycle of an electric heating system (Total load in tens of amps). but IOT is only sensibly used in such a system to control individual heating appliance or rooms where the load is much lower.

The Itead Sonoff is great for switching lighting but as was mentioned the terminal connections are not really protected properly to be deployed as an accessible in line switch. That is, accessible to small fingers and inquisitive minds.

The TH10 with its easily added temperature probe does do nicely to switch low current heaters with a suitable control algorithm.

Only thing I’m planning on using them for are Scentsy warmers, which are basically little light bulbs and possibly the Christmas Tree. I don’t see that overloading them.

The testing was interesting but should not be interpreted by anyone as suggesting these are safe. UL standards are established to determine safety and involve a number of tests not even intimated in the video, e.g. HiPot. Keep in mind that circuit breakers carrying 1.5x rated current may take minutes to trip so don’t expect them to provide protection. I don’t know what the overcurrent rating is for approval but it is significant. Don’t be comforted by the lack of burning, slightly different breakdown could have caused the carbon created to arc which would probably have destroyed the unit and had it burst into flames.

I am not an expert but there appears to be much wrong with these. I have some and would never use them for anything other than bench experiments. Also, consider that if you do use them and burn down your house, your insurance may not cover you since you have installed non-approved equipment.

You are perfectly right about being on the safe side. On Sonoff’s side I can say that by visual inspection (my personal opinion) they seems of an overall good quality, better than many radio-controlled plugs that can be bought in stores. For example, the main voltage paths are not only PCB copper, but also covered in solder that significantly increases the cross section.

BTW, I’m using them to control only LED lamps, the maximum load is a 3A 24V led strip.

Just a thought…but is using a Sonoff POW to only MONITOR a load safer than using the POW to switch the load? OR is it all the same if the Sonoff is in the circuit?

I’ve only used one of these for a Scentsy but have gone with UL listed in wall outlets or wall plugs for everything else. Its more expensive, but makes me feel a bit better. I’m paranoid when it comes to electricity. However my wife is buying Scentsy warmers faster than I can automate them.

I wish I had read this thread earlier. My Sonoff TH16 caught fire last night: 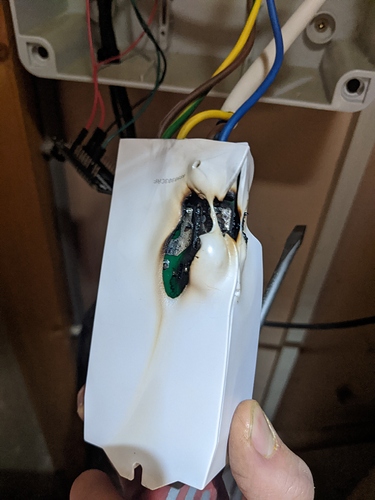 I’m looking for alternatives or a relay/contactor to use.

I would not recommend attempting to control large motors with an IOT solution. A 1HP motor for say a swimming pool is only around 750Watts and often they would have additional protective circuitry to detect a stall condition. Larger motors are likely to need specialist controls to properly start them and to monitor winding temperature as protection.

Usually this is built into the motor. Even small fractional HP motors will typically have set of starter windings that are switched out by a centrifugal switch. Some small sketchy ones won’t have thermal protection however any safe, listed motor will have at the very least a thermal fuse either wound into the stator, or could have a thermal breaker on the case, etc. Course it depends whether it is an induction motor or a brushed motor. Stalled induction motor will somewhat self current limit current as it is a big inductor. But to much higher than normal values. Stalled brush motors are more like a short based on the resistance of the windings and with the brushes in a fixed location, they heat up and can lift from the armature. And often there are built in capacitors for phase shifting.

Mostly any reasonable motor a Home Assistant user would be controlling would be self contained.

Because even a 1HP motor is a big inductive load, the relays on a Sonoff or similar device aren’t appropriate. As suggested a contactor rated for the motor load should be the business end when controlling a motor. They are often rated by HP and don’t exceed this value. The contactor contacts will be spaced a distance apart to discourage arcing when the inductive load is switched, and may even have magnetic blowouts as the rated HP increases to avoid sustained arcs.

For example, my air compressor is a 5HP motor. I use a cheap relay board to switch the coil side of a 5HP rated contactor at 240V. I think the contactor was about $45 at a local supply house. Common item. Avoid SSRs with inductive loads unless you use a snubber as the HV inductive kickback can keep the SSR from shutting off.

Woah, I hope nothing got damaged besides that thing. Do you have some more information about what happened exactly ? What kind of load did you have on it and how did you wire it up ? Do you have some photos of how the PCB looks inside after the incident ? It’s always interesting to see some forensics done when yet another one of these things bursts up in flames (which seems pretty common).

Basically that’s why CCC (cheap Chinese crap) with counterfeit components and fake certifications and 110/230V mains voltage don’t go together, regardless of how cheap or convenient these devices are. Where are you from ? The wire colour coding looks European or Australian. If ZWave is an option over Wifi, I have used mains power modules from Fibaro and Qubino and they work really well.

BTW, I see you have both mains voltage and low voltage circuits (ESP or something like this in the background) in the same wall box. Note that in most jurisdictions this is against electrical code and your insurance may not be happy about this when something happens.

Basically the traces melted/caught fire as per other users’ experiences. Luckily the box I used stifled air flow so limited damage. Just a bit of cleaning up required.

I had connected the, supposedly 15A rated, Sonoff device to a 12.5A water immersion heater (resistive) - this worked for about 3 months and suddenly, pop. I was a bit skeptical about the terminals used in the Sonoff, but as it was rated to 15A I incorrectly assumed it would be safe.

I have since wired in a contactor: 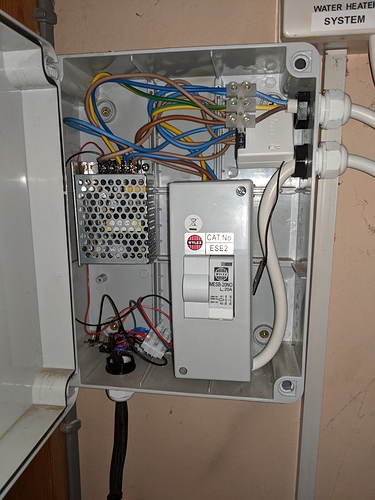 Noted on mixing DC with AC - I have ordered a book on “the regs” for the UK and can move out the DC component. The DC part is an additional ESP device to measure the water temperature to control the whole system (via a generic thermostat component).

Moving forward next time I have a qualified electrician come over I will ask them to check the DIY stuff.