I love the work that has been done to the Energy dashboard. Finaly a central and local way of getting insight to my energy consumption.
I realy like the addition of the gas utility meeter with 2021.9 Home assistant.

A small addition to the historical gas use graph would be a degree day overview. This helps to see if any improvements or adjustments to the heating system have effect.
Much like the estemated solar production that is now projected on the solar production graph.

I totally agree that this will be very useful, but I would love to have it in the Generic Thermostat were the outside temperature sensor is used as an entity source.

“degree days” or Daily temperature is the average air temperature measured every hour change during a day.

A low resolution “degree days” sensor for any location can be calculated based on the sun sensor, where the average temperature of: Sunrise, Solar noon (at the topp), Sunset and the last one at Solar lowest + the average of minimum and maximum temperatur during the 24 hour period.

The “base value” as you reffere to, can be diffrent depending on your location. We use 17°C so this shuld be a parameter into the sensor.

Then based on the Derivative of the outside “degree days” sensor compared to a “degree days” value for the room (with out any extra heat/cooling), it would be posible to estimate the “time” it will take to gain or loose 1°C of temperautre diffrence. Or how much Power defined as energy over time is required. Watts are defined as 1 Watt = 1 Joule per second (1W = 1 J/s)

Then in the Climate entity it would be possible to get Home-assistant to learn and predict the Power (Watt) needed to heat/cool the room to reach a given set temperature to a given set time.

The value the climate entity need to calculate/learn, is the heat transfer coefficient or (how “much” J/s the walls in the room is “leaking”).

K-value thermal conductivity of the room is also a good sensor value, how much heat is leaking to the cold side pr second e.g at night with out a heat source. 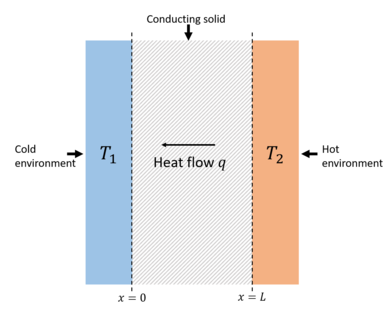 Direct sunlight on a wall, will also have a considerable effect on the temperature, but that would be an additional sensor for the equation.