An embarrassing ad from the "competition"

Had to share this ad that showed up in my news feed today for ezlo which apparently used to be Vera. When I saw the preview, I was seriously confused. They’re proud of the fact that it takes almost two seconds for a light to come on!

It’s been a while since I used a z-wave or zigbee bulb, so maybe that’s the source of the delay in their video, or maybe they’re using some weird cloud based bulbs to create an artificial problem for SmartThings, but having HA trigger a Caseta or Wemo switch are both so fast that by the time my finger is off the button the light is on. Had similar performance from Hubitat (when it worked). It doesn’t really matter what platform they’re using for the bulb because I have to assume they’re showcasing their best integration!

Just thought it was kind of amusing… 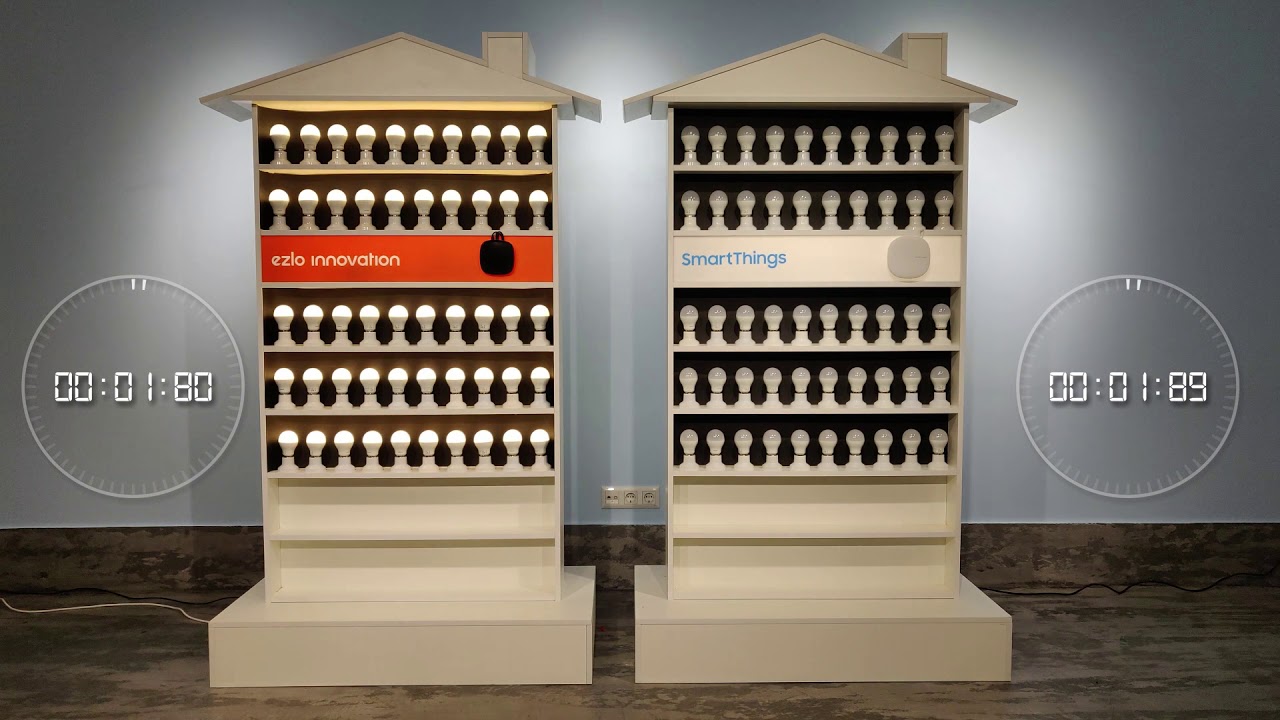 for a light to come on!

Watched the video frame by frame and as close as I can tell it was 1.7 seconds for any light to come on.

I was in node red anyway, so I did a quick test and with up to 20 entities, there is not appreciable impact on the response time of my lights.

Either way, the point is that as someone who has been using HE and HA, this add flew by on my news feed and my first thought wasn’t to calculate how many lights in the array, etc… it was “wow those lights were a lot slower than my lights, why would they put that in an ad?”

Of course, they didn’t readily publish their test environment since that’s not actually how slow SmartThings normally responds either.

IDK since I don’t use cloud IOT stuff, but maybe 50 cloud devices under 2sec is an impressive feat?

This reminds me of the drone scene about 10years ago. Folks were weaving in and out of trees with ease using cheap and simple KK boards (atmega328 and 3 gyros), and others were putting in overtime and dealing with hours of frustration trying to just get Arducopter to hover decently (atmega2560 w/ 3 gyros, 3 accels, 3 compass, barometer, etc…). It’s not that Arducopter was bad, in fact I enjoyed them for the early autonomous developments (a tinkerer’s dream), as much as I enjoyed raw thrills with just gyros. Thing is, a lot of those Arducopter guys, all they were after was just flinging it through the trees, LOL!!!

I think many HA users understand that 99% of users don’t really NEED the cloud, but it’s what is marketed and sold as best for their needs and they feel safe as such. A decent router with ovpn, and a pi with HA can be much better, but who is marketing/selling that to them? …in a way they feel safe investing, hehe. My business is in building construction, and most clients would be scared to have me setup a router/pi smarthome system for them… and rightfully so if they understand the trust required with VPN setup. Anyhow, I think a lot of folks could benefit a ton learning about self-managed vpn’s and the rest of the ‘anti-cloud’ tech out there.

Off topic question: how would one switch 50 bulbs (with zigbee) exactly at the same time with HA? Because I haven’t figured that one out yet. Either with zigbee native, deconz or via Philips hue bridge. With HE (when it worked) I could get close to the same time, but never exactly the same time. On Philips hue with the Philips hue app I even don’t get it to work.

I have grouped them in deConz, don’t see any delay between lights at all. But it all depends on the strength of your network.

Good point, never tried the deconz groups. I will tried that. Thank you.

I still have problems of understanding the concept that a command coming from a local device intended for a local device travelling through any kind of cloud. It’s totally pointless and projects like HA show that it is not even necessary to control stuff from everywhere in the world.

This is only good for two reasons: Easy setup for unexperienced users and companies that want to make use of the data you generate.

it is not even necessary to control stuff from everywhere in the world.

But that’s a moot point anyway since I can control all of my local stuff even from anywhere in the world with no cloud required except for a generic internet connection.

Thats what I said? I think you got me wrong:What I wanted to say is: You dont even need it to control stuff from anywhere. Didnt express that good in english

However for an untechy person it is nearly impossible to see the risks of opening your router to the internet and mitigating them.

Even I as an IT sepcialist don’t like to have router ports open and I am very thankful for the nabu casa service. But thats again a good example that this is also possible in a minimal way not affecting your privacy.

Oops, Sorry. I see that now.

Nevermind, I did not express myself in the best way

Two seconds is about the time it takes for my milight globes to all change states. It is caused by the need to transmit multiple packets over the air waves using 433mhz and the need to repeat the packets multiple times to be sure the globes hear the packet. Also the mqtt I use to send these are also using bloated human readable messages and not optimised for speed. It all adds up when you have lots of globes.

This is why DMX was invented for live lighting shows in concerts where you can see a few hundred globes that all need to change at the same time.

Test doesn’t mention most of the times your automation just don’t happen on SmartThings. Especially if your trigger is the sun.

I also created group in configuration.yaml file. This way I can group lights from deConz with others:

Thank you, I’ve tried that but it results in the popcorn effect.

when you try to manipulate lights.group_name all your lights explode in microwave?

I understand what he is saying. They do have a funny effect when turning on. It seems they turn on with some random brightness and then change to the desired setting.
I believe there is an open bug for that.

Yes, this is a problem since quite a while for some bulbs. I.e. the innr bulbs do it. Funny thing is they don’t do it if you use hue_activate_scene to enable them through the Hue bridge.

However I would like to stop using the hue scenes and control them all through Home Assistant.

I think I read somewhere on the forum that it is fixed but the problem persists when you mix them with original hue bulbs, but can’t find it again.

Not to highkack this thread I might open a new one with this issue.
For me it happens with hue (my only lights) and using deconz for integration.