Before I start, because I’m a new user I’m only permitted to embed one image. I have replaced some images with links, others I had to remove. See comments below.

I have a Brink Renovent HR/Medium heat recovery unit that has three different fan speeds. After a house renovation I no longer had room for the bulky wired switch that could be used to select the fan speed. The manual showed that instead of the switch (connected to a perilex wall-outlet) the unit could also be switched using three wires that are connected to the unit using a simple RJ11 connector. (See X4-3, X4-5 and X4-6). 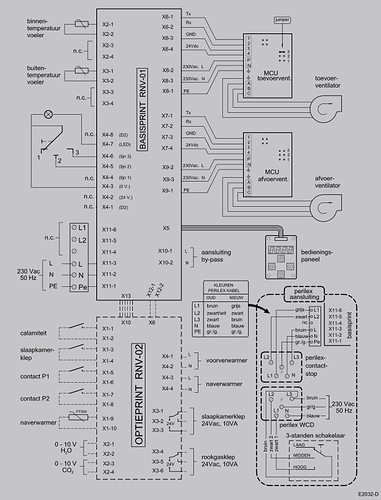 Because switching them on using the Shelly app, which works quite good, is something I tend to forget I decided to create an Automation for fan speed 2. Fan speed 2 is active from 0700 in the morning to 2300 in the evening.

For fan speed 3 I was looking for something a bit more intelligent. Fan speed 3 is useful e.g. when someone is using the shower or taking a bath. I added a Shelly Humidity and Temperature (H&T) unit with a USB power supply to my setup and spent a few days looking at the humidity readings of the bathroom. It’s very important to set the CoIoT peer as described in https://www.home-assistant.io/integrations/shelly/.

I was looking for foolproof triggers to switch fan speed 3 on and off. I decided that using the humidity value itself as input was not very useful, because humidity tends to vary a lot in a day and over the days. It’s not a very accurate indication of someone using a lot of hot water in the bathroom and it proved difficult to find a reasonable threshold value.

I ended up using the Home Assistant Derivative platform, because it always signals an increase when the bathroom is used.

I’ll try to add a picture of how the Shellys are wired. I used their own packing material and a sealable container to protect them from dust. They do not seem to be getting very hot, even when in a closed container. 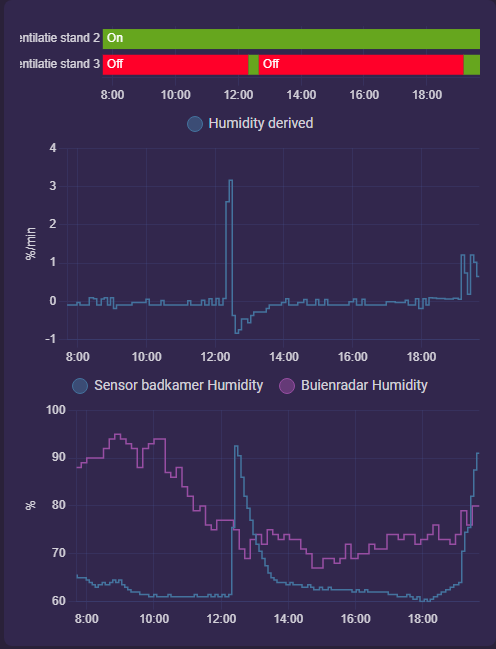 Great write up! The trick with the derivative is very interesting. I want to build something like this also, once I take some time to figure out the controls of my fan

Interesting post I was considering Shelly devices for the same purpose but I also have a control panel WTW on the eBus connection which would create synchronisation problems . Pity the Shelly uni can’t connect directly to the eBus interface so you would end up with both command and monitoring options.