just got a new broadlink rm4 pro.
first thing i did was to let it find the right configuration for my AC unit - which it did successfully!

I didnt need to teach it anything, it offered me a configuration based on my ac manufacture, and a min l8r i could control the ac from my phone. so far - great.

adding it to HA was just as simple with the broadlink integration. or so i thought…
so…

how do i extract the different commands that the “app” on my phone already news, to use in HA?

i thought it will be as easy as with the logitech “harmoney” hub, but so far i couldnt figure out what the best way (or anyways for that matter…) to do it for myself

i’d love some help with this

Here is what I use with similar case. 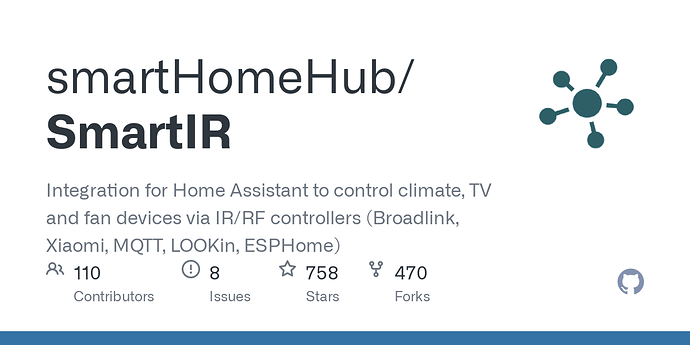 thanks for the pointer

i take it there is no “easy way” of maybe creating scripts with specific commands?

is adding the “smart ir” component is the best way to go about this?

Sadly, also to my disappointment, there is no Broadlink integration yet, which just takes over everything from your app. I wish, it would happen soon, but that’s not in line of sight.
You will have to DIY…

so…
by now i have already figured this out. with @taikapanu aikapanu pointer, and a video from Hive Mind Automation 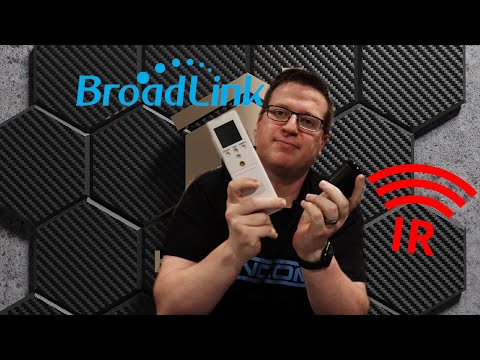 wasn’t that bad, just took a little time to find the right codes for my AC.

SmartIR is brilliant. I’ve been using it for years. It will let you create a Climate entity for your AC unit and have all the required functions. It really is easy. There is no need to create scripts or anything. The hardest part will be accessing the codes if that model of AC isn’t already in the database.

I fully agree with @sparkydave.

Using 5 Broadlink RM4 minis for 5 split AC’s here, put them inside the cover of the indoor units and control them through SmartIR. As for Lovelace I am using nervetattoo / simple-thermostat.

The setup is not that hard and it is working reliably without hiccups. Basically just set and forget. 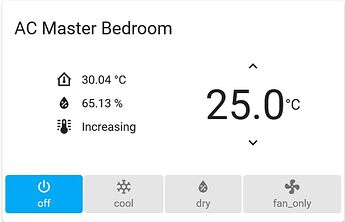 That card looks cool! Have to give it a run as well!

i have a follow-up question about the “power_sensor” part.

my ac unit is monitored by a power sensor, that reports power consumption on its own, i just dont understand where it shows in the thermostat card.

It doesn’t ‘show’ it in the card as such. The idea is that you use the power value to create a binary_sensor which is either on/off based on the status of the A/C unit. That binary_sensor then reports the A/C on/off state in the card by showing the unit as on/off (or changing the icon colour).

here is an example from one of my devices:

ohhhhh… now i understand the “on-off” reference for the “power_sensor” on the smartir web page.

so if i understand correctly:

the first part is to make a “true/false”, “yes/no” sensor that is based on “power consumption” from another sensor, with a “templates”.
in your case - if power consumption is under 20, the “new” sensor will repot as “false”, and if your “gas heater plug power” consumption is over 20, it will report as “true”.

after “planting” that new sensor in the “climate” integration, the climate card will also report “on/off” based on the new sensor.

the first part is to make a “true/false”, “yes/no” sensor that is based on “power consumption” from another sensor, with a “templates”.
in your case - if power consumption is under 20, the “new” sensor will repot as “false”, and if your “gas heater plug power” consumption is over 20, it will report as “true”.

after “planting” that new sensor in the “climate” integration, the climate card will also report “on/off” based on the new sensor.

i have 2 more folow-up Q based on that, since i can imaging you have encountered them by yourself already :

Instructions on how to use the templating feature of Home Assistant.

what “better” animations or color deferrization can i force on the climate card to make a better visualization on its “on/off” state (and how do i enforce them)?

You could probably use this:

This is not a custom card. Instead it’s a plugin which changes the way all other cards work How about this? type: entities style: | ha-card { color: red; } entities: - light.bed_light - light.ceiling_lights - light.kitchen_lights [51] Not a custom: in sight. Or this? [mov] (Please click this gif to open it. It seems to be prone to artifacting when compressed) Or how about changing what happens when you click the name or icon in an entities-card? FANTASTIC POST BY ILDAR…

i made a sensor like you suggested, that report back “true\false”, and put it as the power_sensor, in the configuration.
however, although the sensor its reporting “true”, the climate card reports the AC unit as “off”
(after using the AC remote unit, and not HA, for turning it on)

how to i use the template you showed (or other) to get the sensor to report “on/off” instead of “true/false” ?
(i could create an automation for that “true/false” sensor to toggle an input boolean switch on/off, and use that, but i rather think there is a “better” way…)
isn’t there…?!
any thought?

P.s
my programing skills are poor, but i think i figured it out. i will leave it here for anyone else that might need it, and for you all to correct my mistakes:

this will bring back “ON” result when the measuring units that THE.NAME.OF.THE.SENSOR are monitoring will be above 30, and “off” when they r under.