Call Servive light.turn_on, not allways turn on all lights

Hi, I have this automation to turn off the cocina (kitchen) in my home.
All lights are philips through conbee II (no hub)
Sometimes (50%), when i press the button, it wont turn off all 6 lights, and not always is the same light that does not turn off. If I press the button for a second time, the remaining lights will finally turn off.
Is this a “normal” behaviour?
Same thing happens with all other automations with lights and areas.

The cocina area have 6 lights, the hue switch and a wifi router 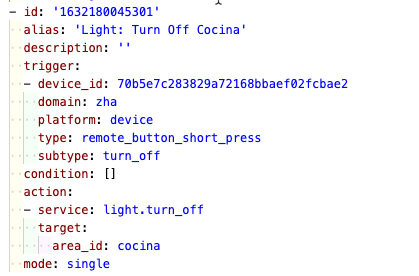 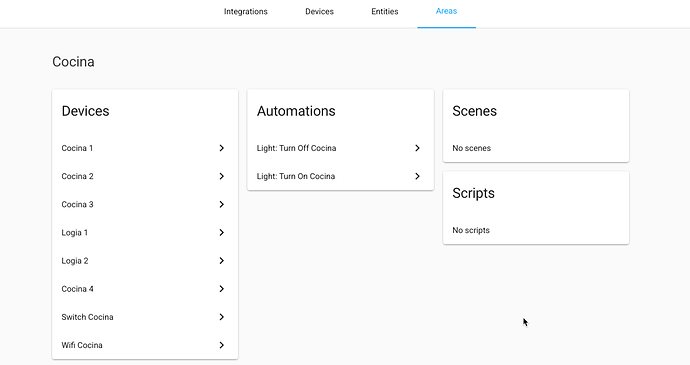 Why did you categorize this topic with zwave when you are using Zigbee to control Philips Hue lights via conbee II?

Sometimes (50%), when i press the button, it wont turn off all 6 lights, and not always is the same light that does not turn off.

The Cocina area contains multiple lights. When you use light.turn_off with the Cocina area, Home Assistant sends multiple off commands, one for each of the lights. It would appear that the burst of Zigbee traffic sometimes fails to be heard by one or more lights.

Is this a “normal” behaviour?

More or less. You need to define a light group in Deconz, and switch that off. That way, Zigbee only sends one command instead of six.

Great! Understood… Just didit and works fine so far!!
Thx for the help!

FWIW, wherever possible, using native groups is more efficient (sometimes called a ‘hardware group’ as opposed to the ‘software group’ used in Home Assistant). To my knowledge, zwave, Zigbee, UPB, and Insteon all support the concept of native groups (but they may use different terminology). A native group may contain 20 devices but only one command is needed to control all of them. In addition, they all receive the command at the same time.

For example, imagine a single, candelabra-style, light fixture containing 8 bulbs. The most efficient way to control all 8 bulbs is to include them in a native group. Turning them on/off, or dimming them, is handled by a single command as opposed to 8 separate commands. They receive the command simultaneously and so react in unison (as opposed to some turning on/off, or dimming, sooner than others).

Perfect!!! Re-aranging everything into zha groups!!!