I bought a few WiFi light bulbs Yeelight, Tapo & Sengled.
Yeelight connected effortlessly to home assistant, but home assistant doesn’t support the others. I connected them to Alexa instead.

So my question is, If I integrate Alexa into home assistant, will those light become available? And if so, what are the disadvantages of connecting them through Alexa. Because ideally you want everything connected to HA directly.

Can you also explain local control vs cloud based. For exmaple, the yeelight bulbs are first set up in yeelight app. Then they are discovered in HA. So are they cloud based or local? I don’t really understand the basic concept. So it would be great if you can enlighten me on this.

Hi, I have not used the lights you have listed but you can find a list of the various local/cloud connection types here: 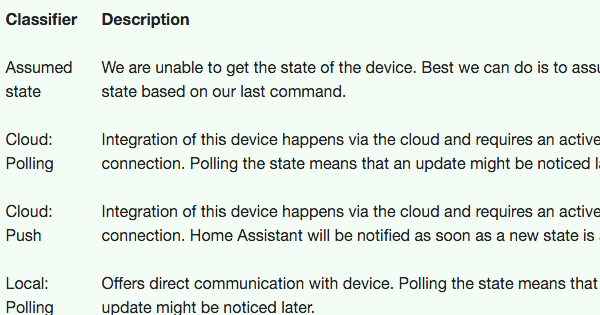 Classifying the Internet of Things

Open source home automation that puts local control and privacy first. Powered by a worldwide community of tinkerers and DIY enthusiasts. Perfect to run on a Raspberry Pi or a local server.

If you look on the devices HA Integration page then it defines the type as shown below: 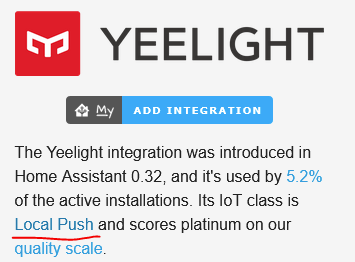 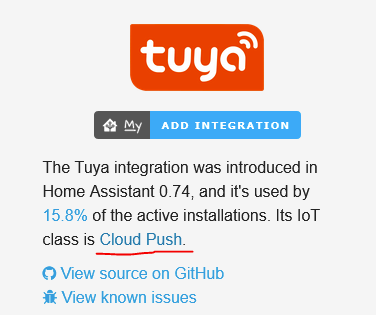 Alexa integration works directly with HA via the HA skill that you have to add, this means that Alexa will work regardless of whether the device integration is local or cloud.

The confusing part is that the device may have its own skill to enable Alexa to work directly with the devices cloud service. You don’t need this if you have the HA skill installed in your Alexa account - this one skill effectively replaces the need for all the various device skills.

Thanks Jonah for clarifying the local and cloud.
So for Yeelight, fi I delete the app. The lights will to work with home assistant? Since they’re local?

Regarding the alexa integration with home assistant: The devices connected to alexa can show up in HA and fucntion just llke normal? So essentially they are connected to 2 services. HA & Alexa. If I turn off the light using home assistant, the lights state on alexa will also change to off…

Hi, like I said I have not used Yeelight but I think you should be able to delete the Yeelight App from your phone and control via HA will still work.

With Alexa integration things are a lot easier if you are using Home Assistant Cloud with a Nabu Casa account.

In the settings you can select whether relevant states are reported back to Alexa:

This lets you ask Alexa things like “What is the lounge temperature” and I think states can also be used in Alexa routines although I have not tried this.

In “Manage Entities” it is best to just selected the entities that you need to be controllable by Alexa as including everything can be a bit overwhelming.

You can certainly control everything from multiple places e.g. switch a light on from your HA dashboard or the companion App then tell Alexa to turn if off. Scenes are a good thing to include as these allow many devices to be controlled with one command e.g. “Alexa, turn on Movie”.

Oo its so much clearer now!
I’ll give that a go.

Another question which i always have is about the internet going down and devices not working.
If i have totally local control on home assistant and the internet form ISP drops. But the wifi router is on. Will home assistant work or not work. (ignore the zigbee since theyre totally different) but will the locally connected wifi devices work?

I think there are a couple f things that need clarifying…

Generally, devices that are paired to Alexa won’t show up in HA and can’t be controlled from HA.

Devices that are paired to HA will show up in Alexa and can be controlled by Alexa via the Nabu Casa connection or alternatively by using a free custom skill (Haaska).

I don’t think asking Alexa the state of some device in HA will work using the built-in integrations. That will require sone some custom HA integrations/Alexa routines be set up.

But I guess TBH, I’ve never tried since using the custom Alexa Media Player integration which I use for all my Alexa announcements. So I could be wrong about this.

I can’t give you any help on wifi bulbs since I don’t use any. So I don’t know why the Sengled bulb won’t work.

Will home assistant work or not work.

HA itself is totally local. It will continue to run without even a connection to your router.

If you have any devices that are not wifi/ethernet based (zwave, zigbee) then those devices will still be able to be controlled by HA via the automation system.

You won’t be able to control things manually tho since in order to get to the dashboard you need a browser that can connect to the IP:port of your HA machine. If not router, no IP.

As you start using more devices/services that require the cloud then the functionality of HA becomes more and more impaired.

Thanks for your reply.
A couple of follow up questions.

What about I use my mobile data to connect to home assistant. So if the the Internet is down for the HA. I can still access it from my phone.
Csn it be controlled manually? To turn on and off WiFi lights?

I guess to put it simply. What I mean is, if the Internet is down and the router is still working and transmitting WiFi signal, will the devices still be connected to the WiFi and function properly? Or do I need the Internet connection for all this to work,doesn’t matter if WiFi is still on.

Secondly,I havent yet integrated alexa to HA. Any advice on that. I’m looking to go down the route of Nabu casa since I’m a beginner. But what about controlling my devices connected to alexa. Does the integration work both ways? Ha to alexa and alexa to Ha

if the Internet is down and the router is still working and transmitting WiFi signal, will the devices still be connected to the WiFi and function properly?

as long as all of those devices are locally controlled (no cloud push, etc) then yes.

Does the integration work both ways?

No. It only works one way - from Alexa to HA.

it’s a bit confusing I know. I tried explaining above but I apparently failed

If a device is paired to Alexa and not HA then HA will not know of the existence of the device. It can only be controlled via Alexa and not via HA. It won’t even show up in HA at all.

If a device is paired with HA and not Alexa then the device can only be controlled via HA and not Alexa unless you use Nabu Casa ($ but easy) or Haaska (free but harder). It won’t show up at all in Alexa (unless using those access integrations).

Once you use the HA Cloud integration then everything will show up in Alexa unless you tell it not to. I personally have most domains excluded and only use switches, lights, covers, fans, climate & scenes (I think that’s all…) and if I decide I do need another individual entity (mostly input booleans) I will include that back in per entity.

Ahh okie okie, I understand now!
Now that I know how the integrations work.

Whats cloud push and poll & local push poll. In laymans terms pleaseee
And also is there any? any? way devices can be connected from alexa to ha? or is it just impossible

“push” means that the the service actively sends data to HA without request.

“poll” means that no data is sent to HA unless HA asks for it.

“local” and “cloud” should be self explanatory (cloud needs internet access, local doesn’t).

any? way devices can be connected from alexa to ha?

Not that I know of.

I won’t say it’s impossible but I’ve never heard of it being done.

I set up nabu casa and it works nicely on the laptop and mobile browser using the url. But i can’t get it to work remotely on home assistant app.

By this I’m assuming that you mean the mobile app for Android/IOS?

There are two entries in the initial onboarding for the mobile apps - one for your internal/local IP and one for external/remote website. use the Nabu Casa website address for the remote entry.

If you have that set correctly then have you enabled “Remote Control” in the Home Assistant Cloud section of the settings page?

Can you point me in the direction of that please. I don’t see any entities of internal and external on nabu casa website.

Never mind I’m an idiot! I didn’t have the “s” in https

Glad you figured it out! We’ve all been idiots at some point.

haha happens to me more often :’)

do you know if the external url should remain a secret?

Yes, I would keep it a secret.

If anyone had access to it they would still need to know your HA username and password but there’s no reason to get them over the first hurdle.