Not too happy about any of the weather forecast integrations currently available in homeassistant. None of them uses the weatherstations that are nearest to me so their predictions are often a couple of hours/degrees off. Even the german one (I’m from there) only has weatherstations for a handful of cities and that’s it. I wish homeassistant would use data from wetter.com. They got a whole lot of stations. I see some code for it on github. Perhaps the devs can implement it?

(I’ve seen expensive ($$$) home weather stations from Neatmo. I suppose they can predict weather but I wouldn’t use one of these.)

I think wetter.com doesn’t has an api for now.
I googled for this and only found one of their pages saying its not available right now.

Also the code from your link is nearly 7 years old.

I use Darksky for now and the prediction for my location is nearly the same as on wetter.com.

I have created an integration for here_weather because of this. When it gets merged you could give it a try. I had good results for my location in Germany. https://github.com/home-assistant/core/pull/28910

DarkSky got acquired by Apple. Existing users can use their account until the end of 2021 but you can’t register as a new user

@eifinger That’s cool but what do I even enter into “<app_code>”?
In the “get your credentials”-page of here_weather there’s a bunch of options.
I tried getting credentials for “Javascript”, it gives you an APP ID which you’re supposed to enter into the configuration as well as an API key which I put into <app_code>
That one didn’t work, the same didn’t work with “Rest”. Rest also had an option to creat an OAuth 2.0 JSON web token which I tried to replace <app_code> with as well, still no success.
The other options are for android or iOS so I suppose I shouldn’t use them.
How do I have to do it?
___________
btw I checked if I formatted it correctly. I’m getting a sensor.here_weather integration not found error and not a formatting error

edit: You said “when it gets merged” which seems to mean that I can’t use it yet (somehow just read over it and didn’t think about what it means.) I thought I could just use it because there was already a config.yaml example on the github page but now I’m seeing a homeassistant reviewer said your code needs some changes before it can be integrated into an official build of homeassistant.

I just found this: https://brightsky.dev/

Regarding brightsky, it uses the DWD (Deutscher Wetter Dienst) data which is already integrated into homeassistant but that one only had ~16 (if I recall correctly) of weather stations so it’s only accurate for certain large cities and not local enough like wetter.com’s who have a station in our neighbour city.

I’ve seen that you can actually request a forecast of your city on the weather_here website (XxXx)
from my observation of the last few days the weather.here sensor isn’t all that accurate for the small village I live in (Bassenheim near Koblenz in Rheinland-Pfalz)
For example it says that it’s 27° right now while it’s actually 29,5-30°(measured with my local sensor). (I put the local sensor 1,5m above ground, not into a spot directly hit by sunlight but at a place close to it)
As usual relatively close forecast is provided by wetter.com with 29°.

28.2° met.no/yr
openweathermap (owm) is the most inaccurate with 26,7° and a forecast only every 3 hours. (I think I’ve seen met.no being less accurate than owm before as well though)
buienradar 27,5°

Thinking about buying my own weatherstation. Feels like such a waste though. I mean if just 1 person within a couple of miles near you had a station and provided his data online you wouldn’t need loads of people spending 100+€ on it and wasting earths’ resources.

Give Weatherbit.io a try:

Introduction As many people are aware of, DarSky was bought by Apple, and they immediatly discontinued the option for new users to get an API Key and also announced that the service for existing users will stop working by the end of 2021. I, as many others, started to look for alternatives to get weather data in to Home Assistant, and there are allready a lot of great Weather components available for Home Assistant. Never the less, I decided to see what else was out there, that had a Global pre…

You just need to install the integration manual from https://github.com/briis/weatherbit or you use HACS.

Then you need to register at weatherbit.io for a free plan to get a API-Key.

Compare Cologne now - upper one the the standard met.no, the lower one is very close: 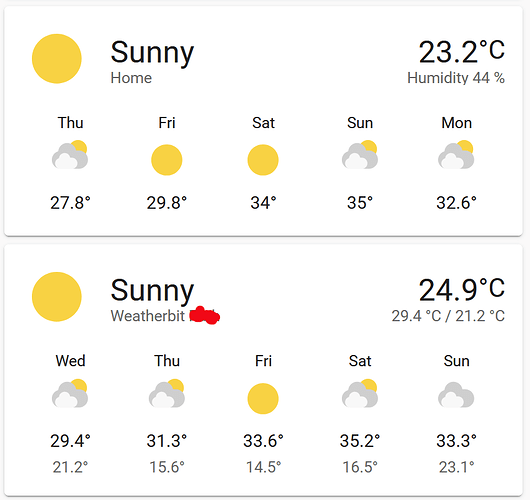