I won’t give a detailed description for how to replicate this, because it’s not a ‘one size fits all’ field and I think a lot of simplifications can be made with a stronger stepper motor than I used (I used the cheapest 5 USD version from Amazon).

But here is the finished product: 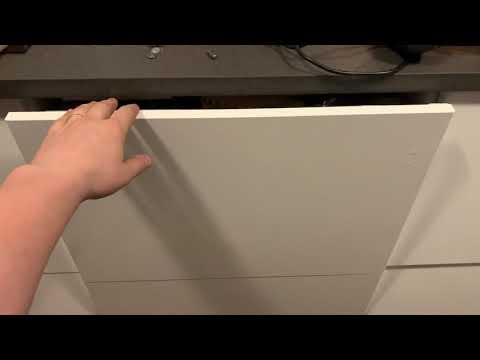 Here is what I did in short:

(a) Stepper motor and a driver.

ESPhome’s stepper component supports drivers of type A4988 or ULN2003.

In essence, what you get is a stepper motor with a cable to a driver, and the driver have 3 or 4 outs for cables to GIPOs.

You also will need a 9v or 12v power source. I often just take some old cable I have laying around at home and connect it. This time I took the cable from a massage pillow the Mrs hadn’t used in a while. Please note that if you just have moved, you got a golden window for a few months to get your hands on great voltage reducing cables since you can always blame the missing cables on ‘stuff getting lost in the move’! So if you just have moved, don’t snooze these projects too long. Like ‘Stig Stig have you seen the cable to my massage pillow? Nope, must have been lost in the move.’ Works perfectly.

(c) The stepper motor and the dish washer
So opening a dishwasher requires quit much force.

Since the stepper motor I used was so weak, I had to complicate things a bit. It was obvious that I could never open the dish washer with the motor plus gears alone.

But I created gears first. One small on the motor + one big gear next to it is the way to go. It’s quite simple, if you take something moving at a certain speed with a certain torque, you will get higher torque if you decrease the speed which you do with a small gear driving a bigger gear.

On the bigger gear, I put a over layer that is oval. If the bigger gear is close to the door of the dishwasher, it will push it open when turning a full circle.

I only used parts I had laying around at home for this one, and since I don’t have a 3D printer, I built the gears in wood with a template I created at:
https://woodgears.ca/

(d) Calibrating the force needed to open the dishwasher, so that it can be open even by a really weak stepper motor

So since my stepper is really weak I needed to ensure that the hatch could be opened with a weak push. There are two ways to do this. (1) Either you find something that with great precision leans on the hatch, so that the stepper can do the rest. Or (2) you take something that is too strong for the hatch and balance it out.

I had to go with 2. I took an air spring (or whatever it’s called in English) that all station wagons and suvs have to help open the trunk. They are real cheap, like 10-15 bucks. This air spring will surely be too strong for the hatch on the dishwasher and push it open by itself. Mine was at least by quite a wide margin. So I cleared the refrigerator from magnets and integrated them into a list that I put over the dishwasher while just attaching metal to the inside of the hatch. I added one magnet at the time. 5 did the trick.

Here is the finished product before it was placed and hooked up to the electrics: 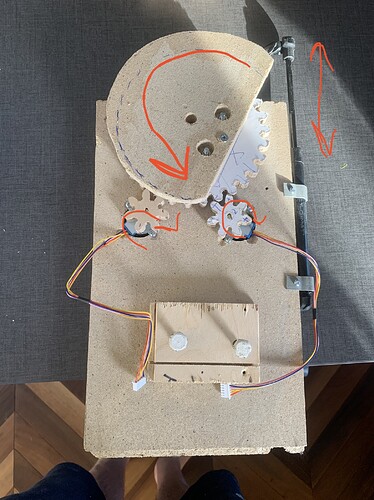 Some thoughts on improvements
-Any tips on stronger stepper motors than I used would be appreciated! I won’t use those weak ones again.

-I am not sure that my Tuya plug is built for a dishwasher (it surely isn’t)… It works, but it could be broken by the quit heavy (inductive) load of a dishwasher.

-Instead of using the gear with an overlay approach it might be possible to use — what i think is called in english — “ball screw” (be careful when you Google for different type of screws in English because some very strange pictures can show up). I.e to get a straight line push in and out.

-I am not sure that my Tuya plug is built for a dishwasher (it surely isn’t)… It works, but it could be broken by the quit heavy (inductive) load of a dishwasher.

I’ve had 6x smart plugs fail, two were on fridges and one on a dishwasher. The dishwasher was annoying but the fridges were a disaster…no one home to restore power before food went bad.

Yeah, I can imagine.

I have an Ikea water leak sensor to spare, might put that in the drainage and have the hatch open a certain period after the sensor goes off. But many potential error sources, especially in the beginning.

Now I know what to do, photoresistors are very easy to work with. Can just place one against the light from the dishwasher. I got one on my energy meter that only records light when it faces a lamp directly, nothing from indirect day light. Should work like a charm.

I’m not saying that the plug method is bad, just that the device I used failed. Your one might be a better quality unit and be completely fine. I have a different branded unit doing the same function on my washing machine and that’s been great. The difference for me is access to the plug, the dishwasher was a pain to sort out because it meant pulling the dishwasher out to remove the failed plug

Has the unit you are using now on your dishwasher been up and running for a long time now?

I am not an expert on this, but just a warning to others, a dishwasher really test the “specs” of a plug because it both have high watts functions when the heating elements warms stuff, and the high inductive power loads when the fairly large motor get to work.

But I am wired like you Dave, why not test it and see how long it works?

Has the unit you are using now on your dishwasher been up and running for a long time now?

I’d say at least a year.

But I am wired like you Dave, why not test it and see how long it works?

As I mentioned, I had 6 of that particular plug brand fail (and others on here have had a lot of failures too) so it’s likely just that brand/model that was bad. One of mine that failed only had a 15W halogen filament lamp connected to it!

Yeah I will see how long it lasts, but if it breaks down I am sure a Photoresistor will do the trick.

If the smart plugs are failing due to the relay, just link out the relay. You can use the energy monitor function without risk of cutting power to a fridge/freezer.

Thanks Niloc, do you just connect past the relay with a cable?

Basically, yes. You have to bypass at the relay as bypassing anywhere else will render the current sensing inoperative. I cannot stress enough - if you are at all unsure, let someone with electronics knowledge do it.

Gotcha, should be doable even with my limited knowledge, got a pal I always call if I get uncertain about something electric.