This may be a cultural thing, but before the appearance of voice recognition devices like siri and alexa at least in german speaking countries home automation was very often visualized as a kind of interactive “floor plan” of the house, with devices laid out on a birds eye view. And this was often considered the holy grail of smart home representation. 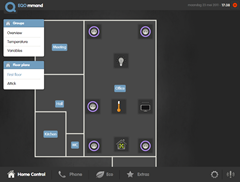 Now I do realize that this kind of display does not degrade well on a small phone screen, and that implementig it well is very very hard. And the value of this kind of UI is probably not as high in practice as its proponents claim. But it would be a cool feature to have, nevertheless, especially for giving a “at one glance” view on PCs, TV screens or large tablets.

I have not seen that you can define the order of cards / widgets appearing on a page - happy to be corrected if I am wrong.

Lovelace picture-elements card for this