I’d like to display only my floor plan tab from Lovelace in Fully Kiosk browser.

At the moment I have both the side panel and the top bar of my Lovelace UI visible and I’d like them both to be gone when I use the URL of the Floorplan page.

I read through other topics and a common suggestion I saw was “hide_app_toolbar:”, but when I use it in my lovelace_ui.yaml it autocompletes as “hide_app_toolbar: null” after first saving it and hides nothing. Also, what exactly should it hide? The top bar or the side panel or both?

Thanks in advance for any help!

For me, I just created a special user for my kiosk apps and configured the “Always hide the sidebar” for that user to get rid of the left sidebar.

I couldn’t find an easy way to remove the top header, so I just commented out the header section in the ha-floorplan.html file.

That sounds excellent, I hadn’t realized the left sidebar is configurable like that!

What header section do you mean, though? I don’t have a ha-floorplan.html file, my floor plan is in the form of a picture-elements card with “panel: true” in the Lovelace UI config.

Hmm, that seems a bit overkill, given that I don’t want to customize the bar at all, just hide the whole thing…I have HACS installed, but no custom components currently.

Well I don’t know about overkill, but at least CCH can hide the bar and header if you want.
See: https://maykar.github.io/compact-custom-header/Main-Config-Options/

Cool, thanks! I’ll install it tonight. It looks like it has per-user settings, which is great, since I have a separate user for displaying the tablet UI. 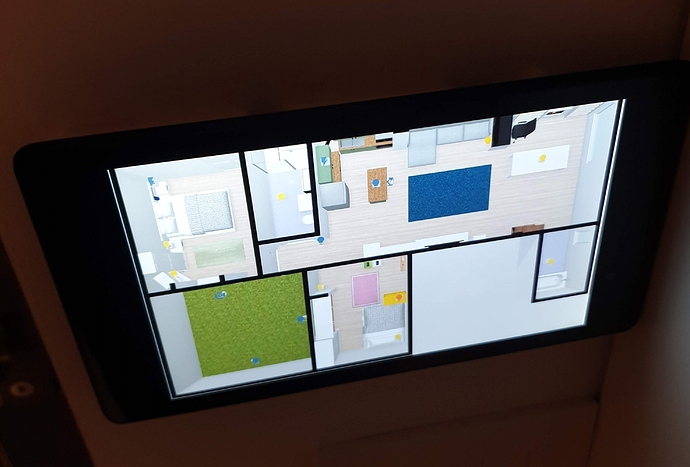 I’d like a clock screensaver to show up when the tablet is not being used.

I tried Daydream, but it works very poorly because there is no option to use it when the tablet is not charging.

Does anyone have alternatives for a clock that works with such a setup?

Leaving this here just in case anyone else is interested:

What I wanted to to was to have a tablet on the wall, without drilling into walls or having unsightly cables visible.

Thus, I chose the Nexus 7 2013, as far as I know the only tablet ever made with wireless charging (and which can also be found for very little money nowadays and doesn’t have the OS compromises that buying an Amazon Fire tablet involves).

I used double-backed tape to stick a Samsung wireless charging pad to the wall (the S5 generation one, which is quite slim) and some 3M thingies I found at the supermarket that have a kind of velcro on one side and glue on the other. I had to use 2 layers of those in order to compensate for the wireless charger’s thickness. This also means that I can, at least in theory, remove it and put it back as needed, though I don’t really want to mess with the glue strength and have it drop from the wall at some point.

I also chose to place it next to a BluRay rack, which made hiding the cable coming from the wireless charger very easy.

This particular wireless charger seems to not like never moving the item being charged off it, because it goes into a mode after reaching 100% which stops charging completely and which I can only reset by unplugging/replugging. Thus, I added a smart plug and configured an automation which turns off the plug at 23:00 and turns it back on at 07:00, each day. This enables the tablet to be charged when needed and does the reset mentioned above.

By doing this, though, I came across the problem of the screensaver: Daydream doesn’t work when not charging and my online searching only found a horribly hacky solution with Tasker, which I’d rather not add to the mix.

I tried leaving the screen off and activating motion recognition via the camera, but that doesn’t work all the time (and gets triggered when lighting changes), so it seemed like one of those bad ideas when using a smart home, i.e. it’s either 100% or it sucks!

Thus, I downloaded a few 1920x1200 wallpapers, added them to Fully Kiosk browser’s photo screensaver option, lowered the brightness of the screensaver to 0 and achieved a solution in which when not in use (both while charging or not charging), the tablet displays some nice, low-brightness pictures and you just have to tap the screen to get to the apartment map.