HA Supervised vs HA Container - what are main differences?

What are the main difference between the following two install options? I will be running HA on Debian 11 with Docker. (From the research made HAOS is ruled out since I need direct access to the Linux OS for other stuff I need to do on my NUC)

But you will want container, because if you run any docker container next to supervised, your installation will be unsupported.

With the remark that the red X on add-ons is resolved by having them as docker containers, most of them (those that are important) are readily available on docker too. Added to docker…as you alread mentioned yourselves…you can install stuff which HA cannot do as add-on, eg. deepstack and add your home-grown HA add-ons as containers. If you already know docker then I guess you are good to go and you could also migrate to something else in the future so not really a bad choice (just work to migrate)

thanks! i have been to that page multiple times but i never scrolled down enough!
but i did not understand your 2nd comment … did you mean that if I add another container next to supervised my HA will be tagged as unsupported?

yeah … i have an idea about containerization, I can always give it a try I guess

did you mean that if I add another container next to supervised my HA will be tagged as unsupported?

HA works, you just get this: 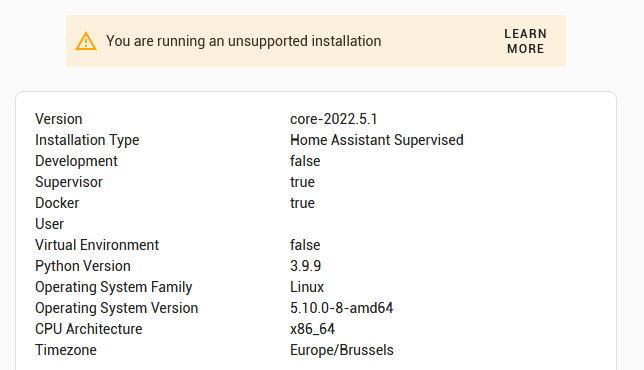 (it is not my production HA)

Just donot install a supervised version, the regular docker one and add stuff as containers if/where needed, there is not too much needed (!) though…but just to give you an impression what I have:

If you can figure out Docker then just go with that and avoid Supervised.

I have yet to be limited by anything that I absolutely needed Supervised to run that I couldn’t get to run in a stand-alone Docker container.

Yes, I have 4 instances of HA installed (2 always running including a Supervised version) that I use for testing.

Some of those other containers aren’t running as well but I can start them as needed.

And that’s the beauty of Docker. You can install some app, test it, turn it off or remove the container and the system never even knows the difference.

I just did that yesterday in testing PiHole vs. Adguard Home (on a different system). I installed both but since they use the same ports I couldn’t have both running simultaneously. So I could easily switch back and forth between them as easily as stopping one container and starting the other.

yeah there are some advantages using docker. my main concern is that i already hage HA running in Supervised and would need to migrate. i don’t know if that will give me problems to migrate onto unsupervised docker. thanks for the info

It shouldn’t. the HA migration will be fairly easy.

You will just need to figure out what you need to do to add all of your add-ons manually. Usually it’s just a matter of going to the docker hub repo for each app and modifying the exam ple docker run command found there.

I run the container install as well and use zwave. Zwavejs2mqtt runs well in docker, and can communicate with Home Assistant by either mqtt or web socket server to the zwavejs integration.

There’s some other info to set it up in the home assistant docs under advanced installation instructions.

Instructions on how to integrate Z-Wave with Home Assistant via Z-Wave JS.

thanks … the problem is that I am still on the old Z-Wave integration, and need to migrate Z-Wave JS. Currently I really do not have time to re-configure ZWave devices, I think my option is to migrate to the new hardware like with like, then migrate to ZWave JS with some luck, and maybe in the near future will re-install everything using docker containers.

Being on openzwave still will definitely complicate your move.

You might just be better off ripping the bandaid off and go straight from openzwave to the docker version of zwavejs2mqtt.

thanks tim … for the time being will migrate to new hardware using the exact same setup I have, then migrate to JS, if all goes fine will take a backup and will take it from there