After flashing the NUC image to my new 2TB SSD I get this error when trying to boot: 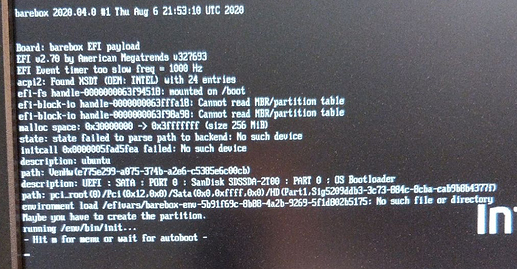 After the error is displayed, I only get a black screen. If you then press and hold “Enter” you will see the following (slow motion):

Anyone an idea, why this happens?

On a different 256GB SSD everything works well. Seems so have something to do with the 2TB SSD.

My bad “solution”: install Debian 10 on the Nuc and installed HA Supervised

I’m using a SanDisk SSD Plus 2 TB inside a BOXNUC7CJYH2. It’s a SATA SSD, so it seems not related to NVMe. Maybe a size problem?

Bad solution ? What are you going to do on Hassos with 2 TB ?

If you have portainer installed, you can do whatever you want without having to care about OS-stuff.

my first choice would be native hass.io. the nuc don’t do anything else…

@pvizeli @frenck @balloob Maybe someone of you has an idea, why this happens if using big SSD drives with HassOS?

@AndrejDelany Please don’t ping random people, that is not appreciated in general.

Okay, I’m sorry, I didn’t mean to be intrusive. I had chosen these three people because they are involved in AFAIK on OS launch. Sorry.

Don’t worry. I think the best place to raise an issue like this is the GitHub issues tracker for the operating system: Thanks. I will do it right now.

Did you manage to solve this? I am in the same situation, except I boot from a 64GB emmc. Not exactly what I would call a large SSD.

I have the same symptom, but it occurred when I migrated my VM from one host to another. I know there can be issues when volume info changes - the name changes, which matches these symptoms, the boot loader is looking for the old volume name. If I recall, you have to boot a rescue disk and update the boot volume name. I’ll let you know if I have any luck.

I’ll wait until I solve it, I’ve not been able to recover the boot yet with anything I’ve found. I could be wrong about the root cause. I was able to mount my config volume and copy everything out, so I might just make a new VM from scratch.

Having this same issue with 2 different Samsung EVO 250GB. It’s definetely not a SSD/HDD problem as I thought originally. Memory has been swapped out as well. If I image 4.13/4.14 with Etcher, HA boots successfully ONCE. Then after a restore and reboot, it freaks out with the original post above. Currently downgraded to 4.12 and I’m terrified of rebooting. 4.14 causes a hard lock up on reboot and requires re-image of the NUC file.

Interesting note, on 4.13. If I do a shutdown or pull power from the NUC, I cant seem to ressurect the install from the boot problem above. However, if I issue the reboot command, it freezes at the first screen above. But then an actual power button press on the NUC to turn off, and then turn back on, it boot properly in most cases.

TLDR; bad ram even though memtest gave a pass.

Alright, I spent about 14hrs on this problem so far. As posted above, I have 2 Samsung EVO 250GB 860s at my disposal. And then I started trying a Muskin 480GB SSD just for kicks and giggles. I went back to every release image from 4.15 to 3.03 and basically all of them had the same locking up as shown above.

I went ahead and tried to install Windows 10 thinking it could over-ride any errant UEFI entries in the BIOS after going through some Intel NUC forums, but received several bluescreens with different errors. So, I threw the RAM chips out and put in some small, but known good Ballistix 4GB…

HA image after burning, boots fine now. I will update on if this fix is permanent since a before a reboot would kill everything. But this is as far as I’ve gotten in several days so I’m keeping a positive attitude.

Had the exact same issue; this post helped me: My steps to success for Hass.io on Intel NUC

What I ended up doing was to take out the SSD from my NUC, connect it to my laptop, directly load the HassOS image for NUC onto the SSD, but it back into my NUC, booted and everything started like it should.

Perhaps it works for you as well.