Hello,
I live in a house with 7 other parties and we decided to make it smart-home ready by connecting flats by common network, which includes multiple MikroTik APs. In addition, we are going to install a 2N intercom, as the first smart-home system.
All devices shall be either powered by PoE or a central 12 V or 24 V power supply that is installed in the server room in the basement. We have to pull fibre optic to connect anything with each other as the cable conduit is not always big enough to allow a cooper-only installation. At least, we can pull a tow -pair-wire to pull power supply in parallel to the fibre, to power the switches / APs (which in turn supply downstream devices by PoE) by a central power supply

So, I am currently looking for highly efficient power supply units with each

a DC/DC converter from one voltage level to the other instead of the second power supply is also an option.

It looks like only the MEAN WELL Switching Power Supply Manufacturer UHP series is the proper choice (price-wise and in regard to efficiency).
A DC/DC converter doesn’t cost much less than an AC/DC converter, plus it is less efficient.
It’s quite late right now, but I’m quite right, don’t I?

The only remaining concern is their partial load and idle consumption, as there are some loads that are not on all the time (I dropped MW an email).

Anyone around who is using these power supplies or may have a better option in mind?

There are many reasons you do NOT want that type of power supply, mainly you should try to see what happens to the 12V bus when you have a short…

What you do want is something that is designed for the exact use case you are looking for. I am using this product:

It is a 10A output with 8 power limited circuits and a built in battery charger and interface, plus it has supervision relays for monitoring. They also make a 24V version which is also 10A

Thx for letting me know.
Is that your UPS?

, so I would something available in Europe for consumers but I could not find a supplier of Altronix over here (at least by searching it on my mobile).

Wouldn’t do a short circuit protection https://www.elprocus.com/what-is-a-protection-device-different-types-of-protection-devices/ (leakage current and circuit breakers) downstream the output terminal do the same job, would it?

At least there some MW power supplies with the right protection but these are not suitable for me
https://www.power-supplies-australia.com.au/blog/important-information-short-circuit-protection-mean-well-led-drivers

sent from a fair mobile

So it seems your problem is going to be you only can get on supply line up through the building without additional work. You can use the power supply you suggested but use fused distribution at each floor like this.

That is not my UPS, it is an auxiliary power supply for 12V low current systems only, like things connected to the home security system, including the ethernet bridge that connects the security system to my network, and will in the future be used for smoke and carbon monoxide detectors in the house. It also powers the doorbell which is integrated into the security system.

I assume they make equivalent power supply/charger hardware available to the EU market from some brand, such as Bosch, Bel, or Phoenix, though most in EU tend to be DIN rail mount type which is fine.

My primary UPS is a Cyberpower OL1500RTXL2U rack mount “on-line” UPS with dual extended battery modules, providing between 6 and 8 hours to my server, network, and main security system power. The security system has an additional large battery, which provides 24 hours coverage after the UPS fails.

Yes, a short circuit protector should do the same job for output protection, you need one per “channel” of power, as a short on the channel takes the entire channel offline. I am using half of the 8 channels my unit provides at the moment.

The main functional difference between the 2 types is the tolerance for voltage ripple, looser tolerances lead to a more reliable and simple design. Thats the reason why the Altronix PSUs have a lifetime warranty, however they are pretty much all 120V input so you probably cannot use them even if you wanted.

The UHP however has a whopping 240mV ripple @ 12v, which is not great for a switching psu, I would suggest the MSP series instead which is half the ripple, and it has a longer warranty, but is not as efficient. It also has a 60% longer hold-up time than the UHP, so a lot better overall.

For 12V only, you can also get a high quality computer power supply like an FSP Aurum and feed off the 12V rail, you will get peak reliability and efficiency at about half its rated wattage, so the 550W model would give you 200-300W

Also, depending on your network infrastructure and how distributed you want things (and how much you want to spend), you can just POE everything, and use end-point converters or distribution panels, that take POE in and output 12V AND 24V at the same time, these are pretty pricey, though they can give you insane flexibility, such as being able to turn off individual power outputs over the network, or killing the entire power feed at the switch.

These 2 devices stack on top of eachother, one has POE in and Ethernet/12V/24V out, the other has 12V/24V in and Ethernet for monitoring and programming, and switches to individually select the input voltage of the 8 individually protected channels, which can be individually monitored for load remotely.

Together they cost a massive $380, but can be placed wherever you can run CAT6, then feed devices where you cannot easily run long lines, but can run short lines, and depending on the use case and the cost of install, can save more money than they cost relative to running 18ga wire from a single location. 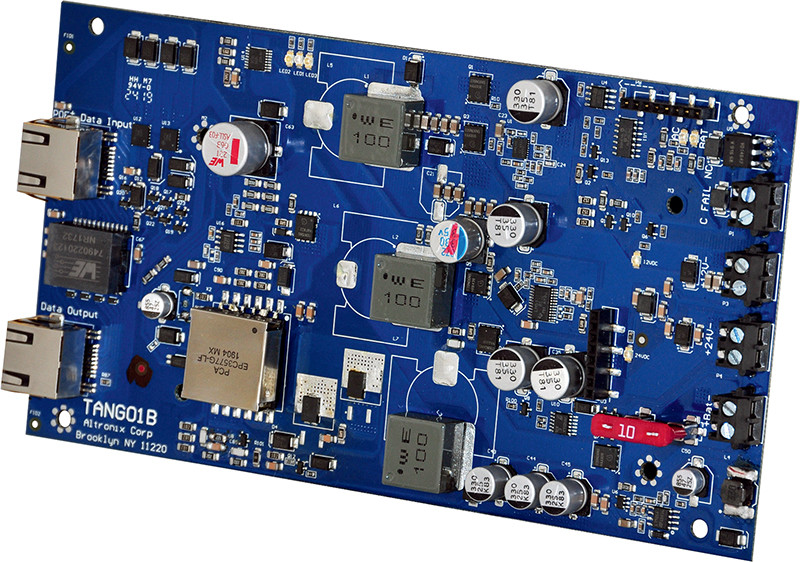 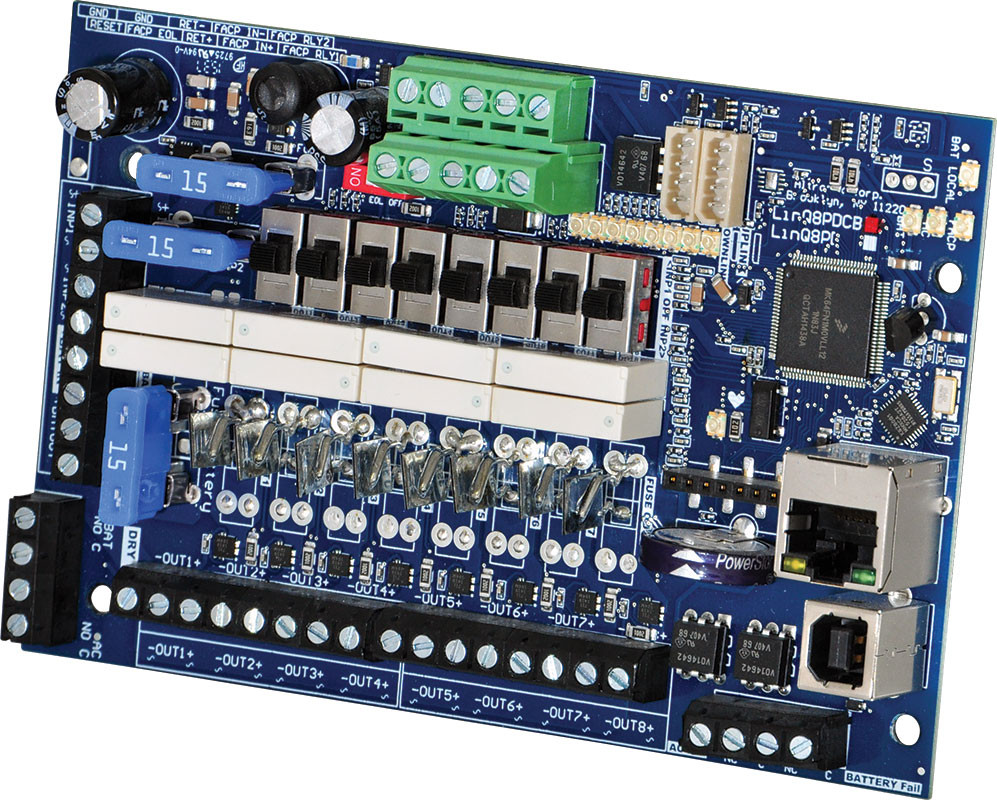 fused distribution at each floor

The UHP however has a whopping 240mV ripple @ 12v, which is not great for a switching psu, I would suggest the MSP series instead which is half the ripple ,

Looks like that all rail installable MW PSs have lower ripple voltage but still reaching >90% efficiency, depending on the type.
All MW datasheets say

and at least all rail type datasheets say

so may I dare to say that raises some confusion about what additional protection is required.
I read Current limiting - Wikipedia what says that could be the right protection type but going into more detail and reading Power Supply Current Limiter Circuits » Electronics Notes (electronics-notes.com) and Know Your Limits - TI.com tell me that it only protects current to go above its rated value

you can just POE everything, and use end-point converters or distribution panels, that take POE in and output 12V AND 24V at the same time ,

My problem is that I have these kinds of bottlenecks 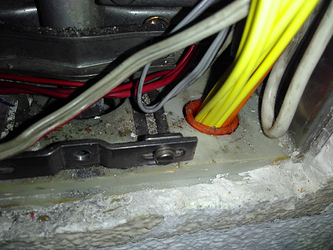 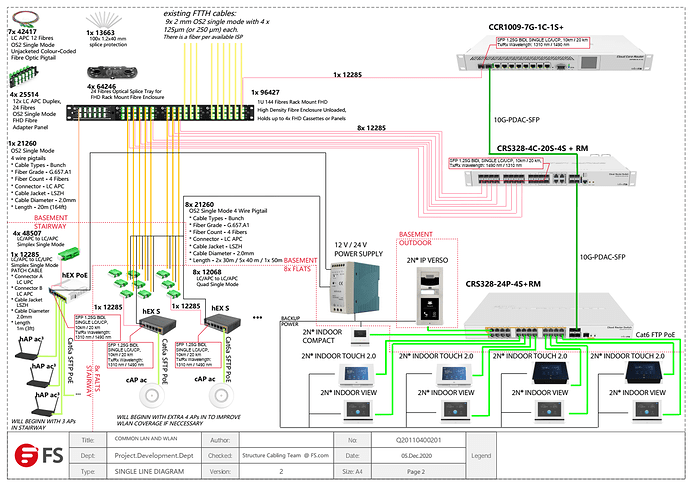 Together they cost a massive $380, but can be placed wherever you can run CAT6, then feed devices where you cannot easily run long lines, but can run short lines, and depending on the use case and the cost of install, can save more money than they cost relative to running 18ga wire from a single location.

For 12V only, you can also get a high quality computer power supply like an FSP Aurum and feed off the 12V rail,

could be quite a smart idea plus and 12V/24V transformer but I cannot find any shop selling the AURUM 500W | PSU | FspLifeStyle , checked most of its German reseller referenced on Where to buy | FspLifeStyle

the power consumption is somewhere around

but there shall be margin for further smart home extension

Together they cost a massive $380

if someone tries to find the spec they are here

more is available on Altronix Product Categories where you even super simple fused distribution like this
https://www.altronix.com/products/DP4

anything to add here?
It started out angry, but now it falls silent