Unfortunately I don’t know how to properly fix this.

There are still two workarounds that might get you by

You can find information on both options in this issue

As of HomeAssistant 2021.4.1, the inbuilt ping integration uses icmplib==2.1.1: https://github.com/home-assistant/core/pull/43868/files Ping in this version of icmplib fails in the HA iocage...

Thank you, I take the custom (previous version) ping integration.
Works very good for now.
But there is a log entry telling “Unable to find services.yaml for the old_ping integration”

The main problem is that ESPHome relies on platformio to compile firmware for the devices. For this to work in our jails, platformio must download certain toolchains made for FreeBSD however updated version are no longer provided

And also an updated toolchain-xtensa compiled using this github repo

I uploaded the pre-compiled toolchains to GitHub. Instructions to manually update are in this issue

Is there a new url for the compiled toolchain?

UPDATE on the ESPHome community plugin

By now the updated requirements have made it to the plugin manifest for the 12.2-RELEASE, and I’ve also updated the plugin to use the ESP toolchains I compiled. A clean install of the ESPHome plugin should (at least for now) compile both ESP8266 and ESP32 firmwares out of the box.

For an existing plugin, running a Plugin UPDATE from the TrueNAS UI should also work - but may require some additional steps. If the ESPHome service fails to start after a Plugin UPDATE, you’ll need re-create the ESPHome virtualenv. This can easily be done from the jail’s console menu.

Use number 7 to remove 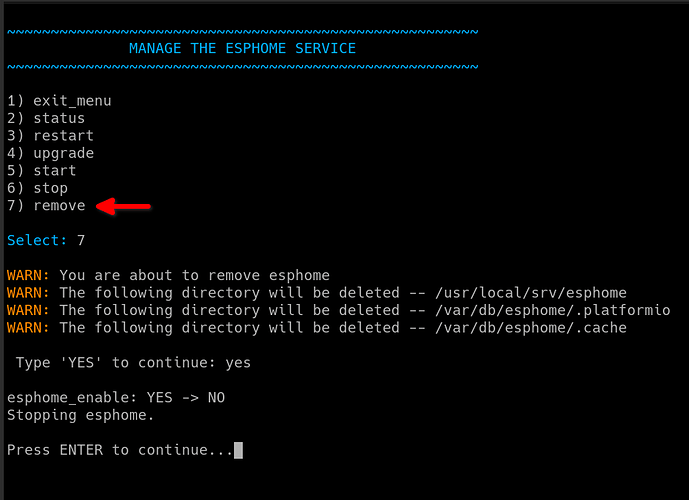 When the virtualenv is removed, number 7 will change to install 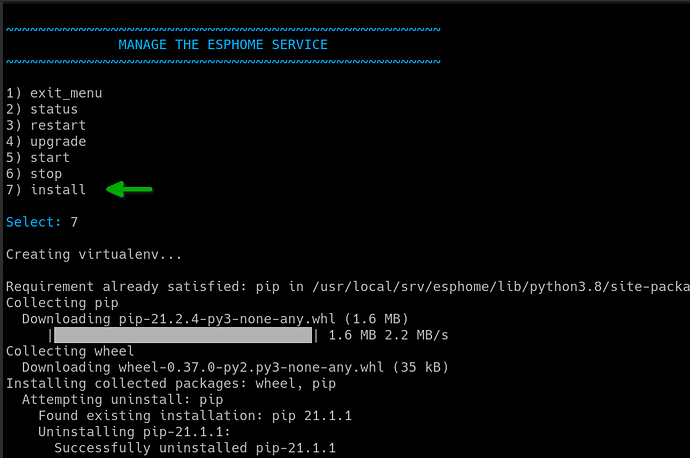 @troy So far the plugin was working very well and HA updates from plugin menu worked very well. Until today. When trying to upgrade HA to release 2021.10.0 the process fails at updating cryptography module with the following error:

Down in the detail log I can see that it fails at finding rust so I tried to install it in the homeassistant venv manually which fails as well. But also I can see that when trying to install rust in 1.41.0 the pip returns message that such version is not available.
Any ideas how to resolve it?

I have also tried to fresh install the plugin on the latest version of TrueNAS and it ends up with the same error. Below the full plugin install log.

@adorobis – I think you’ll need to install rust in the jail itself, not directly in the virtualenv.

Please let me know if this works.

Yeah, I’ve just realised that rust is not a python package… And bingo! now the upgrade was successful

Many thanks! Probably the plugin will have to be updated to include rust now.

Probably the plugin will have to be updated to include rust now.

Hello, thank you very much for your guide on the plugin.

PS: I am a noob on FreeBSD, TrueNAS and jails.

The installation isn’t working on my server. The plugin installs fine but the management page does not show up. Running service homeassistant start on the jail shell gives me this error : /usr/local/etc/rc.d/homeassistant: ERROR: /usr/local/share/homeassistant/bin/hass is not found or is not executable

The file /usr/local/share/homeassistant/bin/hass doesn’t exist and installing AppDaemon and the Configurator through the Console Menu didn’t help.
The only thing from the guide I did different was the jail DHCP, which I turned off and set as a static IP, however I think this shouldn’t cause a problem.

Thank you for your much appreciated help.

Hi @davifah – Sorry for the trouble

Currently there is a missing dependency in the plugin manifest.

I have just pushed a temporary fix for the plugin installation, please try the install again and let me know if it works. Thanks

It works now, thank you

Quick recap - if your trying to upgrade to Home Assistant 2021.10, there are two packages you’ll need to install before the upgrade is successful.

These packages have been added to the plugin manifest in the master branch at https://github.com/ix-plugin-hub/iocage-plugin-index - However they will still need to be merged with the 12.2-RELEASE branch before a Plugin UPDATE will install them.

NOTE about manually installing packages in a plugin jail

So how iocage handles Plugin UPDATES is that it completely removes all packages from the jail on update and then installs them new. This means if you manually install any packages in your jail they will be removed during the Plugin UPDATE and will not be reinstalled.

Some time ago, I added a workaround so users can install extra packages not included in the manifest and preserve them though a Plugin UPDATE. This workaround has never been documented before

Here’s how it works.

This is done inside the jail - For any additional packages you would like to have installed in your jail, you can create a pkglist. The pgklist is simply a text file containing on package per line. When created, there are two remaining steps to follow

You do not need to implement this workaround for rust or libjpeg-turbo since they will be added to plugin manifest but I figure now is a good time to mention this, since I have not done so before

Thanks @troy or sharing that info on jail updates! I have quite a few packages installed on the HA jail which are not part of the HA requirements. I’m hesitating to update jail the plugin and jail from the plugin menu, what would be your recommendation on when to do it? With every TrueNAS major update?

I’m hesitating to update jail the plugin and jail from the plugin menu, what would be your recommendation on when to do it? With every TrueNAS major update?

This is a great question but one that’s not so easy to answer because I (or any plugin maintainer) really don’t have full control over the process.

It would take me a month of Sundays to lay it all out in detail so let’s just say for now, there are differences in the way Plugin UPDATES and Jail UPGRADES are handled by TrueNAS.

In reality, it’s pretty hard to break the underlying jail and this plugin has several undocumented ways to reinstall Home Assistant, but troubleshooting takes time and often requires multiple attempts to get everything working again – Honestly, I think a Jail UPGRADE is more trouble than it’s worth.

I recommend users just reinstall the plugin instead. If you’re using an external dataset for the configuration, this should be rather trivial.

For a Plugin UPDATE… The more I think about it, the harder it is to answer. On one hand, even if the plugin manifest and artifact repo have not changed, regular plugin updates will keep system packages up to date. On the other hand, if that update includes a python point release (from 3.8.5 to 3.8.6) you should rebuild all the virtualenv to take advantage of any optimisations or bug fixes. In other words, they may continue to work, but you really should reinstall them.

There’s already some options for re-installing or upgrading Home Assistant during a Plugin UPDATE. I can trigger these as needed, or they can be enabled by users for every Plugin UPDATE.

clean-install will delete the existing, then re-install Home Assistant to a new virtualenv

force-reinstall will re-install Home Assistant to the existing virtualenv

They are checked in the order listed above. Only the first enabled action will be taken. Depending on the server hardware combined with the number of integration you’re using, it can take anywhere from just a few minutes to almost an hour to completely reinstall Home Assistant and all your integrations.

Thinking about it now, I need to add an option that updates the plugin overlay, without relying on a Plugin UPDATE - This would allow to at least keep the main files I provide up to date.

At that point, I would suggest to enable clean-install and run a Plugin UPDATE every 3-6 months, depending on how long it takes. At minimum everyone needs to clean-install Home Assistant about once per year, that is when the minor python version is changed (say from 3.8 to 3.9)

I think for the slowest servers or if you’re only updating to meet minimum python requirements, I would recommend to just reinstall this plugin on the about yearly basis.

Fortunately, TrueNAS will always take a snapshot of your plugin before a Plugin UPDATE (or Jail UPGRADE). You can see this clearly when updating a plugin using the TrueNAS console.

If this update failed or in some way breaks Home Assistant you can usually just rollback the snapshot.

Also worth mentioning here, any TrueNAS plugin can be exported to a zip file. If you’re planning to re-install, this is a good way to backup a plugin before its destroyed.

Keep in mind, if you are using a separate dataset for your configuration (as I recommend) it will not be deleted when you destroy the plugin, This also means it will not be included in either the snapshot or exported zip backup shown above. With that in mind, I suggest taking separate snapshots of your configuration on a regular basis, and especially before a Plugin UPDATE

Probably in the next month or two, I’ll need to update this plugin to use python 3.9. Since my last reply I’m thinking about some other small improvements I can make.

As I mentioned earlier, there’s a way to ensure FreeBSD packages get reinstalled after an update. But there is nothing to get your packages installed if you reinstall the plugin.

Here’s a quick way to that manually

Have you installed additional python packages inside any of the virtualenv ?

I, for one, am intrigued. Which other packages have you installed in HA and for what purpose?

@troy Many thanks for comprehensive explanation. Need to find some time to try the plugin update, good to know that standard snapshots are enough to restore it in case the update fails.
Regarding python packages - yes I have a few installed in HA venv as well as in another venv I’ve created in the same jail (I could actually consider moving it to a separate jail). But there is not many of them and I should be good to install them manually after plugin update (they show up in HA log immediately if missing).