Hi guys, I would like to request your help with a painful matter:
My install HAOS on a mini PC is failing to boot after a restart with the following: 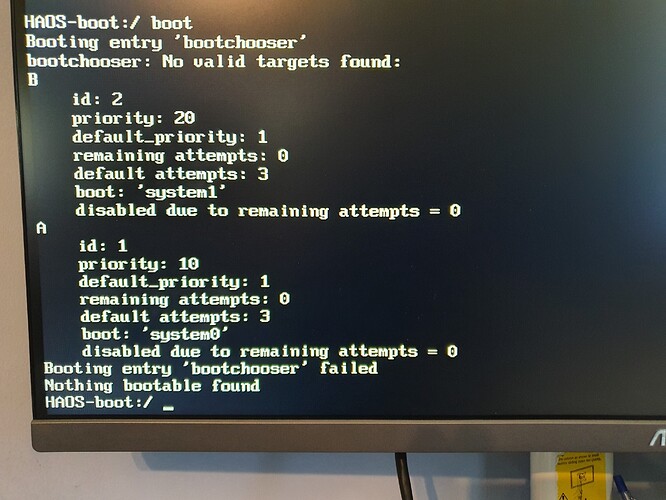 Unfortunately I could not found a solution with googling for a while, I would appreciate very much if someone knows a recipe to fix it.

My setup is a miniPC with 240GB SSD dedicated for HAOS as native installation, no virtual machine involved, only system on the machine. It was working and I was happy until I had to restart the machine physically and from that moment It continously fails to load.
I’ve double checked my bios/uefi config to have the specific drive marked for UEFI boot, just to be hundred percent sure…

I would like to save my system as I spend a lot of effort to make all my sonoff and tuya devices working with LAN control.

HAOS has a redundant booting scheme: when the current slot fails three times in a row to boot, the old slot is retried, so you at least get a running system. Unfortunately, you have both failing and thus the system doesn’t continue boot anymore to avoid infinite reboots.

What would be interesting to know is why it fails to boot. Could you try:

This will reset your boot attempt counters and reset the system. It’d be useful what would be then printed to the console on next boot.

Thank You very much! Actually found the real reason, there was 2 bootable device in the mini PC, both had HAOS and no matter which one was set as boot, none of above could actually boot itself… My bad, really, tho also needed to reset boot counters afterwards…

Could you describe how I can reproduce this? I’d be interested to see if such failures could be avoided in future.

Sure thing, so let me descibe the situation:

I have a Dell Optipex mini PC for Home Assistant purposes, my main idea was to have a dedicated HAOS installed on a SSD and have a secondary HDD for NVR, video recording purposes from security cameras.

The thing was, I had also HAOS installed on that dedicaed HDD for NVR because I was making experiments on another machine, which however supports UEFI, but unable to boot HA, it is an old ASUS Eee Box.

I managed to put the 2 drive in the same machine, SSD was selected as primary boot, however when I started up, I ended up on the screen what I meantioned above, and to be honest, I was never even had a suspect that I had still not formatted HDD in and also not that when I realized it, that another HAOS was installed on it.

So in the end, somehow it is absolutely my bad.

Now I also see that HAOS lacks some features regarding drive management, thus not suitable to be a NAS standalone, however would be nice that It would have the necessary capability for drive management, more freely configurable samba share and nfs share.