I’ve been trying to figure out how to have Home Assistant suspend computers given a certain event.

I have found tons of posts about how to enable ssh TO Home Assistant OS, and several posts about sshing into a remote host from HASSIO, but those all assume the standard linux tooling.

I attempted to put a generated id_rsa/id_rsa.pub in the /mnt/boot/CONFIG directory likee you do with the authorized keys file but that didn’t work.

How do you generate SSH keys on the Home Assistant OS so that it can interact with remote machines?

Haven’t tried it myself yet, but Home Assistant OS appears to be based on Alpine Linux, and everything appears to run as root. Did you try putting the keys in /root/.ssh ? ssh-keygen exists if you use the Terminal/SSH plugin, and that will generate keys in that path by default.

Alternatively, you should be able to use the -i switch to point at the path you saved the private key to.

Thanks for the reply!

You can’t create anything on /root:

The layout of Home Assistant OS is as follows:

However, based on your idea (/config doesn’t exist) I have noted that most of the user-writeable files exist in

I’ll try putting the keys in there and see if that will work. Great jumping off point. Thanks! 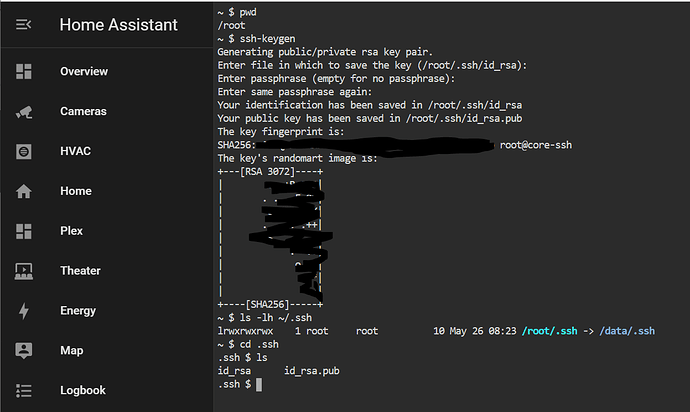 Looking at the docs for the Terminal/SSH addon… it says:

Regardless of how you connect (using the web terminal or using an SSH client), you end up in this add-on’s container. The Home Assistant configuration directory is located on the path /config .

I tried using my key:

This lead me to looking into dropbearkey so I did this:

In my /mnt/data/supervisor/homeassistant directory and the ssh command works. I’d prefer not to use an additional plugin if not required.

I’ll post my solution once I get it working

following up on my own post here is what I did. After using the dropbearkey to generate the file I tried logging in with that but I was still getting a return code error of 255.

I logged into the target and confirmed that it was not receiving a connection attempt. Realizing that I ended up discovering that whatever mechanism the shell_command is using (a container?) is failing DNS resolution attempts. I switched the script to using an IP instead and I started seeing the connection attempts however I was seeing this error on the host:

This converts the key from dropbear to openssh. After this was correct and I ensured that the script was referencing the correct keys, the shell command worked.

For testing, I made a button in Lovelace that uses the shell_command service to call the command