This is my first Z-wave device. I got it at the same time I got the Aeotec Z-stick. 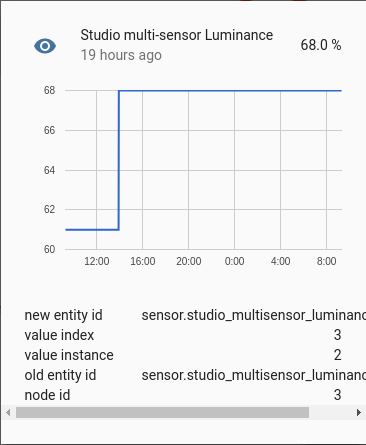 So I guess the problem is kind of obvious. It updates ridiculously infrequently. I just don’t really know what I’m supposed to change in order to make this useful as a motion sensor.

What does HA show in the dev-tools states page, the image you supplied indicates HA is only seeing it as a lux sensor, so it won’t update much. There should be at least three sensors, one each for lux, temp and motion and possibly others for battery state and alarm state.

You can try two things

Do you get motion notifications from the HSM100 sensor?
I have 2 of them, 1 mains powered and 1 battery powered;
They show luminance and temp, but no motion.
br,
Raymond

I think I have the same problem. I have luminance, temperature and “general”. I guess I assumed General meant motion…

Do you know of a way to get “general” converted to motion?

Hi,
I have the same problem with “general”. I think it is not the motion sensors.

With the new version (0.64.1) i’ve tried to exclude / include and general just disappeared… SO i have a motion zwave sensor which juste give me luminance and temperature (awesome -___-).

I try to resolve this problem, for now my only clue is the way that it is included is not correct : i buy a Ezmotion Sensors and it is added as HSM100 (the configuration is the same i think).

Nobody have the same problem ???

Another clue : i’ve try to had the device into jeedom which is nice on it. I try to compare home assistant and jeedom for now.

Hi,
i have the same problem, any idea ?

Nothing new for the HSM100 and motion detection?