Is there perhaps a way for us/me to switch to this behaviour by changing a specific line(s) of code (locally)?

I’m aware this will have to be done everytime I upgrade to a new version and might break in future versions, but at the moment the current behaviour means I can’t use this integration with any (semi-)standard climate UI component.

Thanks again for your amazing work!

Create your own github fork (click fork), edit the code, import your fork. Then, merge changes from the master as/when

I’ve done this below: 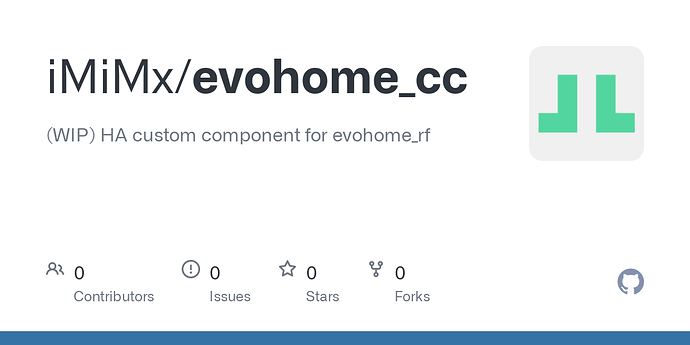 (WIP) HA custom component for evohome_rf. Contribute to iMiMx/evohome_cc development by creating an account on GitHub.

I had a few days of someone nudging the climate UI to change the temperature and setting a permanent override, which was not how we’d been used to using evohome before this integration.

I was looking for the specific required code change and I think I found it here: Update climate.py · iMiMx/[email protected] · GitHub

also tried the scripts found here (but these are only for the gui): 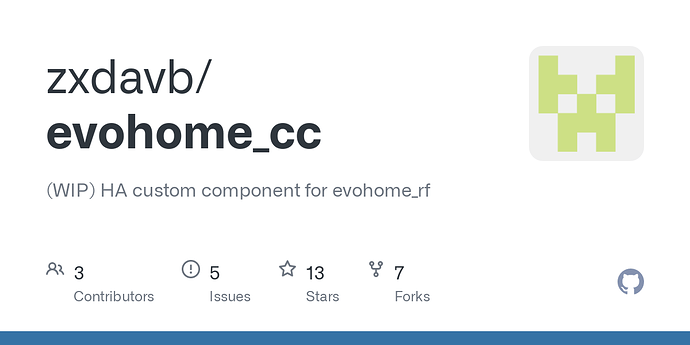 (WIP) HA custom component for evohome_rf. Contribute to zxdavb/evohome_cc development by creating an account on GitHub.

with this script i get the error:
cannot call script/evohome_simple_thermostat extra keys are not allowed @ data[“setpoint”]

I am shortly about to release a new feature - faked zone sensors.

Be aware, zones can only have 1 (or 0) active sensors.

The faked sensor behaves like a round thermostat, and the current (measured) temperature can be set via a HA service call. Note that there is no value in emulating other TR87RF functionality, such as changing the zone setpoint (target temperature), so do not expect this to happen.

The emulated (faked) zone sensor works with an evofw3-compatible interface, but not yet with a HGI80 - there are deep design features of evohome_rf that make this difficult (in essence, because a HGI80 is a HGI80 & not a TR87RF and evohome_rf is very strict about these things)…

… nonetheless, I am committed to making a HGI80 function as a faked zone sensor at some future point.

Another advantage with an evofw3-compatible interface is that you can have sensors for multiple zones, and not just the one zone, as would be the case with a HGI80…

In future, relays will also be fakeable (able to be emulated)… even more reason to buy one of these USB dongles

So if anyone is interested in testing, you need a evofw3-compatible dongle, and a HA thermostat, such as, for example:

The idea is that you use an automation to pass data from the thermostat to the faked sensor.

To set up the faked sensor:

To update the zone (measured) temperature

Do let me know how you get on with it.

The answer is that this will have to wait until profiles are implemented - it works for evohome, but not non-evohome systems.

Does this mean profiles are not ready to test with Hometronic yet?

can this made configurable maybe?

That is the plan.

Does this mean profiles are not ready to test with Hometronic yet?

Not yet - you (hometronics) should set max zones to 16, and enable eavesdropping.

@zxdavb I am interested in the fake zone sensors!

What could be the problem, the temperature entities are still getting updates.
I see no errors in the log.

Updated to 0.8.6 last night and its stopped working.
Tried a reboot this morning, check device link to what’s in my configuration.yaml and all looks good there.

Have exactly the same error occuring…

Just commented out the relevant elif statement in zones.py and now works again. I guess the Controller device does not (yet) have the fake device code…

I guess the Controller

do you have the problem that the status goes away?
normaly i see this: 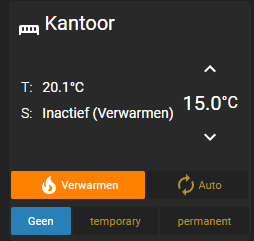 but after an hour i get this: 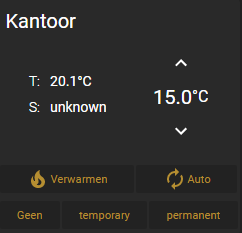 Oké thx for the conformation, than i don’t have to look further in my config.