How to count pulse frequency accurately with ESPHome?

I’ve got a light sensor on the flashing led of my electric meter, and using the pulse counter in ESPHome, I’ve got it working fairly well, and it gives a ballpark figure in KW every 60 seconds. The problem is the pulse meter sensor in ESPHome appears to be inaccurate, in that it tells you how many times it’s flashed in a given period, and thus is confined to give whole numbers. For example, if the led on my meter is flashing once every 50 seconds, and I want the reading every minute, ESPHome alternates between reporting 1 or 2 pulses per minute. I’d like accurate data, so I’m trying to work out how to get it report the correct 1.2 pulses per minute.

The only way to get more accurate data is to count over a longer interval.

That seems like a massive design flaw of the system, in that it has no choice but to give a rounding error.

Does this mean if I want an accurate power readout, I’ll have no choice but to determine the time between pulses somehow, and then once every minute poll what that number currently is?

So…?
You have a photoresistor that reads the led and that hooked up to the analog input?

You could also use a digital input and just pass it to a counter (or something) in HA.
That way the LED “wakes” up the ESP.

Or maybe I don’t understand…

EDIT: maybe I understand now. Can’t you use a statistics sensor to smooth out the data?

The design flaw is your meter’s low pulse rate.

Set the update interval for 5 minutes. Capture 5 times as many pulses. Get at least a fifth of the quantisation error.

This isn’t an acceptable solution to me as it means you have to wait long periods of time to improve accuracy (and never achieve it). This seems a daft approach as after just two pulses all the information required has been gathered, and is exact. Waiting longer AND having less accuracy isn’t what programming is about in my opinion.

Anyway, I’ve solved it, and thought I’d share my code incase it helps others, or ESPHome want to use it to improve their https://esphome.io/cookbook/power_meter.html example.

The above code uses the pulse width sensor to measure the time between pulses in seconds and then divides 3600 by it to give the watts being consumed between the last two pulses.

At the moment there is a problem of the reading only changing when a new pulse is received. So if the house was consuming 1000w and then went to a consumption of 0w, the value would stay at 1000w forever. I’ll have another cup of tea and a think, but I guess my only solution would be to have the sensor detect when a certain time had passed and then drop the output.

Hope this helps someone, and if anyone can think of a solution to the value adjusting with no pulses, that’d be cool.

I think you have come full circle here. You want to use the ‘accuracy’ of the second method pulse to pulse, but the ability to see the behavior minute by minute. I’d suggest using either a wider the interval as already suggested, or shorten the interval of measurement and use a moving average filter. Say measure pulses every 10s, but average over a few minutes. Instructions for setting up sensor components in ESPHome.

For me, accuracy trumps frequency, so I guess I’ll just have to stick with what I’ve got. It’s only drawback is that very low values can “stick” but that’s only for 5 minutes at 12 watts. So I’ll probably leave it as the chance of my house drawing less than that are pretty slim.

None of us can help you make your power meter better. The data is the data. If you want more data, try a current meter.

The problem is that using pulse_counter, with an update every minute, the resolution of the electricity meter is limited to 60W. To get to 1W of power resolution I would need to integrate over an hour which would give very poor temporal resolution.

Ideally, I think I want to do two things:

I’m thinking of writing a new sensor called pulse_meter that will give both an instantaneous measurement (by measuring the time between edges rather than the pulse width and outputting on every pulse) and also count the total pulses. Before I start tinkering with this, is there another way of doing this that I might have missed?

Here is what I did:

I used to have a service call in this code block to increase a counter as well, keeping track of consumption (kWh).

However, it turns out that apparently the gpio platform does not utilise interrupts, cause I was seeing a discrepancy between my counter and the meter in the electricity cabinet.
I can even observe this with the kW sensor, with high loads (10kW) it sometimes drops to 5kW briefly, indicting a missed pulse.
I opened an issue on the ESPHome repo, but it received 0 replies…

So I added the pulsecounter platform to count pulses (kWh) and accepted the fact that the power sensor sometimes misses a pulse.

Sidenote 1:
Using a service call directly to HAS avoids loosing pulses when the ESP reboots (I want to avoid writing to memory in ESPhome, prolonging flash life), but now I have the problem I’m loosing pulses when HAS reboots. I am building an automation which at the end of the day compares daily pulses from HAS and ESP, and increases the counter with the difference.
EDIT: another downside of directly incrementing a HAS counter is that during WiFi disconnects (a rather common occurrence on ESPs) we miss pulses as well.

I have noticed this behavior on an ESP8266 as well when using the gpio and pulsecounter platform for the same pin. On an ESP32 this works.
A jumper wire solves this problem, but sacrifices an input pin (which are scarce on the 8266).

I will hopefully have time to look at the C++ code over the next few days and put something together.

That would be great! Are you a ESPHome contributor?

Not yet! I will submit this back to the project though.

I have this working, just testing a bit and then I’ll post it here for people to play with.

OK, the attached code implements a new sensor called pulse_meter. This has a very similar setup to pulse_counter, with two key differences:

These two together allow you to get the best possible temporal resolution (a measurement for every pulse) and accurate totals (as we can really count the pulses rather than trying to integrate the frequency).

Here’s an example config for my electricity meter that outputs 1000 pulses per kWh:

The setup is much the same as pulse_counter with a couple of changes:

Here is some output showing pulse_meter vs pulse_counter:

You can see that the new sensor (blue) tracks the usage much more quickly than the pulse counter (red). In particular it shows spikes that the pulse counter will miss, and doesn’t hunt up and down (see the period from 14:39 to 15:09 as a good example). It does however track the old sensor pretty well which is reassuring. Unpack it into your esphome directory (this will be in the config directory for hassio).

Thanks @stevebaxter for the improvement on the counter!

Sadly it does not work on my side.
I also have a counter 1 pulse = 1 Wh
If i integrate the sensor 1:1 copy of our senor code i have 2 issues: 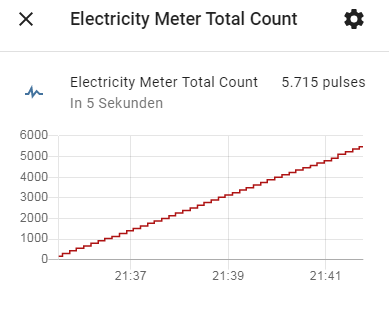 any idea what is happening here?

Hmm, that’s odd! Can you share the output from the ESPHome device log? That will give me the full config and allow me to see exactly what is happening.

One thing I had to do was to use much longer values for the “internal filter” (around half the minimum pulse width), as noise on the pulses will cause very high readings. Even then I had a problem with occasional spikes, I used a median filter to remove that. That doesn’t explain what you’re seeing though.

This is my full sensor config for reference:

For the electricity meter my filter is 100ms (5 pulses a second is 18kW which is way more than our house would ever use). For gas it’s even longer (4 seconds).

I’ve updated the custom components archive with the latest code (there were some changes which were only cosmetic but maybe I missed something). You can find it at the same URL (https://www.dropbox.com/s/6tn8th7mmtvwlup/custom_components.zip?dl=0).

Actually, are you sure your multipliers are right in the filter? Looking at your graph, is that over 5 seconds or 5 mins? If it’s 5 mins there appear to be 14-15 steps each min, that’s 840-900/hour or nearly 1 kW which sounds about right. The raw data from the log will tell us though!

Thanks for replying! Possibly there was some bug in the original code, apologies for that. Glad it’s working!