How to make smooth transitions between CT and COLOR modes?

I recently bought a BLF10 Kauf Bulb and it works great! but there is one thing I don’t like and it is a deal breaker for me.

When the bulb is on CT or COLOR and transitions from one to another mode, the bulb gradually turns off and then turns on in the corresponding mode instead of smoothly transitioning between them.

This bulb runs ESPHome and I can be easily flashed with a custom firmware. I created a new light entity using the RGBWW platform. Now the entity is shown on HA as the following image:

But when I try to set the bulb to any temperature from an automation or node-red, it uses a mix of the RGB and the CW/WW to achieve the requested temperature instead of using only the CW/WW channels. And the temperature given by the bulb doesn’t seem accurate (too cold).

Now if I activate the “color_interlock”, the color picker now shows both CT and COLOR mode (as shown in the next image). Just as I wanted, but again it can’t transition between the modes without having the bulb turning off in between. 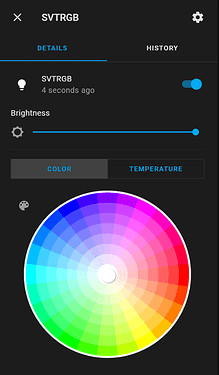 So my question is: Is there any work around to have the transitions go smoothly between modes without having to deal with the color picker from the first image?