So I’ve spent over two days trying to get this to work and finally achieved success, but thought I’d share my experience.

Plan A: Use the official NUC image (failed)

This was a very frustrating experience. At time of writing, the installation guide says to write the image to an SD card. I downloaded the NUC image and flashed it to an SD card. However, NUCs do not support bootable SD cards according to Intel (and indeed mine wouldn’t see it as a boot option despite tinkering around in the BIOS for hours).

So I flashed it to a USB stick instead, but this seems to cause the NUC to freeze on boot. If I press enter at the black screen some terminal output seems to briefly flash and then vanish, and if you press it enough the device reboots. :-(. Then I saw people saying that the NUC image is not bootable from USB and suggesting I physically remove the SSD from the NUC and flash it directly. Didn’t want to do that, but I found a forum post recommending using a linux live USB and dd to write the image directly to the SSD. I did this (having shrunk the windows partition to make room), but the machine refused to boot on the new partition. Rebooting on the Windows partition, Windows appears to be toast - boots into recovery tools but all attempts to recover fail.

(no ill feelings here, I chose to take that risk).

Plan B: Run as ‘supervised’ on a generic linux host (failed)

Many people say on the forums to install “home assistant supervised” in a docker container on a generic linux host. But these point to a section of the install guide that no longer exists, and there seems to be a long and painful thread about a desire from Nabu Casa to deprecate this method.

Honestly, from my relatively naive viewpoint this approach seems unwise anyway, and it seems very ambitious of HA to try and support it. In any case, this failed pretty quickly because Ubuntu refused to install on my NUC due to some Intel drive acceleration thing that I would have had to disable and I was not feeling especially good about this approach anyway, so I gave up pretty quickly and moved on to…

After a few false starts I managed to get a bootable windows install USB to boot (trick was to use FAT32 instead of ExFAT in my case it seems) and reinstated Windows. Then I installed virtualbox and the extension pack, and followed these instructions to create a VM to run HA in.

The key thing to realise here was that when the VM boots, there is no “Home Assistant has started, please browse to https://a.b.c.d:8123” line emitted to the output, it literally just stops generating output when it’s done booting and you then need to open a browser to continue setup. My VM output ended with:

I stared at this, waiting, for about 40 minutes and then found this github issue comment which prompted me to scan my network for new hosts and found the IP.

Other things I found tricky:

Why not run Proxmox on your NUC and install it as virtual machine? I have this running for months now, runs very well. Contribute to whiskerz007/proxmox_hassos_install development by creating an account on GitHub.

Never heard of Proxmox, but it sounds like you’d end up with something similar to what I have now, so… sounds sane! One advantage of having Windows in the house somewhere is that if I need to run something that only runs on Windows, I have a Windows machine!

Here is the updated NUC instructions which is buried well down in my original thread (but linked at the top). I’ve used this recently and it went without a hitch.

I’ve also used Promox and while this is relatively easy using the script, I didn’t like the overhead of having to login and mange another system so ditched after 3 months or so and went back to the direct image method.

I could not get that script to work. It downloads the vm but fails with unknow error after it installs it. Are you sure this is for proxmox and not esxi?

Yes I’m sure is it for proxmox.

Never could get that script to work as it kept installing, then deleting the new vm. I suspect it was because my vm’s are stored on a nas and proxmox connects to them via NFS However several people send me manual instructions which worked fine.
Here they are for anyone else having issues- note you may have to make minor adjustments for your particular setup but it does work: 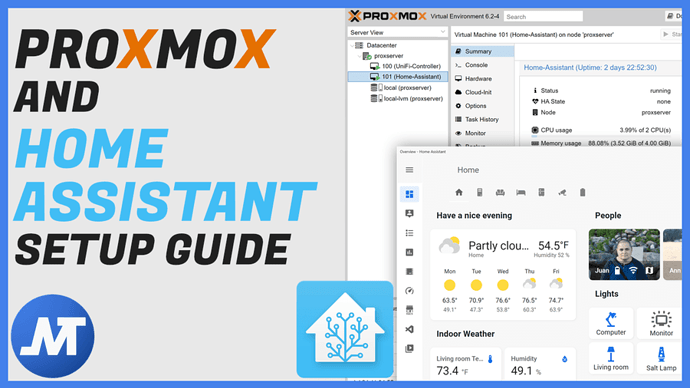 I’m going to show you how to install Proxmox. Go over the web interface. And we’re going to create a virtual machine and install Home Assistant.

Hi Andrew,
I just installed HA on a windows machine in the way you described it with virtual box. Nearly everything works fine except some settings.
Some example: when I click on the user name to enter the menu where I can change the theme to dark, the theme is changed. But if I log in the next day again, it is back to default (light) mode.
Or when I log in to home assistant and check the box for remain logged in (I hope it is the correct translation from german to english) I have to log in once again the next time when I want to access home assistant.
Do you have any tip for me, how to solve the situation?
Regards Dieter