Are you able to extract the number of and user list of currently playing streams using this component?
Thanks

Question about using this with google cast.

I have 5 chromecast devices in my house; when I am in the Jellyfin app, I can cast to “Google Cast” which brings up a sub menu showing the individual devices. I’ve included screenshots. My list of devices also includes an Onkyo Receiver, which is outside of that.

It seems the automatically created entities include the receiver, but not the individual cast devices.

Is it possible to somehow manually add the cast devices? I don’t know how specifically cast works under the hood. My guess is no; what has to happen is I initiate casting from the jellyfin app, and once that’s an active player the HA integration would be able to find and control it, but not initiate? 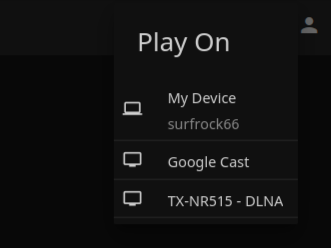 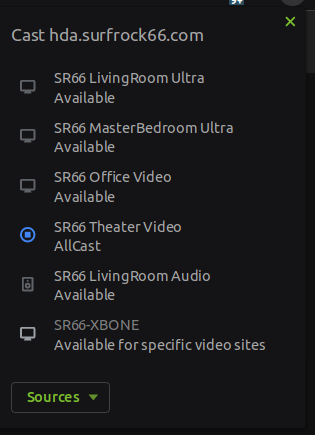 I’ve just discovered Jellyfin integration and decided to try it. Howether, there is something wrong, when I try to set it up. What I did was:

How can I trouble shoot that? There is nothing concerning jellyfin in logs, except standard “We found a custom integration jellyfin which has not been tested by Home Assistant. …” message.

Thanks for this integration! Love how this integrates with HA’s mediabrowser. One question about that: on my instance, I don’t see any album art, just empty square boxes. Both with individual songs/albums, and with folders, collections, genres, etc. Is this a bug, or are images simply not supported (yet)? Thanks!

No, it works. A common reason for this is mixing http and https, e.g. HA is in https and jellyfin in http, or vice-versa. Browsers typically reject mixed protocols.

Ah, that makes sense. Indeed I use HA via https, but connect to Jellyfin on localhost via http. Jellyfin is also externally accessible via a https reverse proxy, but trying to connect to that throws errors. I’ll investigate further.

OK got it to work in the end on the external https-only reverse proxy URL. Images load very slowly though, and often generate errors (I assume due to timeouts). Given that I also experience slow image loading in Jellyfin itself, I assume this is a Jellyfin issue, not an issue in the HA-integration or its interaction with Jellyfin.

Great work, Koying. Thank you for this! This is the only way I can get my Jellyfin to stream to my Chromecasts right now as I don’t have Android & IOS doesn’t cast. Life saver(wife saver, really).

Still no solution to call a specific playlist from HA ? I can browse my Jellyfin medias through the media browser of HA but no ID or anything that would allow to call back a specific media/playlist of Jellyfin from HA and get it played on a specific media !

If I’m sharing my jellyfin library with my family, will this integration expose when they are watching something?

Maybe node red could be used to reproduce the list created by jellyfin in google home?
Or if someone knows how to add a folder to play that content randomly or normally, without having to add one by one. Or get the id or something like that.

thanks for your work as well