Log is filled with "Error: KNX bus did not respond in time to GroupValueRead request for X/X/XX"

I am on 1.115 and use HASS to control my home which is connected mainly through KNX.

Despite this, my system seems to work. But still - it causes me some worry.
The “4/X/XX” addresses are mainly knx binary sensors.
Any clue on how to fix this?

This should be better in HA 0.116
If you still get these errors then, the addresses are likely not readable.

@Kalenden you marked my answer as solution. Are you running 0.116rc ? I’m asking because we got feedback that this issue was not solved with xknx 0.15 too.

I also get these warnings after upgrading to 0.115. I really hope, they are gone with the next version, as this failure to read most knx states on startup causes issues with automations and scripts working with these states. In my case, because of non-existing current_position attributes for covers, that are only created when I’m moving the cover manually or forcing a state update via ETS.

@farmio: Do you know, if this is only a startup issue? Are these attributes at least updated by the states updater after one hour? Or does this also fail?

As far as I know the states get updated normally, even in 0.115. Its just 1-2 seconds to slow so this error gets logged.
States will now only be updated after 1 hour of no reception.
I’m already on 0.116rc so I can’t test this right now. You will see on Wednesday, I guess.

I can’t confirm that all states are updated anyways despite the warnings. Neither on startup, nor after the state updater ran. At least not the position states for my covers. I have to force the cover actuator to send the current position to the knx bus, f.e. by moving the cover briefly. Only then the current_position attribute appears for that cover immediately.

For states of other devices I also suspect, they aren’t restored by actual state readings from the bus, but rather by the builtin state restoration currently because of this timeout issue.

But as said, I’ll wait for a stable 0.116 version and hope this is working again.

Unfortunately, updating to 0.116.0 didn’t solve this issue for me. KNX states aren’t updated for devices, unless they send their state to the bus by themselves. Neither on startup, nor by the states updater after one hour. The states shown after startup seem to be only restored states from the internal HA states restoration.

It works on my installation.
Do you have log entries from knx?
Can you see GroupValueReads in ETS Diagnostics after restart?
Can you show configuration?

I’m having the same issue on 0.116.1
It looks like some timing is wrong.
If you look at the log below and compare it to what I see in ETS you can see that it looks like the timer for the timeout is already started even before the GroupValueRead message is sent to the bus. Only responses that arrive within 2 seconds are processed correctly. Only the first 3 responses are processed correctly. All others fail.
I guess the messages are dumped into a queue for transmission but that the timeout timers are started when they are added to the queue? 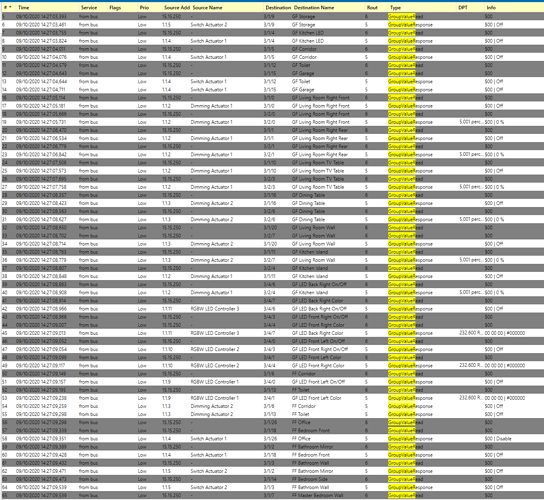 But I wouldn’t know why the incoming telegrams aren’t processed even after the timeout expired (and the error is logged).

If there is anything that needs testing, I’m happy to help!

Hi together,
I will also be able to help. Having the same problems.

The same problem here, also it looks Home Assistant is not sending all of the requests to the knx bus

If you know how to, you can test the fix: https://github.com/XKNX/xknx/pull/457

I did a test and it is way better. Thanks!

Every now and then I see a timeout in the log after a restart (at most 1 on my system) even though the device replied in under 300ms. I would guess this is because of delays in HA itself during startup?
I didn’t always see the Could not sync group address... message though.
Log:

How can i test it?

how can I reach the xknx files on my home-assistant instance?
I can’t find the file even via terminal not.

You shouldn’t change the files directly. Use the xknx custom component there is a guide at xknx.io on how to do this.
That said it doesn’t work on every system (eg. hassio can be problematic) and you will need basic knowledge of git and Shell. It’s more or less meant as a developer tool.

I can´t find it on xknx.io. Can you shortly describe how it has to be done?

To be honest, I think you should just have a couple of weeks patience until this is in HA.

A KNX library written in Python