And in 0.82.0 all devices works. Thanx a lot @Danielhiversen 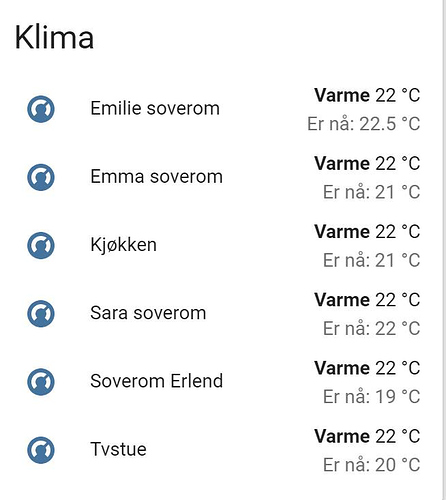 I have an automation that set the temperature for 3 Mill heaters at the same time. Most of the time only the first one will be set successfully while the rest will remain untouched. No error is logged in HASS.
My current solution is the set a 5s delay for each heater in the automation. Is that possible to add queueing if multiple commands are issued at the same time? Thanks

Does anyone know what does error code 3017 stands for? I got this error logged in my hass once in a while but the component itself works fine for me

Mill has some server problems.

The Mill app will probably not work when you see the errors in HA.

The error handling will be improve from HA 0.84

You can modify my custom component for it: https://github.com/Danielhiversen/home-assistant_config/blob/master/custom_components/tibber_prices.py

Thanks for doing the Mill code!
Do I understand correctly that the HA Mill component communicates with a Mill server for it to work.
Or are the panel heaters locally controlled?

If not locally controlled, any chance to make this work?

It connects to the Mill servers.
I am sure it is possible to control it locally

Emailed Adax and some other producers and it looks like Mill is the only one, maybe publishing their API. Just a shame we can’t select to control the heaters locally. What happens if your WLAN goes down….

Yes, local access is preferable for many reasons: https://blog.roysolberg.com/2019/01/mill-heat.
I have been in contact with Adax, and they are working on an API. But I think it also will be cloud based.

I had a brief conversation with Mill via mail about 3. party integration, and they’re currently working on getting IFTTT up and running. I would hope that means local control?

The thermostat component shows “heating” constantly even when it’s not.

Also, curious why my heater has a “fan mode” displayed? It’s the AB-H1500WIFI so obviously no fan, but it does have 3 power modes that I can’t control from HA.

So since I did not want to be depending on internet and that their servers were working I opened the heater and started looking.

I found a chip that could be programmed, but having been down that road before without any success I chose not to do that.

I checked a bit more and found some headers that gave me 3.3VDC and one pin that I could control the relay.

So a small esp-01, changing the temperature sensors (since I don’t have a ADC on the esp-01) and some wires (no soldering). I now have full control over my heater. And if it breaks, I can just connect everything back and still have full waranty.

And with my knowledge it won’t be able to cause any more risk that the oven can start a fire. (There were no internal control in the chip telling the oven to turn off)
I also added in the firmware that if room temperature is hotter than 28degrees celcius it would turn off.

I would like to see if this works as well.
I have a Telenor 4G as WAN failover. Whenever the network switches to the 4G, Mill (even with the app) stops to work. I guess Telenor blocked some proxy/websocket that are used by Mill.

If you do what I did you have full control and can implement how you want with Home Assistant. No need to go online.

Do you have a sketch or code to share? Thanks

Will try to make something during the weekend. But it might depend on the model. I will post what I have.

I have created a guide on how I did it. Hope it can help. And please give feedback on improvements.

I will try to make a guide on how to modify a millheat oven so you can have full local control off the device. So no need to rely on Mill’s servers or API. I have a Mill Glass https://www.millheat.com/mill-glass/mb600dn but I think this could work on most models, since the wifi device basically is only turning on and off a relay. (Open up your device, look for labels and do some measuring) NOTE I: If you do it like I did, there is nothing that breaks, and you can revert the modification if th…

Is there a way to use the Mill component with another sensor? I have the heater below a window and it reports lower temperature than what’s in the rest of the room.