Modern template sensor definition style: how to initially set entity_id and friendly_name (and what about availability variables)?

I’m trying to use the “modern configuration” for a template sensor for the first time (according to Template - Home Assistant). 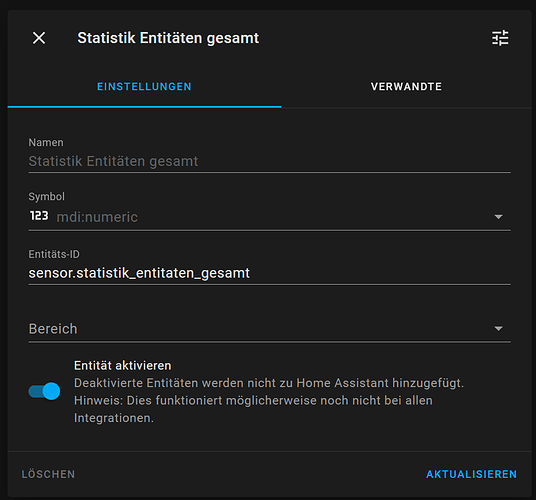 1. How do I set the entity_id?
I thought the value set for unique_id would be used for this. I don’t want (initially!) the entity_id to be based on the entity name. That has a few downsides like trash being sent to the InfluxDB, additional manual steps etc. etc…

What I found (and couldn’t imagine this really is the “new and recommended way” - really guys?!?):
I need to do this manually after creating the sensor using customization.yaml or the UI. That’s a big step back dear devs. Almost doubles the work… I tend to switch back to the old format, same situation like Mutt in Use of new (template) sensor/binary_sensor format - #13 by Mutt.

I thought the value set for unique_id would be used for this.

It uses name to create the entity_id.

How to set the availability?

All it requires is a template that, after evaluation, reports either true or false. Whatever you put in the template simply has to adhere to that requirement.

Whereas an automation has a this state object, with various properties, it doesn’t exist in Template entities

Your first statement is false and your second statement is moot because it reflects the status quo (i.e it also applies to legacy Template entities).

I would agree with you if you weren’t being sarcastic.

Add a unique_id, name, and friendly_name (in attributes) to set all 3 initially. Otherwise, use customize or set name (for entitiy_id) & unique_id, then change the name in yaml, then reload.

Your first statement is false

That is with the new style of creating a template sensor it is impossible to set the initial entity_id. Proof me wrong. I could not find a way.

Otherwise, use customize or set name (for entitiy_id) & unique_id, then change the name in yaml, then reload.

That’s exactly what I meant by saying ‘Where’s the big improvement here?’. There’re (still) additional tasks required. Compared to the legacy method those are just other tasks, but not less…

Add a unique_id, name, and friendly_name (in attributes) to set all 3 initially.

I tried that, but what do you mean by “in attributes”? I don’t know how to do this. Using it regularly “the oldschool way” gives an error

Now I’m really excited to see how to solve this. I’m not an expert, a plug’n’play yaml code snippet would shorten things a lot. I’m not the first (that’s probably Use of new (template) sensor/binary_sensor format) and for sure not the last one looking for a solution for this.

That is with the new style of creating a template sensor it is impossible to set the initial entity_id. Proof me wrong. I could not find a way

I think you’re blowing this out of proportion… relax and just try to solve your problem by asking questions. No need to complain on top of it.

That’s exactly what I meant by saying ‘Where’s the big improvement here?’. There’re (still) additional tasks required. Compared to the legacy method those are just other tasks, but not le

The improvement is that you can now use triggers to update template sensors, which many people wanted. You can still use the old template style. You don’t have to use the ‘suggested way’.

It has to go inside attributes.

You know, when I switched from the “old” method to the “new” method I struggled with this as well. The entity ID always comes up as whatever the name of the sensor is, but parsed to be properly formatted (i.e., Bedroom Motion Sensor becomes sensor_binary.bedroom_motion_sensor).

At first it was annoying because I didn’t see it as a direct replacement, then I considered that any other device added to HA, such as Insteon, Z-Wave and others, force you to rename the entity in the UI if you want it some other way anyway. So, when you think of it, template entity_id’s were outside of the norm when they were implemented, the new format brings it back in line with other entities.

In the end, I just switched everything over to the new format, making notes of the old entity ID’s then went in and edited those sensors to set the entity ID to whatever I wanted to.

In the end, you could also stick with the old method instead. I’m not sure when that goes away forever, but you can still use the old instead of the new.

I’m not sure when that goes away forever, but you can still use the old instead of the new.

No plans to remove it.

It has to go inside attributes.

Still does not work.

Up to now I thought I just don’t know how to. Meanwhile I think it’s not possible. Too bad cause I need to create a lot of template sensors and every additional step after the initial configuration in .yaml is a bit of a pain tbh.

Was that created from scratch or was it existing? If it’s existing you have to edit it from the UI.

And the old entity probably still exists but is not available. I had to delete my old ones in the Entities UI before I could set the new templates to have the same entity ID.

Here’s an example of how I went from old to new:

If you create the new templates properly, then can takeover the old template entity. I forget how I did it, but it’s possible.

Then use the old format

, no one is forcing you to switch.

Perhaps this is the problem. I believe that both cannot exist at the same time, it’s all or nothing. You either do all old method or all new, if you mix them you end up with old and usually no new ones. At least that was my experience when I tried to have both side-by-side.

You can mix and match, as long as the unique_id’s are unique. Everything is converted to the new format and pushed through the same code.

Then I must have messed something up, I had lots of problems until I just converted every sensor/binary sensor to the new format and wiped out the old stuff.

OK. I was assuming this simple thing is possible with the new method - and it was looking good with your friendly_name inside the attributes. But as it does not work… I need to live with additional steps.

This way is not perfect but at least I can use the new format which might bring some pro’s in the future.

I will update the topic name as I focussed on two main things:

it is impossible to set the initial entity_id. Proof me wrong. I could not find a way.

What you seem to be struggling with is making the sensor’s friendly_name and entity_id very different. That’s done via customization, like for most other integrations (also explained by CO_4X4). For example, I didn’t care for the entity_ids the Hue integration produced for dimmer switches so I changed them via customization.