I decided to just write this up for other folks who are on the fence about making the move. I am not a home automation novice in any way, I’ve been geeking my stuff out for decades through multiple home automation platforms (I even still have a couple X10 devices hanging around). And, while this worked, it is not cut-and-dried. Fortunately my home is a mix of a bunch of technologies, with Insteon still reigning supreme on my light switches, so being without Z-Wave for a day or two isn’t the end of the world (but it’s a bit annoying). The entire process just feels BETA to me, honestly.

So, I decided to pull the trigger since I had some free time today to finally make this migration happen. I was going to wait on a migration assistant but it doesn’t seem that is a very high priority and I might be waiting a while. Since I knew I could always just restore HA to before I migrated I figured no harm, no foul. The worst part is renaming a few hundred devices (or at least I thought it would be until I wrestled with the MQTT system all day long).

I followed Petro’s instructions to the letter and opted to use ZwaveJS2MQTT version because part of what I wanted to have is the ability to have greater control over my Z-Wave devices and that capability is more limited in the baked-in ZwaveJS. Perhaps the process is less frustrating by skipping this and just installing the ZWaveJS, I don’t know.

Before diving in I checked on ZwaveJS device support by looking up my devices (especially my most crucial devices) at the ZwaveJS Office Device DB.

Some notes about my experience:

So for me this is a bit of a trade off (and my willingness to do so is yet to be determined - I may yet return to OZW 1.4 until JS gets further along) of gaining a bit better Z-Wave network performance (and my experience is that it is only a bit better, not the significantly better that was implied) and the ability to tweak settings in exchange for losing quite a bit of function on my Z-Wave devices.

In all I’ve lost about 1/3 of my Z-Wave entities, many of which were used in various automations. None of them critical, but now they are gone. Aeon Power Strips should have FIVE switches, one for the entire power strip and four for the four controllable outlets, now I have just the outlets (again, why not add that extra switch?). The power strip becomes more of “quality of life” since I can just turn off all four switches to effectively turn off the entire strip, but I had that with the antiquated OZW 1.4, how could this not be a part of ZwaveJS? Those are just two of about 200 or so missing entities, some more useful than others. Once again, discussions with the developer shed some light on the fact that some of the functionality that was available to me in OZW 1.4 may have been “hacked in” so that it existed in the first place, rather than being part of the core Z-Wave definitions. I understand that can be hard to track down. Without looking at the definitions of the power strip itself, though, it seems like this switch should be there.

In conclusion, the ZWaveJS with the MQTT seems to work OK but it a decent hassle to get it working. I’m a pretty technical guy and this was a struggle. It’s not like I had to constantly tweak things, but the instructions are not the ABC’s of migrating, it’s the Cliff Notes that point out the most important bits. One thing that I do know is that once I got all my devices recognized things settled in and worked fine for the most part. I think that if your network is very basic, has no battery operated Z-Wave and doesn’t use anything more than basic switches and lamp controllers then this is a piece of cake, but the more advanced your Z-Wave network the more advanced your headache of implementing ZwaveJS is (and be ready to potentially sacrifice some device capabilities - which is more compounded by how much you rely on those for your advanced home automation).

ZwaveJS has tremendous potential, and it certainly works, I think as it matures it will become even better than it is now. While there is some loss in functionality, it’s not critical functionality (even for me who does a lot with those extra entities), so the benefits of ZWaveJS over OZW 1.4 weighed against the detriments of OZW 1.4 alone make it a bit of a wash, but it’s a wash that promises future development and improvement where there is and never will be any for OZW.

Thanks @blhoward2, this is a bright future of Z-Wave for HA. Like all things, it will take time to be fully dialed in but it seems like all things are moving in the right direction.

It sounds like you have some bad routes causing your discovery delays. That issue isn’t normal, nor is your experience. Your mesh is far from healthy. Try healing the nodes one by one starting at the ones closest to the hub and working out.

There should be no capability loss as we support all of the ozw CCs plus some. If you’re having a problem open an issue on the project so we can fix them.

Perhaps, but since it always worked without any issues whatsoever in OZW 1.4 I don’t think it’s that messed up. I’m sure it could benefit from being optimized, but honestly my experience was more sullied by the loss of function of so many devices than spending an entire day fussing with the control panel.

I’ll open a ticket on the Wallmote, it is 100% useless in ZwaveJS as-is. And I have quite a few of them, so it’ll be lots of coding to read Z-Wave traffic to figure out what button was pressed and how.

Scratch that, I can’t open the ticket on Wallmotes. You have a general post on February 4th of the list of devices to be supported “in the next few weeks” and the Wallmote Quad is one of them, and to “not open a ticket on these”. Of course, it’s been more than a few weeks but I’ll respect the request not to open a ticket anyway.

You also mention “help needed”, I’m quite capable and willing to assist. I am a developer and quite experienced in home automation.

I think I already have a pending PR for the wallmotes. Or most of them anyway. There may be a newer one or two I’m missing. But a missing file shouldn’t affect functionality so if it’s not working you should report that.

RE the help I’ve had a few people start helping but I think only one person has finished templating an entire folder.

Are you using HomeAssistant?
If yes, please open your issue at Issues · home-assistant/core · GitHub
UNLESS a developer told you to come here.

So which do you want me to open that ticket on?

It depends on the issue. Generally we send people to HA first and they send up to us if upstream, but what’s the issue?

The Wallmotes only functionality in HA is to report various power parameters, zero entities for the various ways to actually use the Wallmote. It’s four buttons as the core, but they support long presses and swipes as well (swipes I understand, they are more complex, but even OZW 1.4 could deal with them after tweaking the config file in HA).

As for helping, I’m ready and able to help I just need guidance on what I need to do and the proper procedure to do it. Just say the word 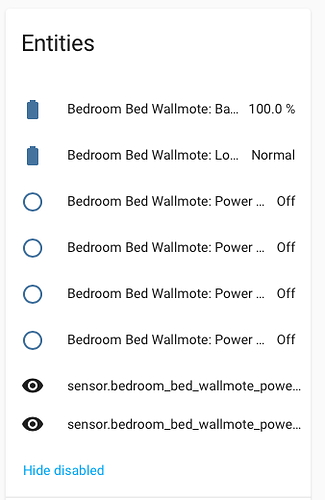 That’s because it sends stateless scene commands. Have you tried watching for an event?

That’s what I’m planning to do to get them working. Regardless, even on non-Wallmotes, I’m willing to throw my hat in if you need it.

Well, that’s not a loss of functionality it’s how they’re meant to work. OZW didn’t follow the spec and created entities for them with a hack to reset the state.

Noted, thank you. I’ve updated my post to reflect that.

RE helping, if you message me on slack we can talk about how you can help.

Oh, on it working on ozw. It working doesn’t mean the routes are good paradoxically. If the controller doesn’t respond the device sends a NIF message that finds a way back to the hub. But it doesn’t update the route so it has to do that every time. That slows it way down and increases network congestion.

This is the reason why I stopped trying. I do appreciate the effort people put into the whole z-wave items and it is getting better and better. But to keep the wife happy it needs to work 99.89% of the time. Get yourself a Fibaro Lite. Costs around 99 euro here and you can hook up all your devices, heck you can even firmware upgrade your fibaro devices. It connects just fine with home assistant via the api and delays are non noticeable. To top it off (this is my best thing) you can make a backup in the cloud of the fibaro (this includes the zwave stick) so if for some reason your fibaro device dies. You buy a new one and restore a backup and all is working again. Since it restores the zwave data too! Fibaro is the only one that i know that can actually restore zwave config to the stick.