I’ve integrated a Nest Hello in to HA using the Device Access Program and it had been working without issue. I have the live feed from the Hello on my Dashboard and, if I open HA either on a PC or iPad, I can see the feed and all is well. However, after a minute or so, the feed now stops being live and just displays a static image. If I close and reopen HA, the live feed comes back but, again, after a minute or so, stops again. This happens on both a PC and an iPad so it is not device specific.

If I tap the card on the Dasboard (which is set for ‘More Info’) then the window opens with the live feed but, when I close that, the feed on the Dashboard is still static.

Odd! Haven’t heard of this before. This is the older wired doorbell camera? Just want to confirm since the newer battery camera models work differently than older models.

Is there anything in the home assistant logs when this happens?
Perhaps looking in the developer tools at the Network tab will tell us something. Are there any failing requestS?

I have the same issue with the nest doorbell. It is the old wired one.
I see the livefeed on the dashboard only for some seconds after I have watched the stream in the popup.
The other old wired nest cams work fine on the dashboard

Edit: My wired nest hello is working again. See the livestream on the dashboard.

Same question to you as above about logs and dev tools output.

Mine is the older wired version and there is nothing in the logs to suggest an issue. As mentioned, this did work when I first set up the Nest Hello on HA, it has only recently started doing this.

One thing I didn’t mention originally was that, if when this happens, if I select another tab on my dashboard and then go back to the one that I have the camera feed on, the card goes completely blank and doesn’t display an image at all, let alone a live feed…

I’m hearing reports from other users of stream trouble today, so sounds like a nest server issue. I don’t have any suggestions for remediation.

Thanks for that but it it isn’t just one day and, as I mentioned, if I tap on the card to get the larger view of the camera, that streams without problems.

Guess I’ll just have to see what happens…

OK, yes, that outage day issue was definitely resolved so not relevant anymore.

I’m having a little bit of a hard time understanding the exact issue. Maybe we can use the terms “image snapshot” and “live stream” to clarify. Is this issue only with the “image snapshot”? or is it also that live stream has issues?

Thanks for your help so far, it is the live stream that has the issue. Hopefully, the screenshot will help, as you can see, I have a card set up to show a live feed from the camera on my Dashboard: 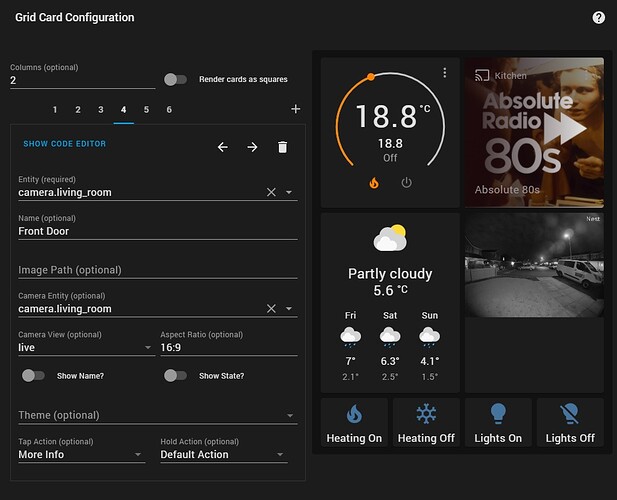 When the dashboard loads, the view is live but after a couple of minutes, the feed stops and I’m left with a still image. If I tap on the card (which is set to ‘more info’) I get the large screen version of the feed appears which shows a live image but the card on the dashboard remains static.

I’ve not been using HA for very long but, when I first set this up, the feed was constantly live, it is only recently I’ve had the issue with it stopping.

I’ve tried removing the card in question and setting it up again but to no avail.

What type of lovelace card is being used? Is this a picture glance card?

I feel like maybe i’ve seen live setting that is enabled here actually go enable the live stream, then cancel it, then renable it, then cancel it which is very heavyweight and likely flaky, so i’m not sure what the point of it is. My impression was that a plain entity card does this with the server side fetching the image and is much more reliable. @uvjustin are you familiar with the difference between auto and live and how they should be used?

@johndon1968 i am curios if your javascript console is showing errors when this happens (e.g. in chrome: More Tools, Developer Tools)

Thanks again for the suggestions, to test I’ve set the existing card to Auto, I’ve created a new picture entity with the camera view set to live.

No errors in the log about the camera at all.