NUC instead of Pi4

My Pi4 unexpectedly died on me a few days ago. Now, taking into account either high Pi prices or long lead times at those who keep old prices, it pushes me to think about NUCs.

I have used Docker, but I am not proficient with it. I have run devenvs and tested dockerized apps inside docker inside Linux VM, inside Windows, but I have never run a 24/7 environment of any importance inside Docker. Seems like too many points of failure, but it may be just my inexperience talking.

Edit: looking through similar questions here and on Reddit, I would probably rather go for a dedicated NUC for HAOS (with possible addons) and another NUC for Dockerized services on a Linux flavor (Debian/Ubuntu).

And, an answer to a frequent question, no I do not run any cameras. I may add one or two in near future, but my system mostly consists of ESPHome-based devices and HA is mostly for presentation and interaction with them.

What are your thoughts on the matter?

Thank you for your time

I’m running an older NUC (d34010wykh) which has an Intel Core i3-4010U with 250GB SSD and 8 GB Ram. At first i ran it as a VM on the NUC but i installed HAOS in the end as i wanted it as an HA server and nothing more. Plus i had some USB issues, which were prob down to something i did but not having to deal with that was a big plus for me.

As for your questions, tom_I already answered most. I’ll just add to those:

You probably don’t need 2 NUC’s - here’s an alternative idea:
Get a NUC, and get Proxmox onto the NUC, and then you can get the “appliance like experience" running a HAOS VM under Proxmox, you can also get all kinds of different containers.

@kanga_who I suggest editing the main post and using @tteck ‘s script to install HA OS instead. It’s an extremely polished script, and more importantly the author is active both here and on Github, he is actively maintaining and improving the script, and if anyone has a specific issue with it, they will be able to get quick help. Worked like a charm for me, and I think it’s something worth considering, since Whiskerz007 seems to have stopped developing these scripts.

… the same thread mentioned tteck’s work, which I have to say is quite impressive. Things you want to achieve but not (yet) available as an add-on in HAOS, you likely find something useful among tteck’s scripts.
Proxmox Helper Scripts | Proxmox Scripts For Home Automation (tteck.github.io)

Not for everyone I know, but if I’m in your shoes I probably would (force myself to learn Proxmox and) go this route.

My HA is running on a dedicated NUC and I love it. It’s fast, it’s reliable and you can store a lot of info on it.

Thank you all for your comments.

HAOS alone if you want maximum stability and 0 issues.

My HA is running on a dedicated NUC and I love it. It’s fast, it’s reliable and you can store a lot of info on it.

I like the zero-issue option. Currently, my system is not so widely spread that I cannot control something without HA integration, but as soon as I add window blinds and the boiler to the setup stability will be paramount.

@k8gg I want to learn Proxmox, Traefik, and some other tools too. Thank you for the valuable resources, but I will go the route of dedicated hardware for HAOS and at some later moment another unit with Proxmox and all the other appliances, like torrents, media streaming, and network helpers, (maybe even a HAOS backup server) on that other unit. That unit might also be a bit more capable than the one that will run HAOS and it will help reduce electricity consumption because all the VMs and Docker are currently running on my main PC.

I installed proxmox on it, and then did the following:

All worked perfectly at that point, took less than 2 hours. It’s much faster, and all works great.

I switched to an Intel NUC i3 about two years ago- it has been the best decision for Home Assistant. I am running native HAOS Generic x-86 image) as this server is exclusive to Home Assistant. It’s remarkably stable and no docker management needed. I have a 500GB M.2 main drive, but only using 4% of it, so overkill. I don’t recall how much RAM is in the NUC, probably 32GB, and probably overkill.

running HAOS alone if you want maximum stability and 0 issues.

Yeah not really, there seem to be a lot of issues with HAOS updates lately, around 8.0/8.1…

there seem to be a lot of issues with HAOS updates lately, around 8.0/8.1…

[image] Home Assistant OS 8.0 stable is available now! Highlights: Use of GRUB2 for UEFI based systems Support for additional Wi-Fi and Bluetooth devices New image: Generic AArch64 for UEFI based AArch64 VMs and boards New image: Home Assistant Yellow For existing installations, no manual intervention is needed! You can safely update without reading these rather technical release notes. Table of contents Operating System Changes GRUB2 for UEFI based systems For Generic x86-64, OVA …

What kind of prices are you seeing on the lower-end NUCs these days?

Why are people hung up on NUC? A PC is a PC. There are plenty of computers with the same or similar form factor.

Up to recently, I did not even know that a NUC is … what it is. But, it is a convenient little device from some perspectives, a laptop without an integrated display and keyboard, a space-saving, and a power-saving device. I would also assume a nightmare when the motherboard dies, similarly to laptops.

From a B2B perspective, you can purchase an integrated third-party UPS which is nice for 100% up-time. When managing a fleet, it’s easier to manage an image with the same architecture (e.g. AARCH64) across all devices as opposed to having to manage multiple images.

Widget that are all the same make life easier

Nucs are not aarch64. Nor are we talking b2b.

Why are people hung up on NUC?

I have three NUCs in my basement (on a UPS). One is Home Assistant, one is for Plex and the last is running Ubuntu for those things that Linux does better than Windows.

They have been running for two years without a single moment of problems.

There is also a Raspberry Pi3 which is my MQTT broker and a Viewsonic VOT133 (Point of Sale) PC that is a small NAS. The Sonic is slow, but it runs Ubuntu and only cost $35 on eBay. 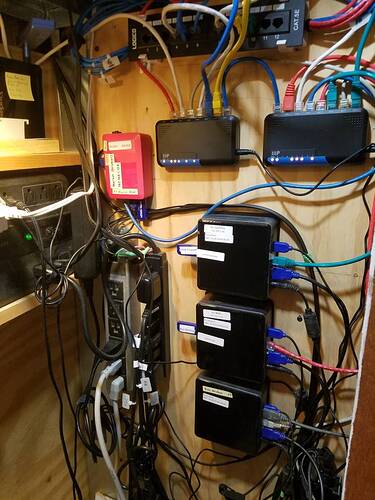 That doesn’t explain why you chose nuc over the many alternatives.