I recently received my HA Blue (Odroid N2+) and yesterday finally got around to migrating HA over from my Raspberry Pi 4. Overall taking a snapshot of the PI4, reallocating the IP-address from the PI4 to the HA Blue, moving Zigbee/Z-Wave dongle over, restoring the snapshot and updating went fairly smooth.

One thing I am a little worried about is the longevity of the built in 128 GB eMMC module in the HA Blue. On my RP4 I had used an external SSD for booting/running HA which has built-in wear-leveling of the individual flash cells, thus I wasn’t worried about problems like Micro SD-Cards reaching maximum write-cycles and breaking.

Is my understanding of the HA Blue eMMC module correct that it doesn’t have comparable SSD wear-leveling? While looking at Hardkernel’s website I couldn’t find information on expected lifetime of the eMMC. Does HA plan to use a file system to store frequently changing data which is optimized for eMMC to spread out writes among flash cells? I had previously changed HA recorder settings to commit_interval of 30, purge_keep_days 5 and excluded quite a few sensor entities to reduce writes but snapshots still are ~300+ MByte. Is there anything else I can do to extend the life expectancy of the eMMC module?

eMMC does use wear leveling. Apparently there are even tools to read the current lifetime expectancy: https://forum.odroid.com/viewtopic.php?t=30081

Thanks @ronaldheft, that is definitely good to hear. I did some more searching and found the following relevant information which appears to confirm this from Odroid and more background on eMMC. 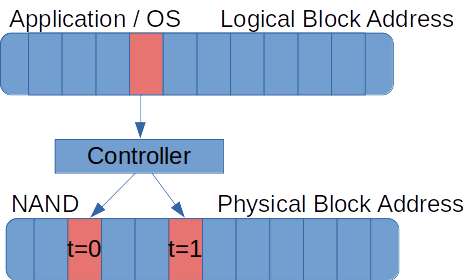