I’m puzzled because that error message appears to be from the python_script integration which runs in a sandboxed environment and disallows importing of any library. Only an external python script, executed from the command line (which is what the command_line sensor does), can import libraries.

Well, nevertheless it imported the ‘python-aqi’ library.
Repeated attempt to install ‘python’aqi’ via python_executor in HA results in message that it’s already installed…
And, as I mentioned, I am having several scripts running with ‘import requests’, that was installed same way.
Any other idea?

I was able to get it to work on my test system.

My test system uses Home Assistant Container so I had to install the python-aqi library within the homeassistant docker container. I used Portainer to login into the container’s command line interface where I ran pip install python-aqi.

In order to make it easier to test, I used an input_number

py-aqi.py is exactly the same as I posted earlier: 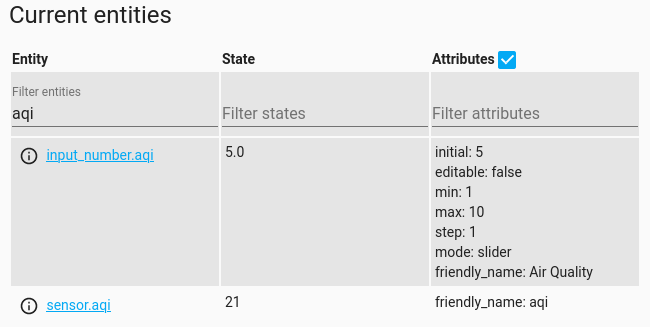 If I increase the input_number’s value (and wait for the sensor to poll) the sensor reports a new calculated value:

So it does work but, due to a difference that’s not apparent, it doesn’t work for you. All I can suggest is that you review and compare the differences (if any) between how I configured it and how you did.

That’s strange…
During manual execution of my script via Python Executor result is:

As I mentioned above when I try to install ‘python-aqi’ it says it’s already installed.
How?

UPD:
When I point in Python Executor config the following:

I receive the result:

So it works!
After removing ‘python-aqi’ from requirements of this Add-on (after Hassio reboots), it reverts back to message

When launching the script manually from Python Executor.

Is this some kind of temporary installation of ‘python-aqi’ via Python Executor?
How can I install it permanently?

I don’t know anything about “Python Executor”.

If you installed Home Assistant Supervised in a virtual machine, the python-aqi library must be installed in the homeassistant docker container. If you are installing the library in the host operating system, Home Assistant cannot access it.

Which installation method did you use?

I am using Home assistant VM under VirtualBox (VDI image from HA site). How can I install ‘python-aqi’ manually there?
Thanks!

How can I install ‘python-aqi’ manually there?

The way I explained above, in the homeassistant docker container.

Once the library is installed in the homeassistant container, it will be available to Home Assistant. However, containers are temporary and are replaced when you upgrade Home Assistant. That means each time you perform an upgrade, you will have to re-install the python-aqi library.

I use Portainer to manage all the docker containers used by Home Assistant OS (and Home Assistant Supervised). Portainer allows me to open a console into the homeassistant container where I can run pip install python-aqi to install the library.

You could also take a look at appdaemon, there you can import libraries and they are not lost after an update of HA.

I have 0 containers as I’m using Hassio.
Is there smth I’m doing wrong with Portainer?

I have 0 containers as I’m using Hassio.

It’s no longer called hass.io and was renamed to Home Assistant OS which hides its containers.

In Portainer, go to Settings > Hidden containers and remove any filters that you may find there. 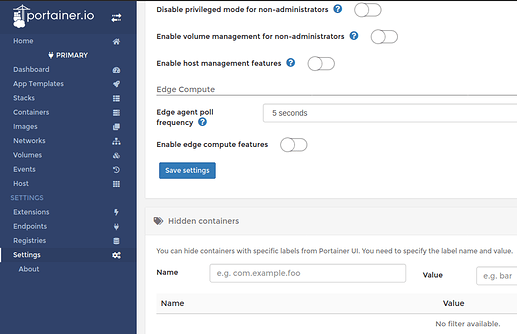 After you’ve cleared any filters, the Containers list should show all docker containers related to Home Assistant (and all Add-ons). 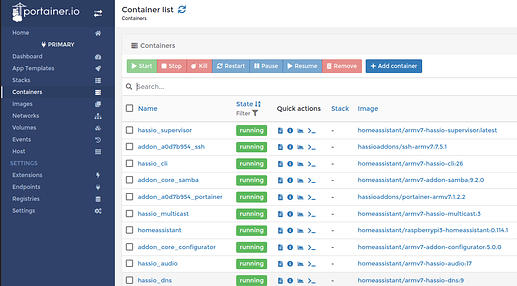 The one we are interested in is this one:

Yes, I managed to get Containers displayed only after I unhid Hassio Supervisor.
‘Homeassistant’ container was inhid, however it’s still not displayed in Containers list.
Is this a bug of Portainer?

I installed ‘python-aqi’ library as you suggested in ‘Hassio Supervisor’ Container, though in fact, nothing changed. Scripts report that ‘aqi’ is still not found.

UPDATE: I unhid all Containers, then only ‘homeassistant’ container appeared in the list (maybe there are some dependencies):

Now it’s working! Thank you! I will try to pass the variable now.

I’m happy to hear you were able to install it in the correct container and it works. I have confidence that the next step, involving the command_line sensor, will also work correctly.

Thanks! I did it!

Update:
Installation of Python Library in HA via Portainer works only before next reboot.
After reboot you need to reinstall again… Some kind of inconvenience.

However, containers are temporary and are replaced when you upgrade Home Assistant. That means each time you perform an upgrade, you will have to re-install the python-aqi library.

That’s also why I recommend using AppDaemon for python programs as these changes will not be gone after a reboot/update.

works only before next reboot.
After reboot you need to reinstall again

I’m not seeing that behavior. I have it installed in my test system which is turned on only when I need it. The docker containers are regularly started and stopped. None of that affects the ability to use the python-aqi library.

The library is installed in the homeassistant container. If that container is replaced (such as after an upgrade or on demand to re-create the container from its image) then the library will be eliminated. Otherwise, a simple stop/restart of the container (such as caused by a reboot) won’t lose the library.

Sorry, maybe it was after I updated HA version. You are right, reboot causes no problems.

Would you please advise on how should I denote several arguments to my script that looks like this now?:

In ‘configuration.yaml’ I tried

Why did you use double braces {{ in some places and a single brace { in others?

You should be using double braces only. They serve to indicate that the enclosed expression is a Jinja2 template. Single braces are for an entirely different purpose that’s not applicable in this case.

In addition, the arguments should be separated by a space character and not a comma.