Summery: Allow Users define polygon zones for large areas that are in close proximity to other zones. Examples of theses types of places could be University and company campuses or business parks.

Some Ideas on how to do it: I have thought of one way of doing it and that is to have a tool on the home-assistant site that will mainly do the work client side that will allow the user to select a way from Open Street Map to be a polygon, this will the fetch the Info from OSM and encode it in a way home assistant can understand, this could be a YAML Dictionary or JSON. this would the be used along side the existing zone lat long and radius making them optional or ignored if using polygons.

The reason for having a tool on the site would be to reduce the load on OSM’s servers as people will only get the data once instead of on every reboot, it is also easier to select it from a map than to use the Map data layer on openstreetmap.com to get the way number

Just did a tad more research, we could allow geojson for zones as there seems to be tools that exist to make osm data in to geojson data

Hey, do you know if there’s something new on it?

That’s can be interesting… 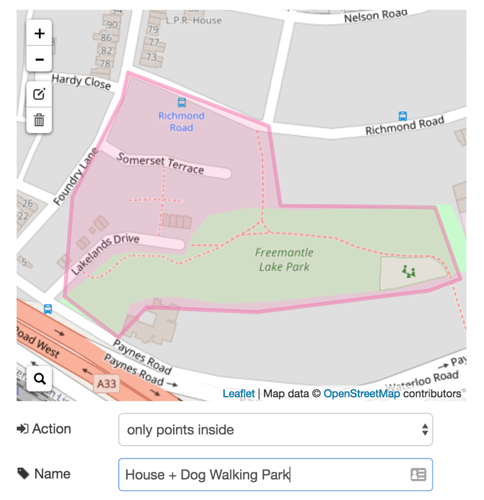 i am also very interested in more flexible zones

Would be perfect,you can use tools like http://geojson.io/ to generate a geoJSON file of polygon zones, which we could then use with HA

I know it’s old, but I really want this feature too.

Please implement this. I would like to set a zone around our high school but doing it with radius is going to mess up other tracking.

Zones that are not circles Feature Requests